In November 1913 Alvaro Obregón ’s forces captured Culiacán, the capital of Sinaloa, thus securing the supremacy of the Constitutionalist Army throughout the entire area of Northwestern Mexico. It was in Culiacán that Obregón authorized his first issue of currency, a series of notes ($5, $10, $20[image needed] and $50), dated 23 April 1914, that the Paymaster General would repay within a fortnight of that date.

These notes bear more than a passing resemblance to the ones that Riveros had already issued in San Blas and Culiacán, and one can perhaps see a desire to impose a generally accepted template. These notes and the subsequent series had the printed name of Obregón and the handwritten or stamped signature of Chief of Staff (Mayor Jefe de Estado Mayor) F. R. Serrano. 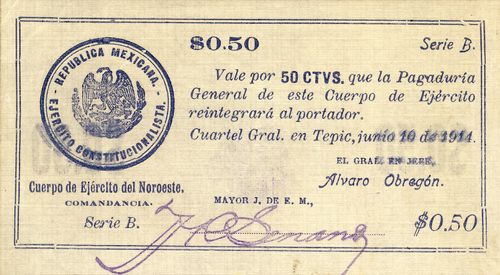 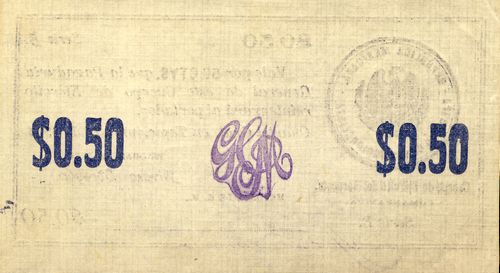 In early July, Obregón moved south to Jalisco, where his troops defeated the federal troops. He then moved on to the capital. On 11 August he signed the treaties that ended the Huerta regime and on 16 August his troops marched triumphantly into Mexico City.

When Luis Herrera took Parral in Chihuahua in November 1915 he included the notes amongst the issues he declared to be of forced circulationAMPar, Gobierno, Jefatura Política y Presidencia Municipal, Correspondencia, caja 71, exp 2.

A $10 1 May Culiacán note is known revalidated by the Prefectura Regional with a  blue circular (43.5mm) rubber stamp with the legend ‘PREFECTURA REGIONAL DEL PARTIDO DE LA CAPITAL - SAN LUIS POTOSI’ and an eagle in the centre, together with a three-line inscription ‘Este Billete es de circulacion forzosa. S.L.P.....1915 E.P.R’ and the stamped signature of J. Rangel. 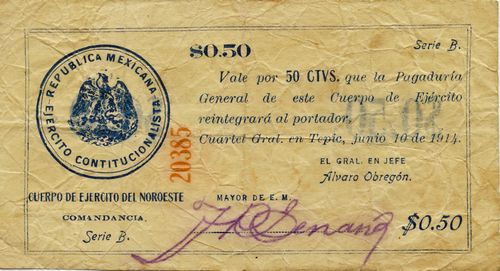 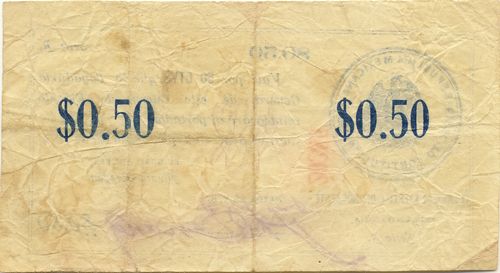 On 1 June 1915, in its circular núm. 28, Carranza’s Secretaría de Hacienda announced that since the reason for the fractional notes issued for the campaign needs of the Cuerpo de Ejército del Noroeste had passed, they would be exchanged in the Tesorería General de la Nación for fractional notes of legal tender or their equivalence in Constitutionalist notes.

On 18 September the Secretaría announced that until it had sufficient funds to exchange the notes issued by Obregón and Diéguez Carranza had decreed that these would continue to be of forced circulation. Two days later the Jefe de Hacienda in Guadalajara, Gabriel Vargas, stated that the notes still remained of legal, forced circulation, until they were exchanged in his Jefatura. In this respect these notes were in a better position than others that had to be deposited in the Jefaturas in exchange for receipts, to be redeemed at a later date.

On 14 October Manuel M. Diéguez, in Guaymas, Sonora listed as of forced circulation the Cuerpo de Ejército del Noroeste notes issued in Guadalajara but said that the earlier issues should be withdrawn as they were no longer in circulation.

On 24 July Carranza decreed that from 1 August they would exchange the notes listed in the decree of 28 April that had been deposited in the offices of Hacienda with infalsificables at a rate of ten to one. However, on 4 September 1917 Carranza expressly forbad speculation in the Tepic and Guadalajara notes (in a list that repeated all the acceptable issues), so they might have had quite a shelf life.