The bank’s head office was in a custom-built single-storey building with a classical facade in calle Comercio (now avenida Obregón) that opened in 1900. The building was later the Banco Nacional for thirty-four years, then put to a variety of uses until finally being restored and it now houses the Archivo de Registro CivilBy 1900 the bank had bought the house of José Maria Gandara in the Plazuela del Pariancito as offices, storage and manager’s accommodation. 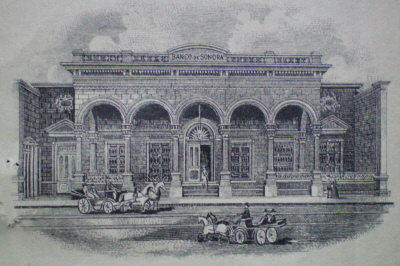 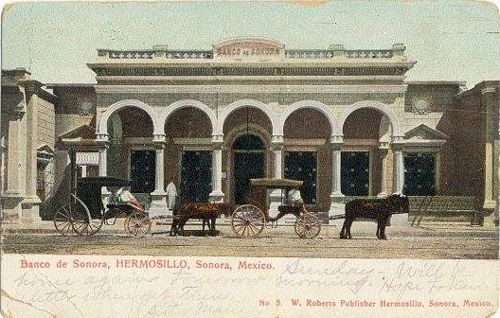 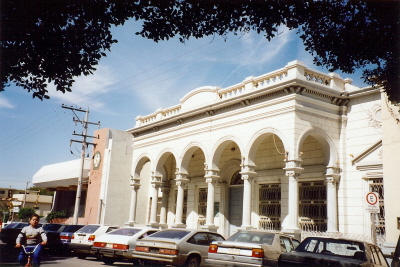 The bank opened branches at Alamos, Agua Prieta, Ascención, Cananea, Guaymas, Naco, Nogales, Quito, and Vaguita in Sonora, Ciudad Chihuahua in Chihuahua and Culiacán in Sinaloa and had agents at Altar, Magdalena, Arizpe Ures, Navojoa and Sahuaripa all in Sonora, and at La Paz in Baja California.

Cananea: Max Müller visited Cananea in July 1907, supposedly with a view to establishing a branch in the townEl Tiempo, 6 July 1907 so this branch will have been established after that date. Manuel Mascareñas reported that the bank moved into new premises in Cananea in November 1911MM papers, copybook, vol. 2, p148, Mascareñas to José F. Guajardo, Cananea, 3 November 1911.

Guaymas: This branch was opened in March 1900 with Luis Martínez as manager. John (Juan) Ashton Heap, who also served as the British consul in Guaymas, was the manager from [ ] until early 1912 when he resigned in order to devote more time to other business affairsTucson Daily Citizen, 24 July 1912. Photograph courtesy of Alexander Heap. By June 1914 Heap was vice president of the Blochman Commercial and Savings bank of San Diego, and travelling in Sonora on behalf of the bank. The Blochman bank specialized in handling Mexican exchange, and did business with both Huerta (in June 1914 transferring 100,000 pesos from Mexico City to Federal troops at Ensenada) and the Constitutionalists (Tucson Daily Citizen, 3 June 1914). Heap was succeeded by Henry Bartning, Jr. 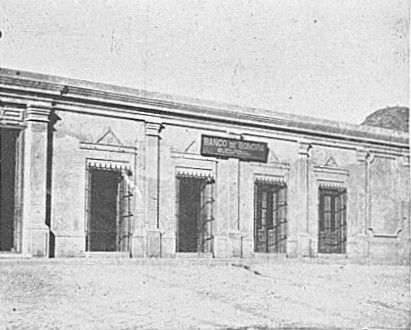 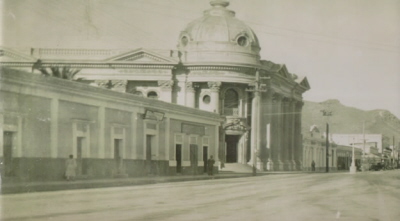 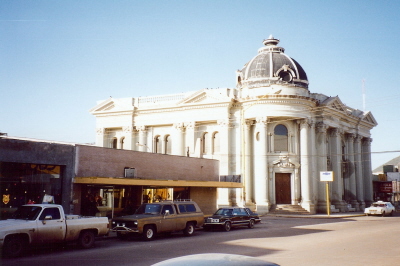 The bank was originally housed next to the premises of Francisco A. Aguilar, Sucesores, on the corner of calle Real (now avenida Serdán) and calle 22, but then moved to a custom-built building on what had been the site of Juan. R. Möller’s ‘La Moda’ at calle Real and calle 21. This neoclassical building of tall windows and Corinthian columns capped with a cupola, though now unoccupied and falling further into ruins, is still one of only two structures of merit on the town’s drab main thoroughfareFor a description of the bank see Pedro García Valdez, Banco de Sonora, sucursal Guaymas, Guaymas, 1991. This video shows its predicament in 2010: since then the roof has fallen in and the cupola was destroyed in hurricane Newton in September 2016. 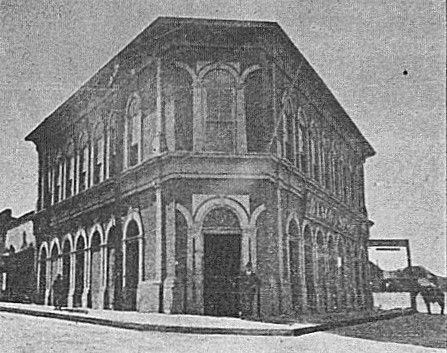 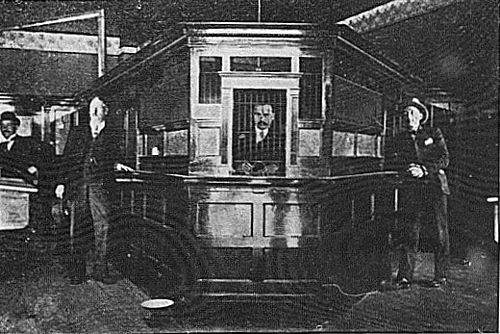 As Ramón Corral was a major shareholder the bank was able to continue to operate in Chihuahua whilst the Banco Minero acquired all the other banks in that state. Alberto Mascareñas was sent to set up this branch in 1902 and it was opened on 6 June 1903letter of interventor Ainslie, 9 July 1903 in Memoria de las Instituciones de Crédito correspondiente al año de 1903, when Leon I. Escobar was contador. The Swiss Andreas Pfeiffer was manager until 17 August 1906 when he handed over to W. C. WinegarEl Correo de Sonora, 17 August 1906. Alberto Mascareñas Navarro was cajero in 1904.

As the branch was in another state, it originally overprinted the notes it issued there, but the only notes known so overprinted are dated 1 July 1903.

The bank moved into new premises in the Sisniega building on the corner of calle Libertad and avenida Independencia (Libertad 101) on 2 August 1908Chihuahua Enterprise, 1 August 1908. On 4 June 1910 the Chihuahua Enterprise announced that the bank was not going to open a branch in Parral.. 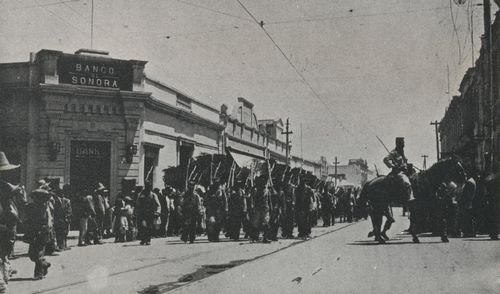 The Chihuahua branch, through its sub-manager, Leon Escobar, supported Orozco's rebellion in 1912. J. N. Amagor, in his report, stated that Escobar had proclaimed that he would give up his Mexican citizenship if Madero’s government triumphed. Also, a rich but incapacitated heir, by the name of Miller, had $300,000 deposited in the Chihuahua branch, earning 4% interest. Escobar told Gonzalo Enrile of this deposit and a judge agreed to changing it into Orozco’s bonds, since they offered 5%ST papers, Part I, box 4, report, 20 July 1914.

Winegar held opposing views. On 19 October 1913 Silvestre Terrazas recommended Winegar to Villa, mentioning that he was almost the only banker in the city who had supported their cause and saying that he might need protection if the others tried to take revenge when they saw they had lostST papers, Part I, box 83, 19 October 1913. At the outbreak of the revolution Winegar moved to El Paso, worked as manager of the Sonora Bank & Trust Company, and then took up residence in Los AngelesWinegar was later manager of the Banco Nacional de México in Ciudad Juárez in April 1935.

On 6 December 1913 Carranza ordered the bank to re-open its branch within thirty days and when it failed to comply Governor Chao confiscated whatever assets remained. 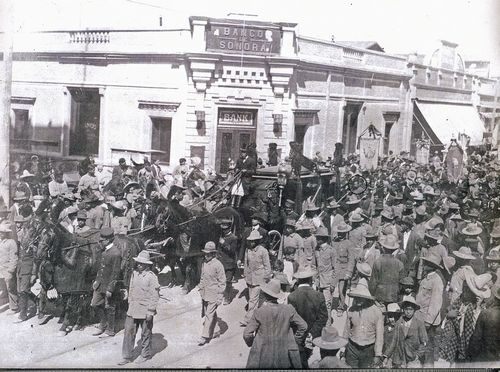 In 1914 the body of the murdered governor Abraham Gonzaléz was brought back to Chihuahua for a ceremonial reburial. Villa walked, openly weeping, behind the hearse and there is a memorable photograph of the cortege as it passed the branch of the Banco de Sonora. Villa is circled.

Culiacán, Sinaloa: On 30 November 1909 the board decided to establish a branch in Culiacán, with Henry Bartning Jr as manager and on 16 December Francisco Rivas was taken on as cashier (cajero)AGHES, Archivo General de Notarías del Estado de Sonora, tomo 2, exp. 259, f 264, 12 August 1910 - Miguel A. López. The branch opened for business on 12 February 1910informe of interventor Monteverde, 22 February 1910 in Memoria de las Instituciones de Crédito. Little is known about the branch, but an important part of its clientele was foreign investors. For example, on 21 September 1910, the American James H. Trewin gave Bartning power of attorney in a land deal (ASIN, Nicolás Tortolero y Vallejo, 21 September 1910) whilst on 2 November 1910 Bartning sold the Capitan mine to the American J. Q. Keter for $2,000 (ibid, 2 November 1910). As the branch had to compete with other well-established banks in Mazatlán and began operations just as the revolution was about to break out it was never particular successful.