In 1943, during the Second World War, Mexico was again faced with an acute shortage of fractional coinage, especially the 50c denomination. To relieve this situation the government authorised the banks and local Chambers of Commerce to issue cheques with the printed denominations of twenty-five and fifty centavos.

In Hermosillo the local paper, El Pueblo, referred to the various different private issues of red, blue, yellow and cream as “confetti”This might also be an allusion to the practice of splitting $1 Banco de México notes in half to create fractional currency. These 25c and 50c notes drove out any remaining small denomination coinsEl Pueblo, 15 December 1943. We know of one issue, a 50 centavos note issued by the Cámara de Comercio and dated 17 November 1943. 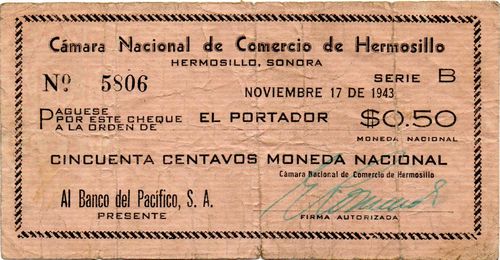 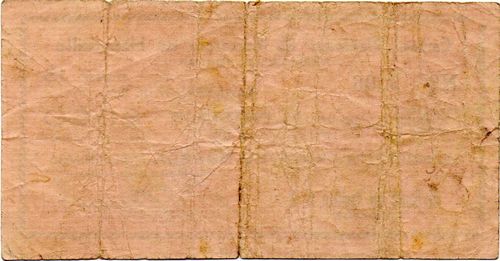 Elsewhere people resorted to other means. In Ciudad Obregón they cut $1 Banco de México notes in half, a practice that was also accepted in HermosilloEl Pueblo, 15 December 1943 whilst in Nogales they made use of American coins, one U.S. cent being taken for five Mexican centavos and the U.S.nickel standing in for twenty-five centavosEl Pueblo, 22 December 1943.