(This section is the result of research by Robert Perigoe. The information originally appeared in the March 2018 issue of the Journal of the U. S. Mexican Numismatic Association).

This is the first of the three issues that used the red state seals, bearing a hand holding a torch, usually referred to as hand seals or torch seals. My study group was meager. It included 36 examples, of which 17 are actual notes. Nineteen are reproductions, albeit four different types, but most of them (11) represent identical print runs and positions.

Another foolproof way to identify the four positions is to examine the background printing. For decades these peculiar cross patterns have enabled (or plagued) any detailed study of the many issues of typeset Sonoran postal stamps or fiscal stamps of the revolution. The pattern of the crosses is clearly set out in Follansbee’s workNicholas Follansbee, The stamps of the Mexican Revolution 1913-1916, Collectors Club of Chicago, Chicago, 1996 “The type elements composing the background show an X surrounded by four little circles, one of which is further from the centre than the other three. In the settings given below, each type element is referred to by its orientation.”

These crosses are found in the background of the reverse sides of these notes. (These types should not be confused with print positions, although B does appear in both.) In all four positions, every cross is typically type B. In Position A, there is no exception to the pattern.

However, in the next three positions, there is one exception each time. In Position B, in the third row from the top, second column from the right, the cross is is type L. 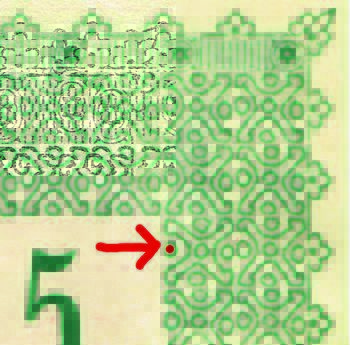 In Position C, in the top row, second column from the left, the cross is type R.

In Position D, in the bottom row, seventh column from the right, the cross is type R.

The five different hand seals are shown above. The images on the stamps are considerably clearer than those that appear on the currency, which tend to be too heavily inked to show detail. (It is interesting to note that there were also some large swaths of over-inking on the red mountain seals in series 4 of the five peso notes printed later on.) It is not unusual to be satisfied with identifying the outer shape of the seal, if there is a bump or a notch. Some other differences that may be discernible include the shape of the shadow of the fingers on the hand, the shading on the ribbon at thebottom, or the shape of the leaves on the laurel branch at the left.

Hand seal type 2 is found in Position A, type 3 in Position B, type 4 in Position C, and type 5 in position D. However, they are typically far too hard to distinguish to be of much use in determining the print position.

In summary, the four positions can be distinguished thus: