Military and municipal issues in Sonora 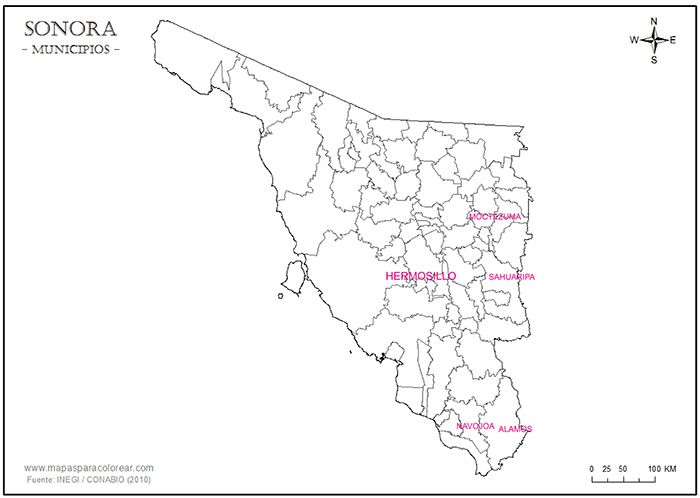 We know of four issues from military or municipal commanders.

On 9 August 1914 Coronel Ramón Gómez rose in revolt at Navojoa with the forces under his command, disowning Carranza and proclaiming for Maytorena. Gómez removed all the federal and municipal employees whom he considered hostile to his cause and replaced them with his own supporters. He authorised an issue of vales to pay the costs of his troops and extended his sphere of action as far as the city of AlamosFrancisco Almada, La Revolución en el Estado de Sonora, Mexico, 1971. 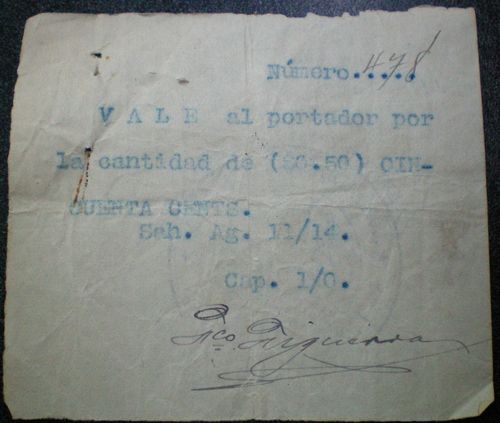 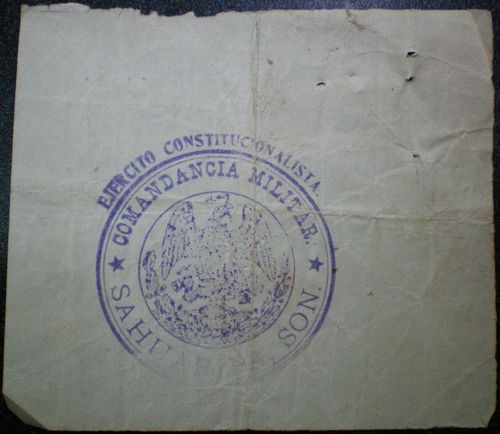 On 21 August 1914 the Prefecto of Sahuaripa, Federico Meza, reported to Hermosillo that the local army was using scrip as a temporary measureAGHES, Fondo Oficialidad Mayor, tomo 2993. The one surviving 50c note is 75mm by 85mm, numbered 478 and signed by Captain Francisco Figueroa. 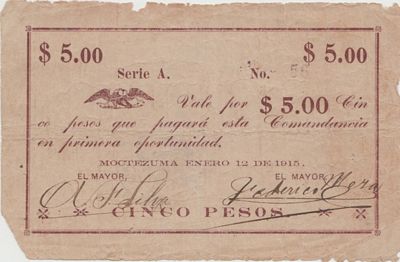 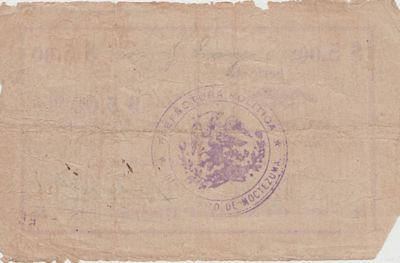 Notes were later issued to pay the troops in Moctezuma and we know of a $5 note dated 12 January 1915 signed by [ ] Francisco Silvas and Federico Meza.

On 28 January 1915 the Presidente Municipal of Banámichi asked whether the notes (billetes o valores) issued by the Comandancia of Moctzuma and signed by Majors Silvas and Meza were of forced acceptance, as businesses were refusing themAGHES, Fondo Oficialidad Mayor, tomo 3023. The next day the request was forwarded to governor Maytorena in NogalesAGHES, Fondo Oficialidad Mayor, tomo 3023, Año 1915 Movimiento de Fuerzas, letter to Maytorena, Nogales, 29 January 1915, as recorded in AGN, colección Manuel González Ramírez 98/92. Late in February the El Paso Morning Times reported that Francisco Silvas, the Prefect of the Moctezuma district, had issued currency marked ‘Payable at Earliest Convenience’ El Paso Morning Times, 26 February 1915.

On 10 May the state governor was asked to tell the Stamp Office (Administración Subalterna del Timbre) at Sahuaripa to accept the paper money that Prefecto Mesa (sic) had issued to pay the troops under his command as this money was no longer being used and accepting it would help to reduce the amount in circulationAGHES, Fondo Oficialidad Mayor, tomo 3024. 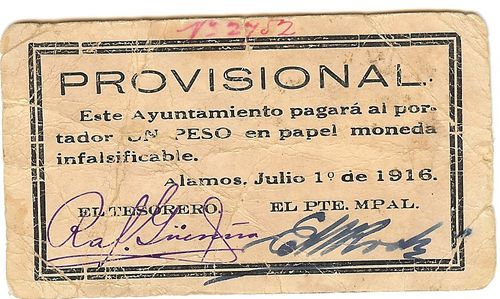 There was a typo 'UN PESOS'. Were all these were signed by Santoyo and therefore a later print run? 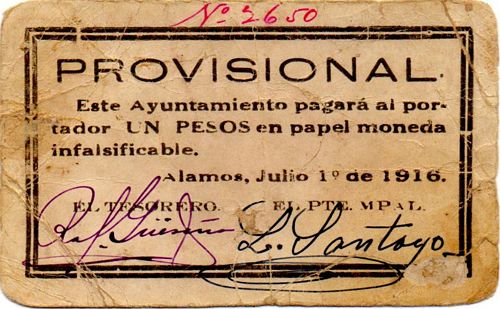 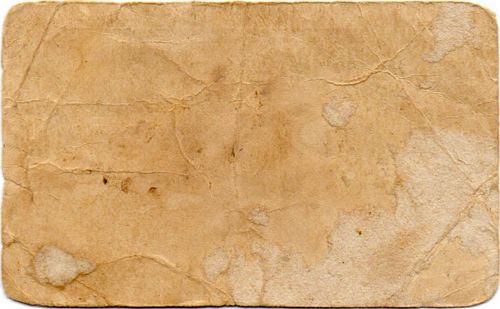 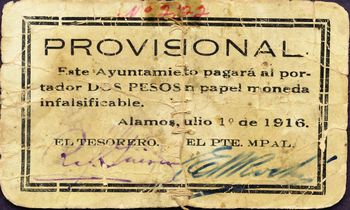 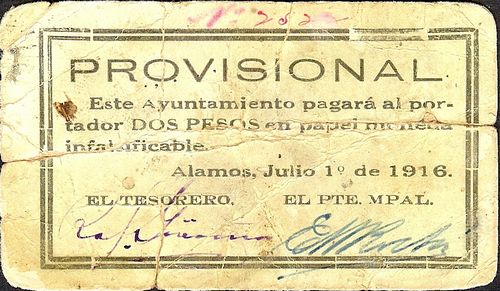 These are signed by Rafael Guereña as Treasurer and either Enrique M. Rochin or Leonardo Santoyo as President Municipal. Rochin was Presidente for the year 1916-1917, whilst Santoyo was never elected Presidente in his own right and must have signed as an interim measure.

As, in an early version of a Truth and Reconciliation Commission, Sonoran public employees had to complete a questionnaire about their activities during the revolution we known something of these minor officialsAGHES, Fondo Oficialidad Mayor, tomo 3064. The questionnaire included the following questions:
1) What employment did you have under Diaz, when were you named, and why did you quit? 2) What were your reasons for leaving? 3) During the political struggle under Diaz, which side did you associate with and how did you participate? 4) What part did you play in the struggle during 1909-1910? Were you a civil or a military participant working for the revolution? Specify concrete actions. 5) What functions did you fulfil under Madero, elected or appointed? 6) How long did you serve, and why did you leave? 7) In which political contest have you figured as a candidate for public office, and which elements aided you? 8} Were you involved as an armed citizen or as a civil element against Huerta; when did you commence and what did you do? 9} have you been an office holder in Sonora? Elected or appointed? 19) Why and when did you leave your above position? 11) What part did you play in the conflict between Calles and Maytorena beginning in 1914 when the military was in Hermosillo trying to combat Maytorena' s treason? 12) Why did you remain in territory occupied by the villista-maytorenistas when Calles evacuated Hermosillo to concentrate in the north, beginning also in 1914? 13) What attitude did you assume toward the Convention's rebellion against Carranza? Mention clearly and precisely your actions. 14) Were you employed under that conventionalist regime or were you on the side of Carranza? Cite dates and happenings. 15) Did you serve the constitucionalistas beginning February, 1913? If yes, how, when and where? 16) Have you left your posts in the constitucionalista government? If yes, why? 17) Have you documents to affirm your acts?.