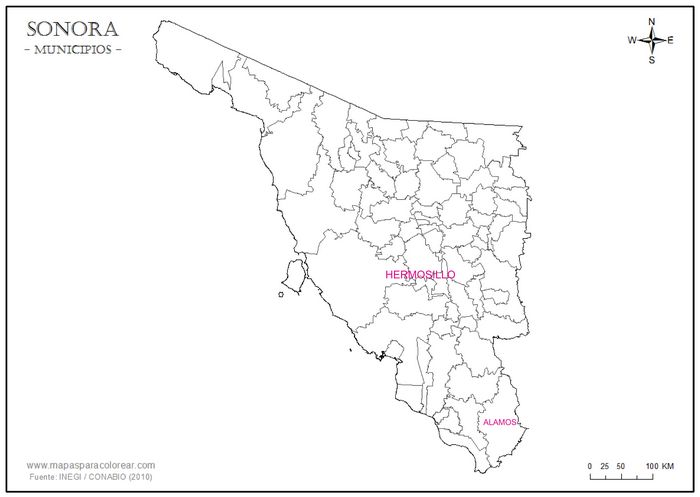 Examples of scrip used by companies from Sonora to pay their employees are rare. First, no one had any incentive to leave scrip behind: the employees would not regard it as a store of value for any time longer than the period between paydays, whilst employers, to whom scrip was an outstanding obligation, would redeem it first if they liquidated, merged, or closed down their operations. In addition, everyone was aware of its questionable legalityAmong other dispositions payment by means of tokens was prohibited by presidential decrees of 30 November 1889 and 25 March 1905.

Though free labour existed in the north of Mexico, on Sonoran haciendas and ranchos the predominant form of labour remained debt peonage. To ensure employment and a suitable dwelling and to acquire goods, many Sonorans, with no physical coercion, willingly offered themselves as peones and became indebted. Most labourers, Mexican or Yaqui, received payment in kind: one observer commented that remuneration for labourers consisted of ‘goods and food like sugar, beef, liquor, cloth, or whatever else the foreman wishes’Cyprien Cornbier, Voyage au Golfe de California, Paris, 1864. To ensure the indebtedness of the peones, the owner charged as much as three times the original value of most goodsJohn Denton Hall, Travels and Adventures in Sonora; containing a Description of Its Mining and Agricultural Resources and Narrative of a Residence of Fifteen Years, Chicago, 1881, so the people seldom managed to pay off their original debts, and the operators could be assured of a relatively stable labour force.

In larger cattle- or wheat-producing enterprises, where hacendados regularly needed labour, this relationship proved advantageous to both groups. The landowners acquired a dependable work force, and the labourers, shelter and basic goods. After several generations, some hacendado-labourer relations acquired a degree of familiarity and mutual trust, decreasing the use of coercion. Wealthy hacendados and merchants, such as the Camou family, maintained a permanent number of indebted peones. On outlying smaller ranches, where labour remained scarce, coercion became the rule, especially where indigenous labour was involved. In the northern countryside of Altar and Arizpe, ranchers resorted to brutality to maintain a stable labour force and hunted down escaping workers like runaway slaves.

In 1883 the Sonoran state legislature limited debt to the equivalent of six months labour. Labourers now had the opportunity to seek employment on the American side of the border or in large foreign-owned mining enterprises within Sonora, and formal peonage gradually lost ground, though it continued into the early decades of the twentieth century.

Angel Almada was of a new generation of businessmen in AlamosAlamos was a colonial bastion, with a strong merchant class, hacendados with large land holdings, and old and distinguished families but it suffered from the decline in mining and by 1910 had actually lost population, to the unhappiness of its merchants. Many former residents left for Navojoa, Echojoa, and Huatabango, all thriving agricultural towns. The inhabitants blamed Alamos’ decline on Corral and his henchmen and eventually joined the ranks of the rebels.. He married Josefa Urrea, heiress to one of Alamos’ major families with interests in mining, agriculture and commerce. On 17 July 1887 he formed the firm, Angel Almada y Cía, with an initial capital of $10,418. Its personnel included Jesús A. Almada as limited partner (socio comanditario), Angel Almada as managing partner (socio administrador), and Ignacio E. Almada and Jesús G. Almada as employeesANES, protocol notarial, 26 October 1889. The company was registered as a general merchant and operator of a warehouse and tobacco store in 1888AAA, caja 1, exp.10. By 1893 it had increased its capital to $50,000 and Angel was the leading businessman in the regionAHES, tomo 647 and one of the richest merchants in the townAngel Almada had massive savings (abultados ahorros) according to the Lista Nominal de los Vecinos Principales de Alamos 1892 (AGHES, carpeton 647). 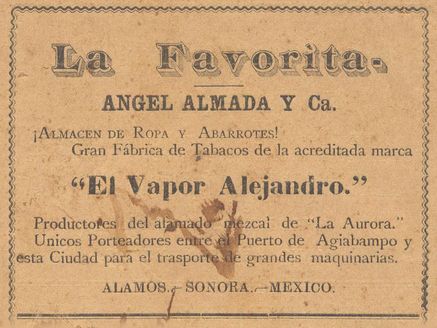 Angel was involved in local politics from the 1870s until the turn of the century.