The concession for a bank in Tabasco was granted to G. Benito y Compañía, Búlnes y Compañía and Policarpo Valenzuela on 29 August 1900. The Banco de Tabasco was founded on 29 September in the city of San Juan Bautista (Villahermosa) with a capital of $1,000,000 and began operations on 1 January 1901. At the turn of the century the population of the entire state was only about 150,000 and the chief economic activities were ranching, logging and dye manufacture: the currency requirement of such an area were not large but this bank profited from the fact that the federal government granted generous concessions to the first bank of issue to be founded in each state.

The bank sought permission to open a branch in Pichucalco, in the neighbouring state of Chiapas, on the grounds that that area had closer ties to Tabasco than to Tuxtla Gutierrez and the rest of the state. The branch finally opened on 23 August 1904Memorias de las Instituciones de Crédito correspondientes á los años de 1904-1906, tomo III.

The ABNC engraved special vignettes of the coat of arms of Tabasco (C 764), a portrait of Doña MarinaDoña Marina, more commonly known as La Malinche or Malintzin was a Nahua woman who played a key role in the Spanish conquest of the Aztec Empire, acting as an interpreter, advisor and intermediary for the Spanish conquistador, Hernán Cortés. She was one of 20 women slaves given to the Spaniards by the natives of Tabasco in 1519. Later, she gave birth to Cortés's first son, Martín, who is considered one of the first mestizos (people of mixed European and indigenous American ancestry). (C 763) for the $5 note, a view of the Government Palace (C 767) for the $10 note, and a view of the waterfront of San Juan Bautista (Villahermosa) (C 678) for all the backs. 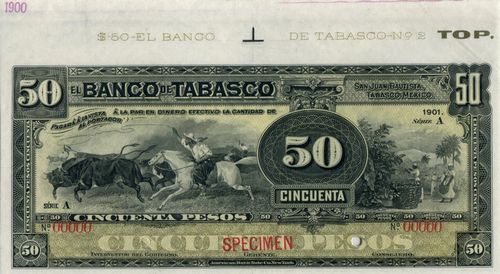 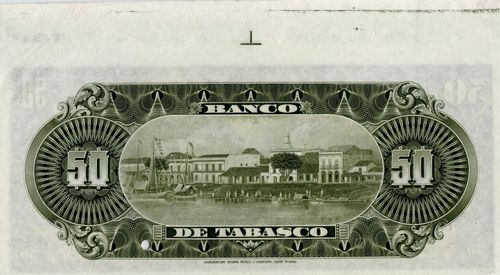 Authorisation for $1 and $2 notes

Following Huerta’s changes to the Ley general de Instituciones de Crédito the bank was given permission to issue $1 and $2 notes[text needed]El Pueblo, 5 April 1918. However, it is unknown how far it advanced this proposal. Certainly, no proofs are known and they might never have existed.