Obviously by early 1914 there was a scarcity of low values coins in Tabasco so the local Chamber of Commerce issued 20c and 50c notes dated 15 April 1914. 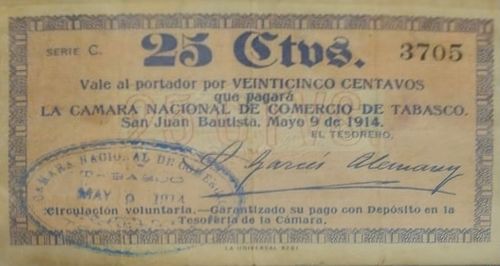 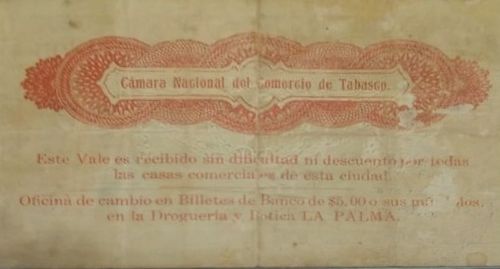 The 20c and 50c are well designed notes with a variety of motifs including a vignette of the state coat-of-arms, a background of micro-lettering, a red seal of the TESORERIA Y ADMON. GRAL. DE RENTAS DEL ESTADO – TABASCO and a statement that they were of voluntary circulation and guaranteed by a deposit in the Chamber’s treasury. On the reverse it stated that the vale would be accepted without difficulty or discount by all the casas comerciales and that an office to exchanged the notes for banknotes in multiples of five pesos had been established in the Drogueria y Botica “La Palma”. The 25c note is of a simpler design, and has the imprint of the printers, La Universal.

They had the printed signatures of Juan Ripoll as Presidente, Simón Garcés Alemany as Tesorero and Eligio N. Granados as Secretario.

Presumably these were issued during Huerta’s time, but they were later reused when the revolutionaries had taken over the capital. Notes are known with a red overprint on the reverse ’EJERCITO CONSTITUCIONALISTA / TABASCO / GOBIERNO PROVISIONAL / San Juan Bautista, Diciembre 31 de 1914’ and the printed signatures of Carlos Greene Ramírez as Gobernador, Rodolfo Moguel as Tesorero General, and Fernando Aguirre Colorado as Secretario General.

On 29 March 1915 because of the absolute necessity for small change Carranza authorised the government of Tabasco, to authorise in turn the Comercio of the state to issue fractional currency, as long as it was in denominations of 5c, 10c, 20c and 50c, and the issuers had deposited a similar amount in the Tesorería General as a deposit.

So in May 1915 the Carrancista government in listing the different types of paper currency in circulation included as ‘Papel moneda de circulación legal’ the fractional currency that the Comercio of the states of Guerrero, Chiapas, Tamaulipas, Puebla, Hidalgo and Tabasco, had issued with the authorization of the local government, in virtue of the authorization conceded by the Secretaría de Hacienda on 29 March 1915Periódico Oficial, Puebla, Tomo XCVI, Núm. 13, 18 May 1915: Periódico Oficial, Chiapas, 29 May 1915.