By 1863 the French had invaded Mexico, a Regency Council had been established to rule until the arrival of the Emperor, Maximilian, and adherents of the former President, Benito Juárez, had risen arms in various parts of Mexico. In Tabasco the Liberal Army of Tabasco (Ejército Liberal Tabasqueño) had defeated the French at the battle of El Jahuactal on 1 November 1863 and since December had besieged the capital San Juan Bautista (now Villahermosa) where the French troops, under governor General Eduardo González Arévalo, were entrenched. Arévalo had created a minor fortress out of the Casa de Gobierno, the building called the Principal, and the city blocks that immediately surrounded them. Heavily fortified breastworks lined the streets, while windows were boarded up or else modified for marksmen.

The Regency nominated General Manuel Díaz de la Vega to replace Arévalo and he sailed for San Juan Bautista by the only route open to the French, the river Grivalja. Guerrillas harassed him along the way, but his boat, the Conservadora, managed to disperse them with deadly discharges of scrap metal fired from a cannon. Díaz de la Vega arrived on 18 January, uninjured but facing a nearly impossible situation. To begin with, Arévalo was smouldering over his loss of command and by the time Díaz reached the plaza of San Juan Bautista he discovered that the small resistance army led by Gregório Méndez had grown considerably.

The US consul, James Mansfield, reported: Ingress or egress from the place is now a matter of impossibility. Cruel reprisals are made on both sides and the state of the city or rather that part of it in the possession of the imperialists can hardly be worse as leaving one side the danger of the shot and shell which are continually flying in all directions, there is a complete dearth of the common necessaries of life. For instance, bread is sold at a rate which is equivalent to a price of $200 per bbl. for flour and everything else in the same ratio. Private individuals considering themselves fortunate when they obtain any even at these costs.

Díaz de la Vega immediately imposed martial law, decreeing the death penalty for anyone who stole as much as a single peso. Arévalo had already imposed forced loans to pay for his defence and Díaz now demanded a forced loan of $12,000 from the major merchants and property owners. Tabasco was not a wealthy state and these extortions cost the imperialists their last remaining support. Díaz also appointed José Julián Dueñas (who had been assessed at $1,000) along with Juan Ruiz and José Sánchez Roca as a "reconciliation commission" to treat with the rebels but these measures had little effect. Resistance leaders answered by assassinating two Spanish and two Mexican collaborators, and almost killed the commissioners themselves.

The imperialists controlled almost nothing except the Principal, which lay a short distance from the Grijalva's west bank. Ensconced in redoubts throughout the town, the enemy pelted the Casa de Gobierno with a fierce if undisciplined fire. Under these bleak circumstances interventionists could muster the strength for one more offensive measure. On 2 February Díaz threw a column against the republicans fortified in the Iglesia de la Concepción, not far from the Casa de Gobierno. The engagement quickly degenerated into gruesome hand-to-hand combat of machetes against bayonets, and while the latter was decidedly the superior weapon, the republicans' superior numbers eventually forced a withdrawal.

Díaz managed to fortify his position with additional soldiers and two cannons from Veracruz but, unfortunately, one of the two weapons' carriage broke apart in the first fifteen minutes of firing.

On 11 February the resistance fighters staged a frenzied raid on the Principal and at last succeeded in hacking open some of the doors. Once inside, they discovered that the interventionists had covered the floors with nail-studded boards, points upward, to check the invaders' mobility. But this primitive obstacle was easily circumvented by tossing down an improvised gangway. Moreover, a simultaneous attack on the cavalry's headquarters ultimately settled the battle in republican favour. With the fall of the Principal, the rebels also came into control of a modest supply of arms and several crates of ammunition.

The situation was now clearly out of reach. Arrival of some fifty to sixty dejected interventionists from Chiapas simply compounded the hardship. Díaz received orders from French contra-admiral Bosse to evacuate all troops and material from San Juan Bautista; without their support further occupation was impossible, and 28 February Díaz organised a general retreat to Frontera. The battle for San Juan Bautista had lasted exactly forty-five days, from 14 January to 27 February, and the republicans had recovered the state even before Maximilian arrived in Mexico..

Not surprisingly, given the circumstances, these have a very simple design with the legend 'Papel moneda. / VALE UN PESO' inside a frame, and were personalised with a signature, handstamp(s) and occasionally a number. 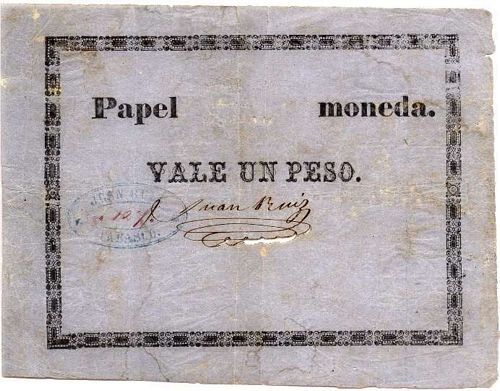 with handstamp of JUAN RUIZ - TABASCO and signature of Juan Ruiz 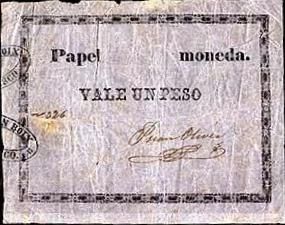 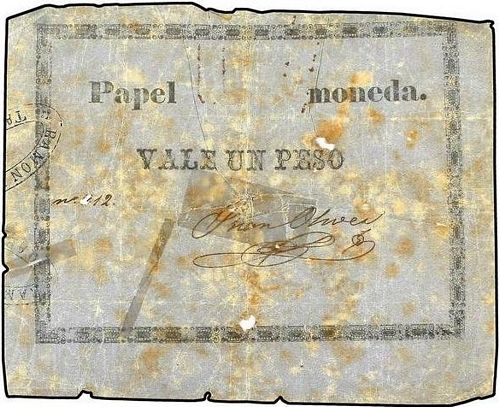 with a handstamp "RAMON BOIX – TABASCO." and signature of Juan Oliver. 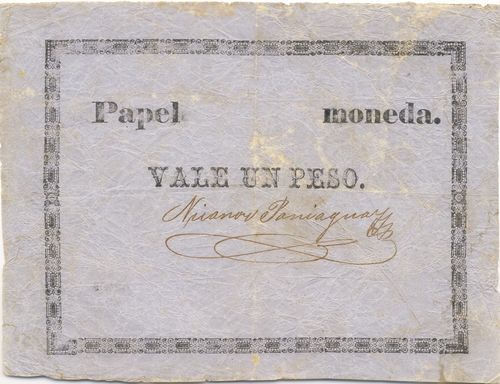 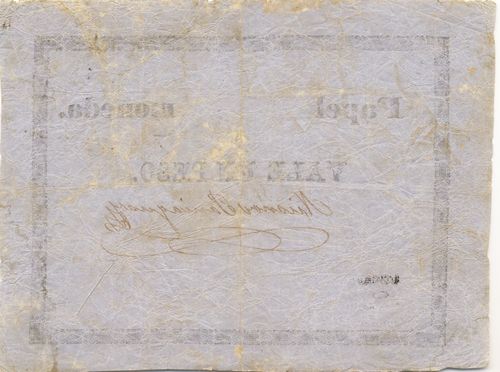 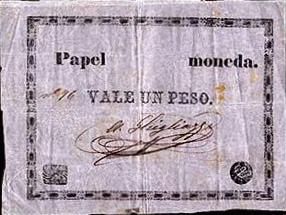 with a square stamp, a round "A.G." and signature of Angel Ghigliazza. 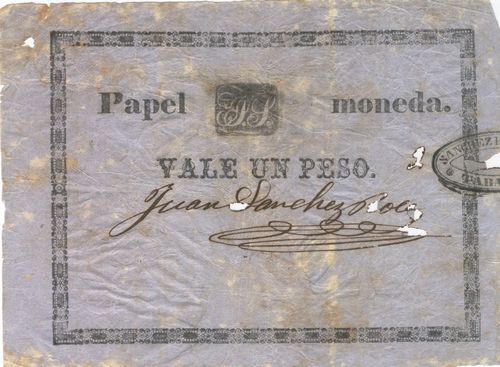 with a handstamp "SANCHEZ HERMANOS  - TABASCO." and signature of Juan Sánchez Roca. 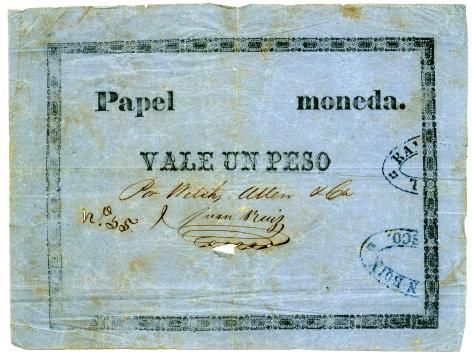 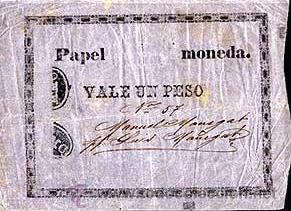 There is a reference to Díaz decreeing the circulation of $2,104 in promissory notes, which the city merchants were forced to acceptAHSDN, D/481.4/9536, 19 February 1864, f. 274, which might indicate the total value of this 'papel moneda' issued.

Again, given the circumstances, we can presume that these were short-lived and probably not redeemed.