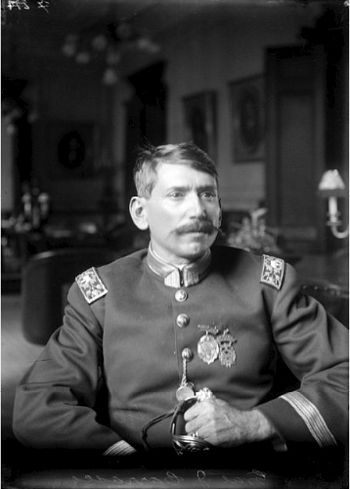 General Juan Carrasco was born on 24 June 1878, at La Puerta de Canoas, Sinaloa. and spent his early years at the El Potrero ranch and was involved in the sale of lime and materials for construction. At the age of 32 he joined the revolutionary movement, in the forces of General Justo Tirado. After Madero’s triumph he retired to his ranch, but in the wake of Huerta’s coup d'état, again took up arms, leading a group of around 600 men and attacking the lines of communication. When the Cuerpo del Ejército del Noroeste moved south he came under the command of General Ramón F. Iturbe in Culiacán and took Mazatlán on 9 August. On 1 November 1915 Carranza confirmed his rank of Brigadier General.

In 1919, Carrasco applied for permission from the Secretary of War to withdraw from the army and accept the candidacy for governor of the state. A supporter of Carranza, at the fall of the latter he abandoned his campaign. In 1922, he distanced himself from Angel Flores and on 24 June disowned Alvaro Obregón. On 8 November 1922, while he was moving to the state of Durango to join forces with those of General Murguía, he was attacked at El Guamuchilar (on the borders of Durango and Nayarit), where he lost his life. 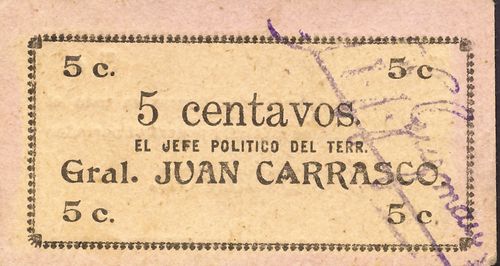 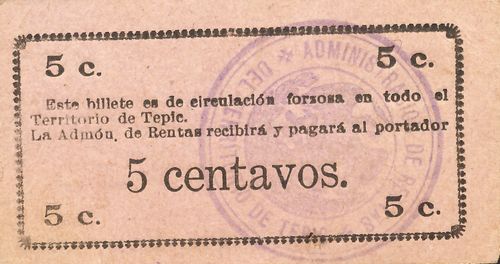 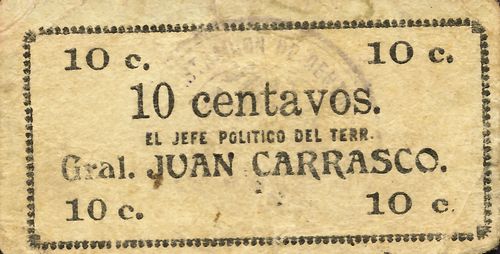 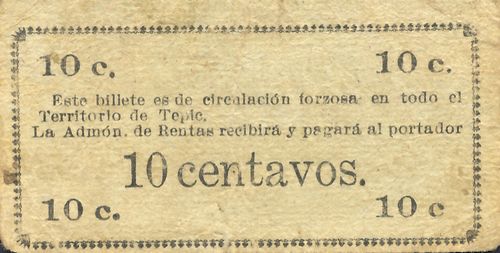 Ernesto Damy Campaña was born in San Lorenzo, Sinaloa, in 1892. He joined the movement led by Francisco I. Madero and on 23 February 1913, attended a political rally in Mazatlán to protest the murders of Madero and Pino Suárez, for which he was arrested. The same year he was discharged from the army. and joined the forces commanded by Brigadier General Juan Carrasco, head of military operations in the state. He was made a lieutenant in 1913, major in 1914 and Brigadier General in 1915. On 21 February 1918 he was appointed deputy chief of the Cavalry Department and took charge of the Benito Juárez Brigade in Tuxtepec, Oaxaca. He died in Tierra Blanca, Veracruz., on 17 May 1919, as a result of a wound he received when the train traveling to Rio Blanco was attacked.

On 16 October 1914 it was reported that the notes issued by the Jefatura Política in Tepic would be withdrawn from circulationBoletín Militar, Tomo II, Núm. 79, 16 October 1914.