Rafael Buelna was an exception to the normal run of revolutionary leader, in his upbringing, intelligence and age. In June 1913 he was named chief of the Revolution in the south of Sinaloa and the territory of Tepic and dedicated himself to harassing the federal forces in that area. On 16 October 1913 his forces took Rosario, throwing out the Huertista forces that held the city, and because of the lack of funds, he issued his own paper money in denominations of 10c, 20c and 50c and $1, $5 and $20 (so there was probably also a $10 note). 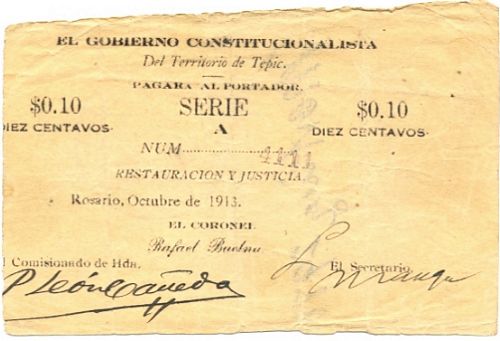 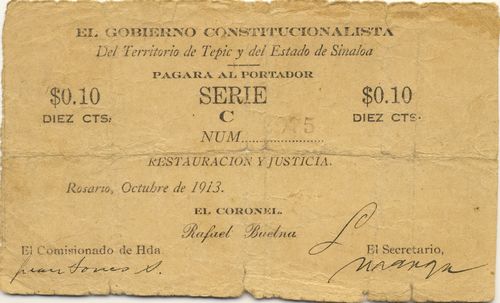 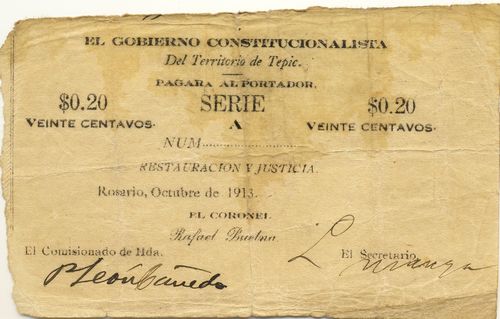 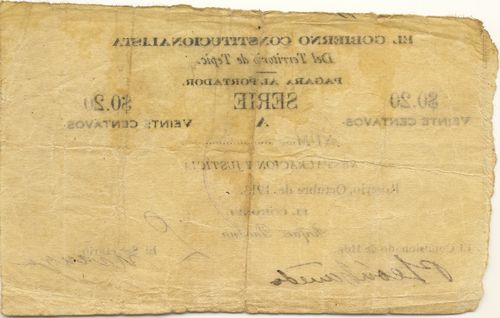 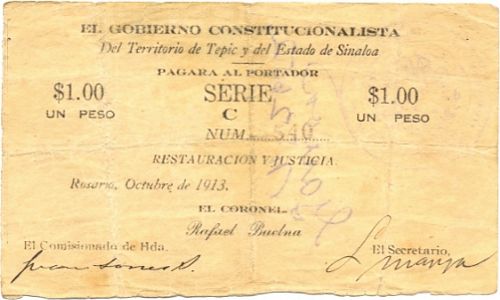 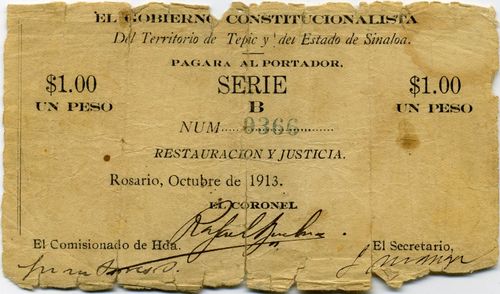 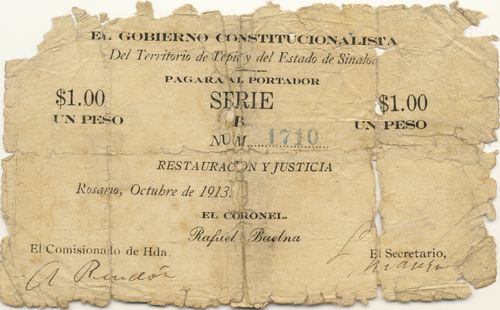 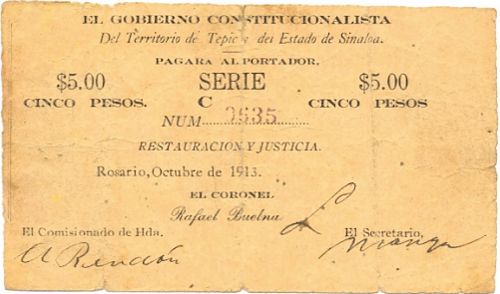 Series A were of 'Del Territorio de Tepic' while later series were of 'Del Territorio de Tepic y del Estado de Sinaloa', either because Buelna extended his command or because questions arose about the legality of the notes within Sinaloa. In addition to Buelna’s printed signature these notes carry the signatures of either Juan Jones S., P. León Cañedo or A. Rendón as Comisionado de Hacienda and L. Manga as Secretario.

On 28 February 1914 in his decree no. 21, Carranza made the paper money issued by the Constitutionalist governments in the states of Sonora, Chihuahua, Sinaloa, Durango, Nuevo León and Tamaulipas, with his authorisation or approval, obligatory throughout the territory dominated by Constitutionalist forces but these primitive productions are unlikely to have travelled far and were probably not included. On 2 April Carranza, from Ciudad Juárez, wrote to Buelna, at the time visting Nogales, Sonora, in reply to a letter of 21 March, that as the new Constitutionalist notes were expected in a few days, he did not believe that Buelna needed to issue paper money in Tepic, since, as soon as the new issue arrived, he would let Buelna have enough money for his expensesAIF, RM/V 1-015.

However, in January 1915 Carranza’s Secretaría de Hacienda again listed these notes amongst the Constitutionalist issues that had to be accepted in any form of payment as being of forced circulationEl Correo de México, 21 January 1915; El Sol, Núm. 159, 22 January 1915; AQ, Fondo Poder Ejecutivo Sec 2ª Hacienda C-1 Año 1915 Exp. 144.

The wily Obregón sought to limit Villa’s power but left Tepic out of his own plans to control Jalisco, effectively leaving Buelna as governor of what would, in 1917, become the state of Nayarit. After the Convention at Aguascalientes Buelna decided to support Villa and was nominated Comandante Militar of northern Jalisco, Tepic and the south of Sinaloa. In 1915 he authorised an issue of low-value notes (10c, 20c, 50c and $1) that carried the legend that they would be redeemed upon presentation in the Administración de Rentas of the territory. 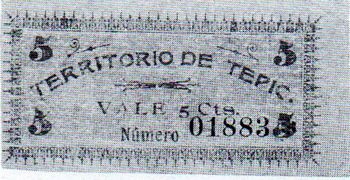 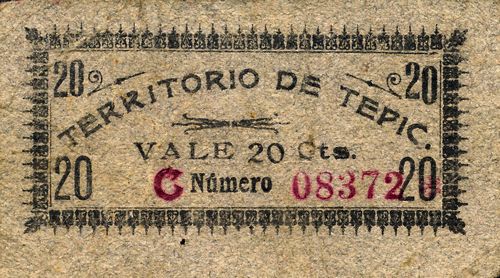 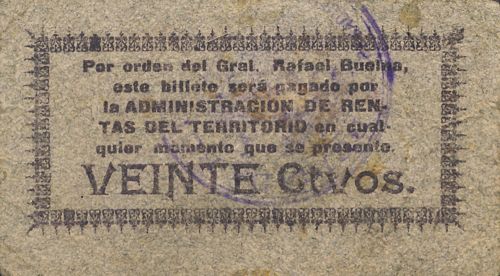 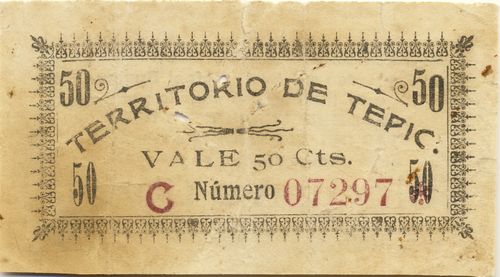 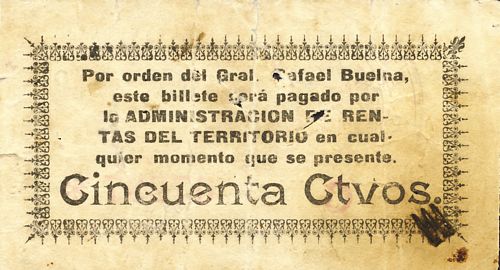 The one peso note is dated 27 July 1915 and carries the signature of Juan de Dios Bátiz as the Coronel Chief of Staff (El Coronel Jefe del Estado Mayor) as well as the printed name of Buelna, as Jefe de la C. [Columna or Cuerpo?]

There is another type of 50c note known, though it might be a more modern fantasy. 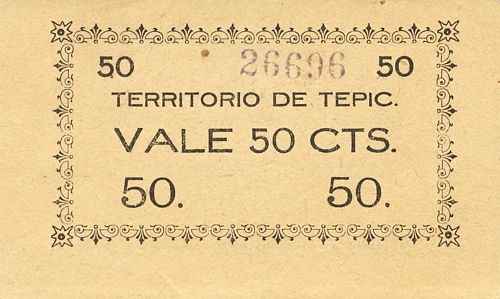 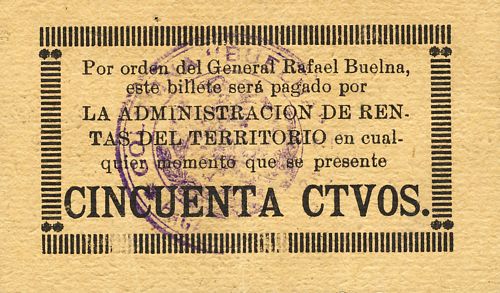 Finally, another issue also carries Buelna’s name. This is a military issue, of the Pagaduría General of the Columna de Occidente, and is datelined Acaponeta, 1 August 1915 and is signed by de Dios Bátiz as Coronel Chief of Staff.

All these issues are simply affairs, showing that, unlike Obregón or Diéguez, Buelna did not have access to sophisticated printing presses.