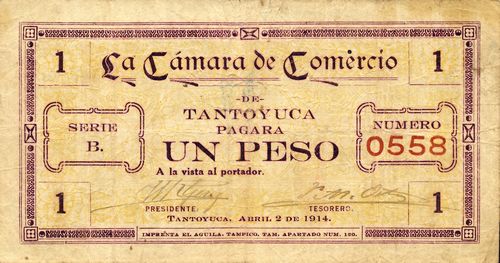 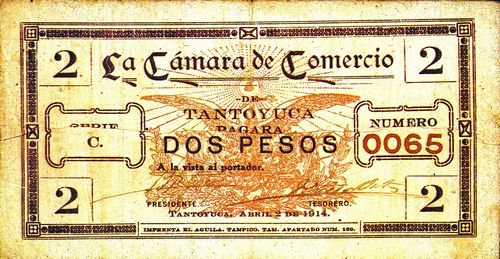 We know of one peso and two pesos notes issued by the Chamber of Commerce in Tantoyuca, which is located in the state's Huasteca Alta region, and the series letters suggest there was a 50c value. These notes, dated 2 April 1914, were printed by the Imprenta El Aguila, in Tampico, in the neighbouring state of Tamaulipas and signed by [                    ][identification needed] as Presidente and [           ] M. Ortíz[identifaction needed] as Tesorero.

This issue coincided with a supposed improvement in the government’s fortunes in the area around Tantoyuca. It had been overrun by rebels but Coronel Emilio Querol y Gómez had arrived as Jefe de las Armas, all the businessmen and hacendados had offered him them their moral and financial support in pacifying the Huasteca and this was expected in short orderEl Independiente, 2 April 1914. It did not turn out that way. Candido Aguilar occupied Tantoyuca in May 1914 and Carranza then named him Governor and Military Commander of the state.