On 19 January 1914, during Huerta’s regime, the Cámara Nacional de Comercio de Veracruz, through their president, Juan Gómez y Oreján, asked the Secretaría de Hacienda for permission to issue vales al portador for 10c, 20c and 50c, having deposited the same amount in a bankEl Diario, Año VIII, Núm. 2114, 20 January 1914; El Imparcial, 20 January 1914. However, after consideration, the Secretaría refused the request, arguing that it was against the law and would cause unnecessary alarmEl País, Año X, Núm. 4514, 21 January 1914. This report says the request was for vales of 10c, 15c and 25c; The Mexican Herald, 22 January 1914. In March or April 1914 the Cámara Nacional de Comercio was authorized to issue vales in values up to fifty centavos. They circulated widely but by late June had disappeared. It was not known why this had happened but thought that they might have been taken to local ranches by people who daily brought foodstuffs into the city for saleEl Dictamen, Año XVI, Núm. 1189, 17 June 1914.

On 16 June the Cámara met in an extraordinary session to finalise the details of the cheques that it was to issue the following week. The Americans had occupied Veracruz on 21 April and on 13 JuneEl Dictamen, Año XVI, Núm. 1195, 23 June 1914 the commander in charge, Brigadier General Frederick Funston, had given permission for $16,000, though this was felt to be not enough to address the lack of change. The Cámara agreed that the cheques, drawn on the Banco Mercantil de Veracruz, would be

Each business would deposit the value of the cheques it required in cash in the Banco Mercantil. Designs were approved and it was hoped that the notes would be in circulation in the next weekEl Dictamen, Año XVI, Núm. 1189, 17 June 1914. However, the Cámara held another extraordinary meeting the next week. Almost all the members of the Cámara signed an agreement to accept the notes without restriction. They examined various models presented by different printing houses and named a committee to study the details and decide on a printer. It was expected that printing, numbering and signing of the notes would take twelve of fifteen daysEl Dictamen, Año XVI, Núm. 1195, 23 June 1914.

The designs were presented to the military authorities and approved, and the printing house started work, expecting to deliver the notes before 10 July. However signing 30,000 notes (10,000 of each denomination) by hand would take time and they were not expected to be ready until 20 July. 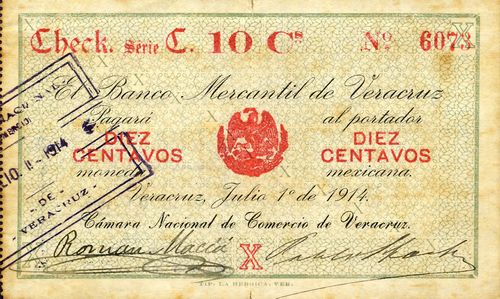 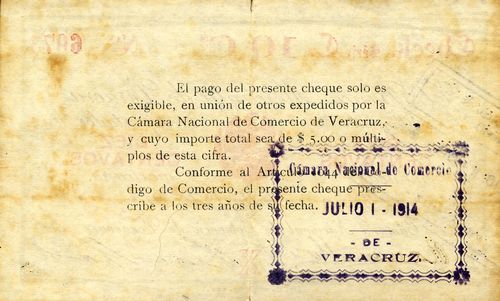 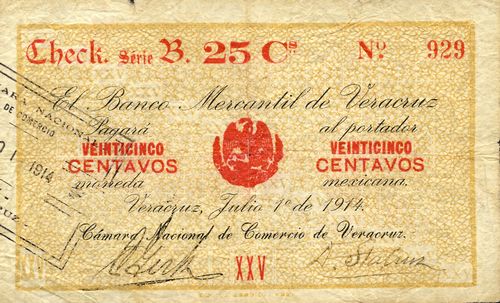 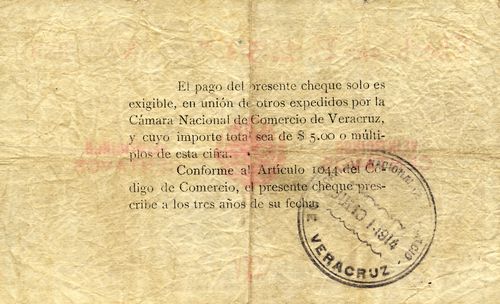 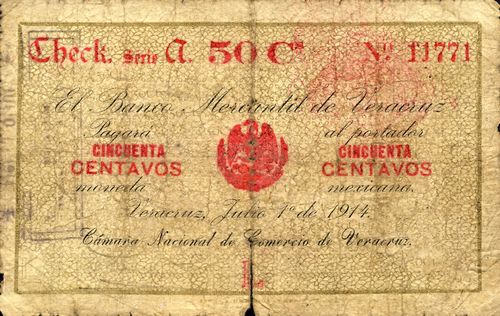 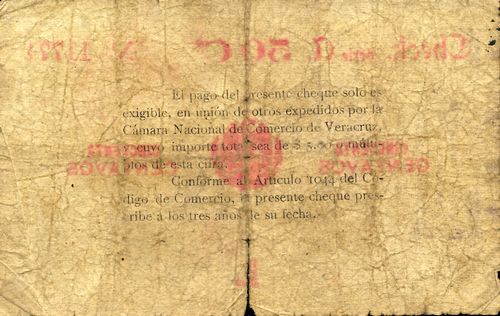 On 25 July the local newspaper printed the rules under which the Banco Mercantil agreed to pay the Cámara’s cheques.

On 15 August it was reported that despite the cheques for the past three days there had been an extreme lack of small change, without a satisfactory explanation of what had happened to the cheques . It was probable that the problem would be resolved once and for all by the government putting cartones into circulationEl Dictamen, Año XVI, Núm. 1245, 15 August 1914.