Manuel Peláez, independent military commander in the state of Veracruz

In 1911 Manuel Peláez, an influential oil broker and Municipal President of Alamo, Veracruz, was a supporter of Madero. However, when Madero’s politics set restrictions on foreign company operations and Madero was also unable to quell the banditry and social unrest, Peláez distanced himself and in October 1912 joined in a revolt of the conservative politician, Félix Díaz. The revolt failed and Peláez fled to the United States. When he returned to the Huasteca region (the coastal area roughly between Tampico, Tamaulipas, and the port of Veracruz) in April 1913 he found the area controlled by revolutionary bandits. The oil industry interests were endangered and Peláez started, with their financing, to organize private military forces. In June 1913 Peláez also requested assistance from the Huerta government’s War Department which commissioned him a Major in the Home Guard and gave him funds to arm a group of 500 men. Peláez campaigned against Carranza’s Constitutionalist Army but later in the year decided to take an independent direction, following neither Huerta nor Carranza.

The political climate in Mexico was constantly changing and the uncertainty made the oil community and the Veracruz ranch owners very nervous. Therefore Peláez maintained a small home army for the protection of the oil field operations financed by forced contributions. In 1914 when the Convention at Aguascalientes confirmed General Eulalio Gutiérrez as Interim President of Mexico, Peláez visited him in the Federal District and considered himself a supporter of the Conventionalist Army.

Peláez enjoyed the local population´s full support. He could deliver food and other supplies through his foreign oil industry partners in times when the rest of the population had difficulties in surviving. In January 1915 when President Carranza imposed federal taxes on the oil industry, Peláez started his rebellion calling himself “the General who opposes taxes on oil companies”. Between 1915 and 1920, Peláez and his forces held off several attempts by the Carranza government to control the Huasteca.

Paláez’ first issue was a 20c for the Brigada Paláez and four vales (25c, 50c, $1 and $5), for the Pagaduría General de la Brigada Paláez (General Paymaster of the Paláez Brigade), datelined from his general headquarters on 23 January 1915 referring to a military decree[text needed] of the same date. 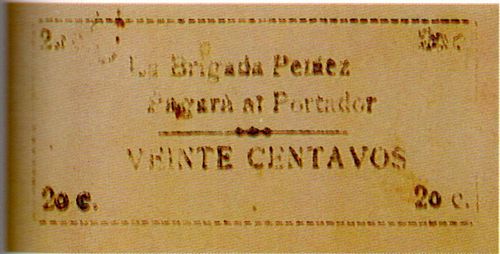 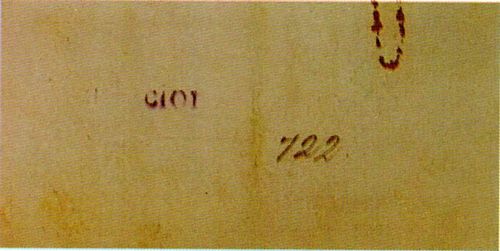 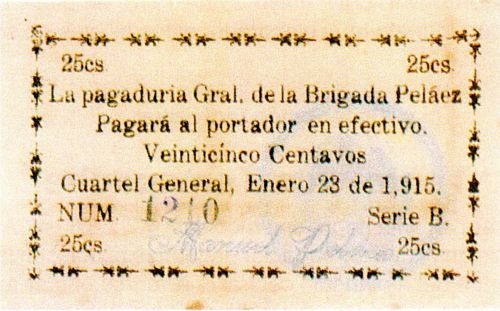 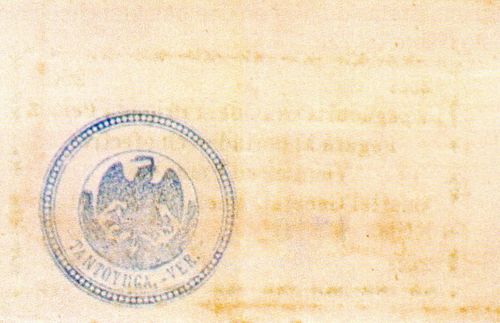 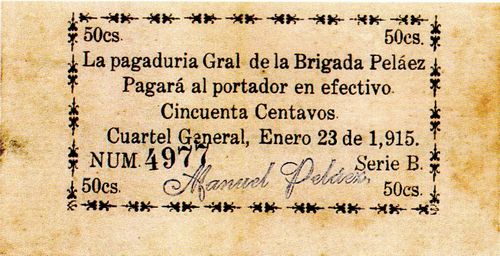 There were two different types of the $1 and $5 notes, the second Series B. 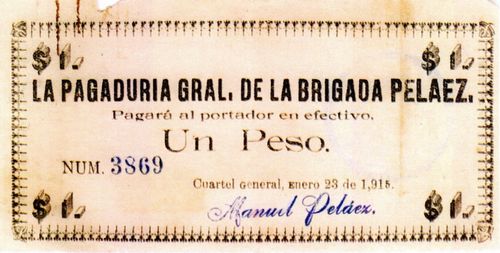 These notes were to be of obligatory circulation and acceptable by government offices in the payment of taxes.

This primitive issue was followed by a more professional one, from the general headquarters in Amatlán, dated 15 May 1915 and carrying the legend “EJERCITO CONVENCIONISTA – Jefatura de Operaciones en los Cantones del Norte del Estado de Veracruz (Conventionist Army – in charge of operations in the cantons in the north of Veracruz state)”. These stated that they would be exchanged by the Paymaster General for notes of the Gobierno Provisional (without specifying either the Mexico City or Veracruz issue, though given Peláez’ constant hatred of Carranza, presumably the former). 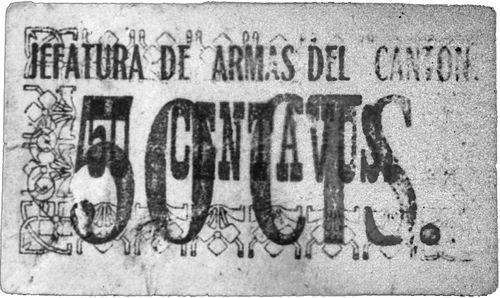 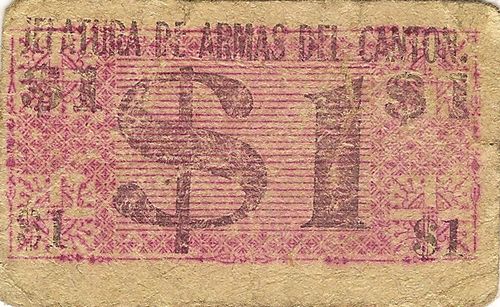 Peláez’ 3,000-strong well-trained army and commando soldiers kept the Carranza troops on the defensive. His commando group robbed trains in Veracruz and all the way to Puebla including territories controlled by the Zapatista Liberating Army of the South. In 1918-1919 Peláez even had negotiations with Zapata but no specific agreement resulted from their meeting other than both generals confirmed that Carranza was their mutual enemy.

When in April 1919 General Obregón started his revolt against Carranza, Peláez supported Obregón. On 21 May 1920, whilst attempting to flee to Veracruz, Carranza was killed by one of Paláez’ subordinates at Tlaxcalatongo. Obregón rewarded Peláez by confirming his military rank of General and appointed him commander of the military operations in the Huasteca region. Peláez was now an established and trusted military commander of the Federal Government but at the same time he lost his independence as the private oil industry protector and an army owner.

Peláez fell out of favor with the Obregón government, and so he moved to Los Angeles in April 1921. His lieutenants attempted to renew hostilities but they proved no match for the central government and were all disarmed by the end of 1921.

Peláez returned to Mexico in 1923 with intentions of joining the Adolfo de la Huerta rebellion, but he was arrested before he could participate. A few months after the rebellion was crushed, he was released and retired to his Tierra Amarilla ranch, where he lived peacefully until his death in 1959.