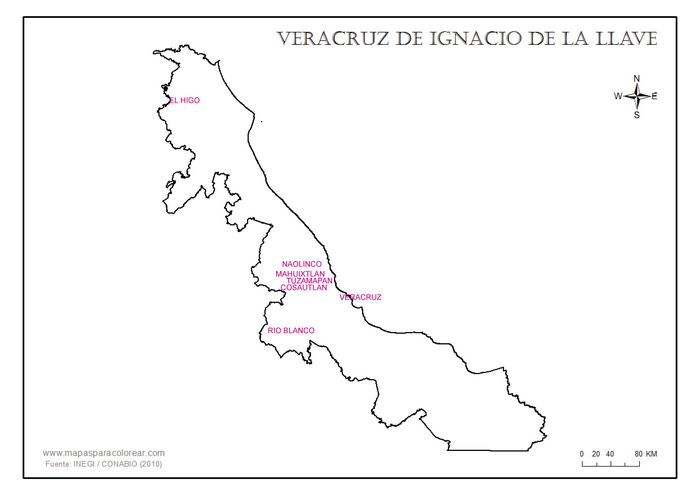 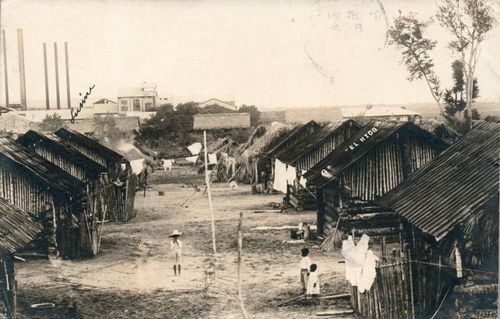 The Compañía Azucarera del Pánuco, S. A. was founded in 1898 by a group of Frenchmen, including Julio M. Limantour and Hugo Scherer, Jr.AHAGN, Notary 62 and 543, Agustín Pérez de Lara, 24 September 1906 It established a sugar hacienda at El Higo, in the north of the state, under the management of Federico Proal, which exported all of its production.

Because of the shortage of coins in the area, including the major port of Tampico, the company already used metal tokens in its tienda and brought in 1c coins from Mexico City, and we have a $5 vale dated 5 May 1915. 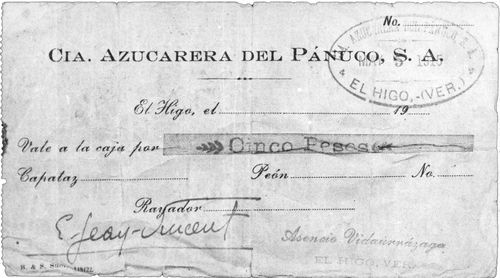 Huayacocotla is a town in the Huasteca Baja region. 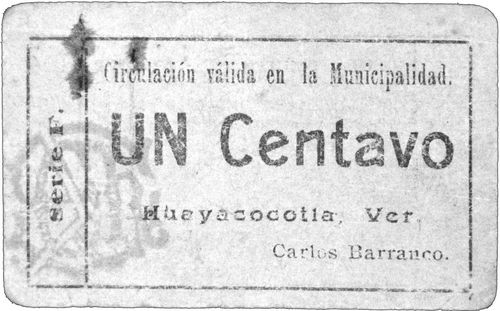 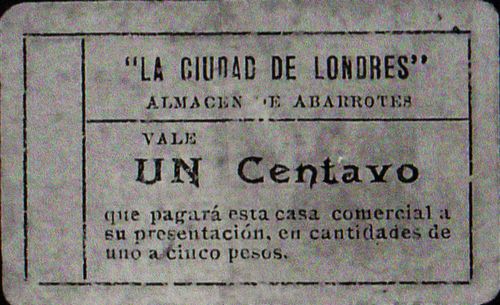 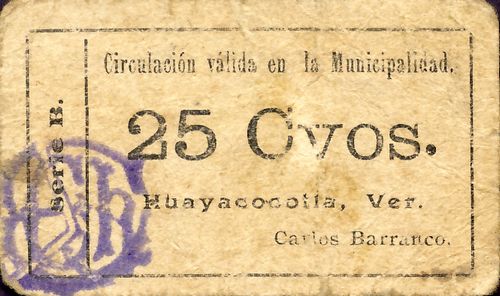 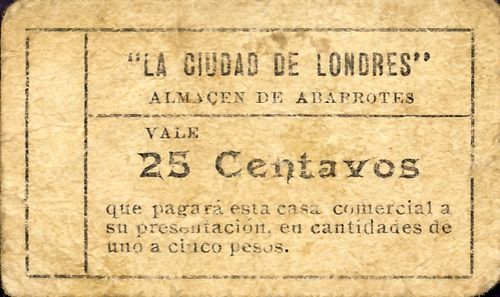 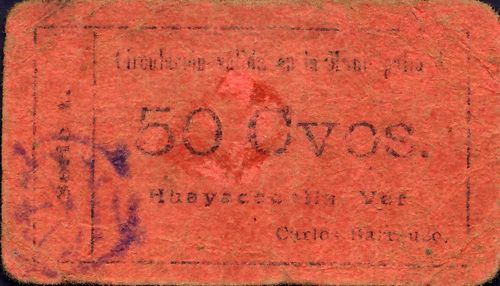 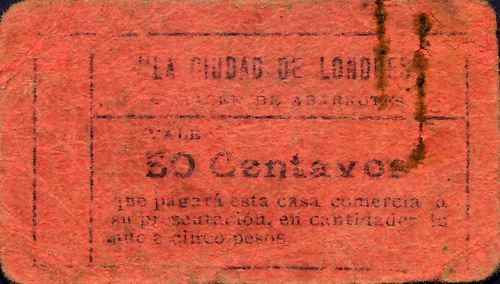 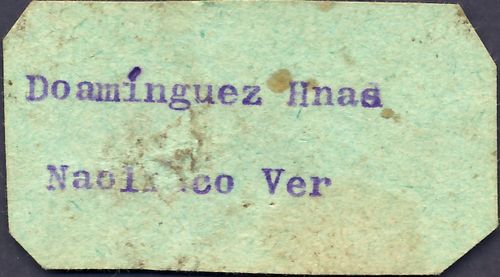 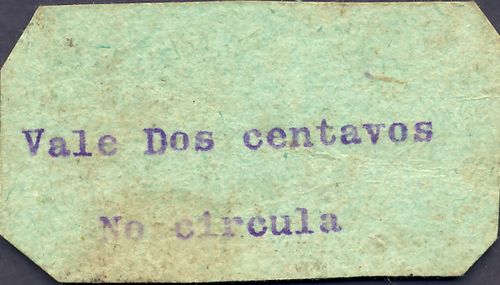 A typewritten 2c note. The text ‘no circula’ shows that it was for internal use.

Mahuixtlán is 19 kilometres south of Xalapa. 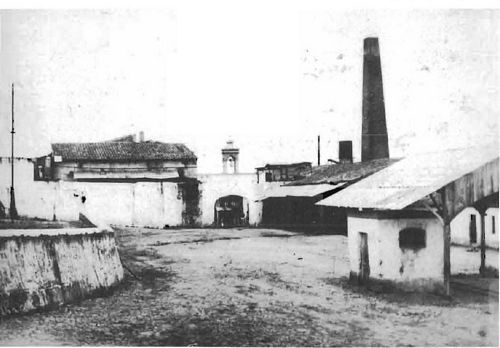 The politician and businessmen Eduardo Dondé owned this hacienda: in 1880 he installed a still to produce aguardiente de caña, and in 1907 and 1910 a waterwheel to drive it. So the Francisco Hernández who issued a note for 50c, dated 22 August 1914, might have been the leasee or overseer or run a local tienda. 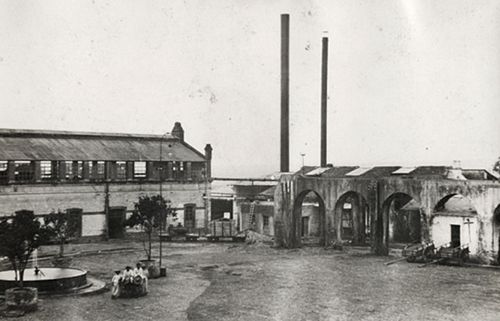 Tuzampapam is 14 kilometres east of Coatepec. The hacienda of Tuzamapam was founded in the eighteenth century under the name of San Juan Bautista, with the Gorozpe family as the first owners. Over time it became the largest ingenio in the region. During the nineteenth century most of the land was used for cattle breeding with sugar cane grown on 960 hectares of irrigated land, and some coffee plantations.

Around 1907, Luis Gorospe, son of the owner, began the installation of a mill, turning Tuzamapam into a sugar plantation. The construction lasted almost ten years and involved the construction of stone roads, railway tracks, bridges and irrigation canals, aqueducts, the construction of the main house and factory building and the transfer and installation of imported machinery. The area used for the cultivation of sugarcane increased, leading to an increase in the demand for labour. Between 1900 and 1920, the hacienda had about 250 workers in the field.

Cosautlán is a town in the central mountainous area of Veracruz, about 25 kilometres south of Xalapa. 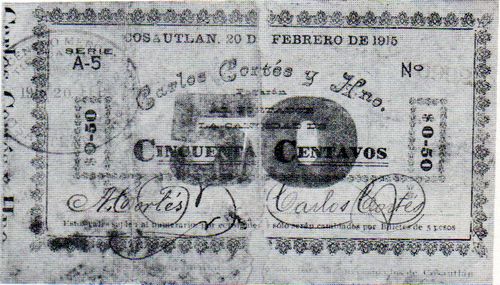 This chemist's, owned by José de J. Rincón, issued a 50c note, dated 1 March 1915. The legend reads 'Este Vale es provisional y sólo para facilitar las operaciones de la casa que los expide' so these were, expressly at least, only for use within the store and would have been a response to the lack of small change. 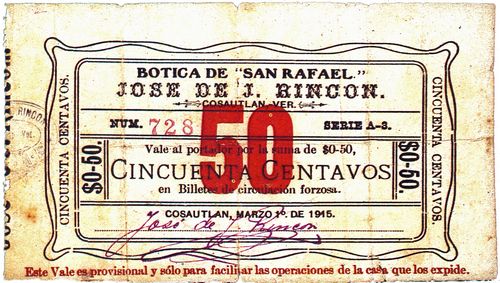 They are signed by José de J. Rincón.

After the Americans withdrew their forces a new Junta de Administración Civil was established on 24 November 1914. At one of its first sessions, on 1 December, the Inspector de Policía, Teodoro Frezieres, reported that some casas comerciales had issued cardboard vales (cartones-moneda) without any legal authorisation. He was ordered to collect in the paper money and consign the offenders to the authorities. He was also told to use the press to inform the public that such issues were prohibitedAHV, Actas del Cabildo (Junta de Administración Civil), libro 91, p14 so the next day he published a notice, warning stores that had made issues of moneda fiduciaria, in contravention of the Secretaría de Hacienda y Crédito Público, that they would be referred to the authorities for punishmentEl Dictamen, Año XVI, Núm. 1350, 4 December 1914.

Llaxa was one of the merchants who issued cartones, in his case for one and two centavos. On 23 December 1914 his lawyer, Manuel Lozada y Prado, asked the Junta de Administración Civil to return $48 that the police has confiscated. The Junta agreed to return the money, in Constitutionalist notes, and refer Llaxa to the Presidente of the Junta for judgementAHV, Actas del Cabildo (Junta de Administración Civil), libro 91, p50. 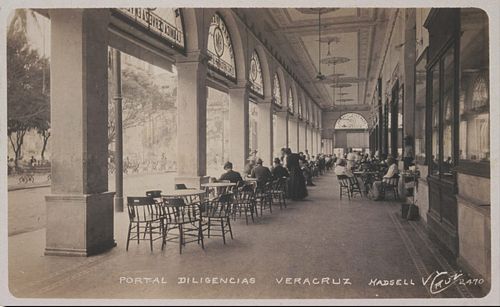 The Hotel Diligencias of Diáz, Menendez y Compañía faced the main square (and still does). 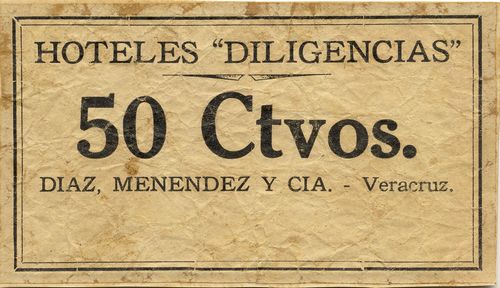 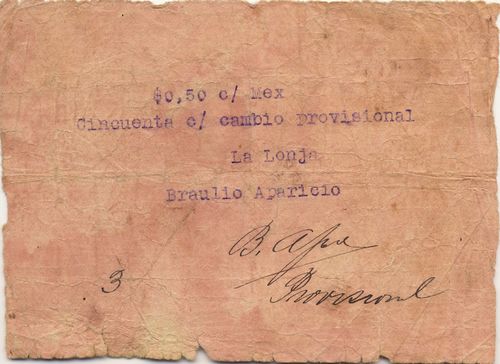 This simple typewritten note for 50c is catalogued as from Mexico City but is in fact Veracruz. Braulio Aparicio advertised his restauant in The Mexican Herald from May to September 1914.

The catalogues list a ticket from this tram company but, as elsewhere, we need further documentary evidence before we can agree that these were used as paper currency. 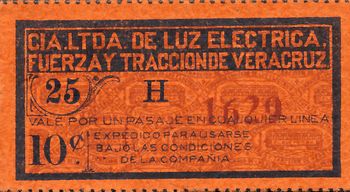 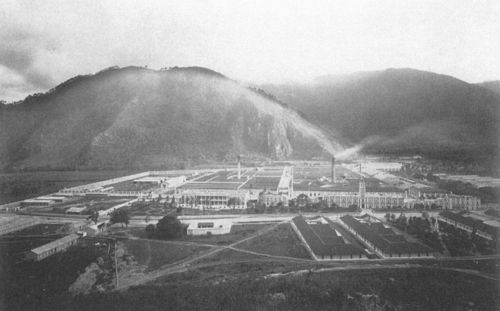 La Compañía Industrial de Orizaba S.A. operated four textile factories in the Orizaba valley, including one at Rio Blanco, the largest textile mill in the country. 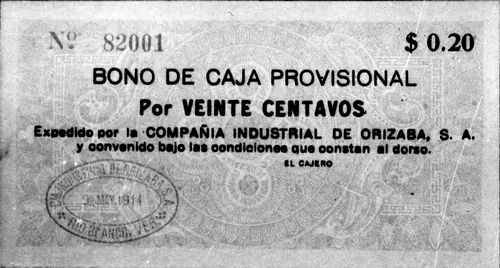