De los Santos fled Yucatán, taking the contents of the state treasury with him for safekeeping and since Argumedo needed resources to buy weapons and munitions, on 26 February, in his decree núm. 3, he authorized the issue of 17 million pesos in Comisión Reguladora notes.

By threatening not to deliver on 100,000 henequen bales already under contract to the International Harvester Company’s agent Avelino Montes, he forced Montes’ representative, Michael J. Smith, to extend him a ‘loan’ of $500,000 U.S. for the purpose of buying arms and munitions in New York. Smith provided a letter of credit for $480,000, a cheque for $19,000 and $1,000 in Mexican gold currency and in return Argumedo directed the Treasury to reimburse Montes with $3,550,000 in Series C and D notes. Between 13 and 15 March Montes provided payments of $180,000 and $24,250 US against the letter of credit but then refused to pay the balance as Carranza was already taking steps to remove Argumedo, sending one of his best general, Salvador Alvarado, to Yucatán. By 17 March Argumedo had fled, and on 19 March Alvarado assumed the governorship. On 20 March in his decree núm. 3 Alvarado nullified Argumedo’s order authorizing the C and D Series and declared the notes invalid and on 25 March in his decree núm. 7 he added that the C and D notes should be surrendered for destruction within thirty days. After that date they would be considered counterfeit and anyone possessing or using them would be liable to execution as a counterfeiter.

Montes appears to have paid $201,020 towards the 100,000 bales of henequen under contract and this amount was returned to the Comisión. On 18 or 19 March he retreated to Galveston, Texas taking the remaining $3,348,980 (167,449 notes). Ultimately the International Harvester Company purchased these notes from Montes, as a reimbursement for the payments that had been extorted from him, and the hoard, consisting of 71,964 Series C and 95,465 Series D notes, is still held by Navistar International Corporation, the present-day descendant of the International Harvester Company. 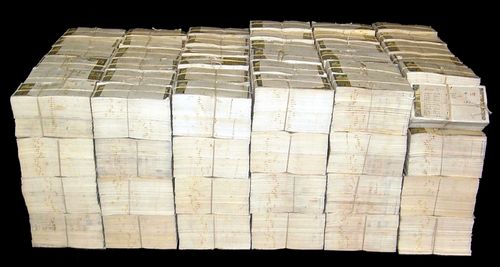 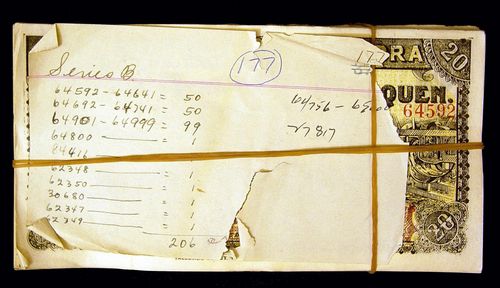 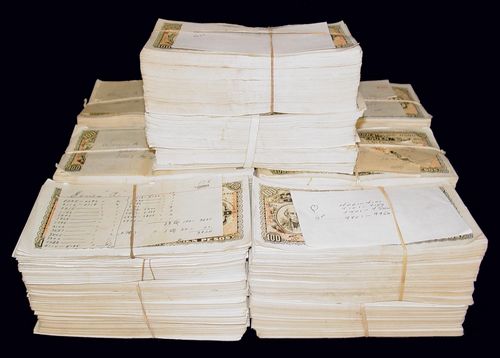 Argumedo also ransacked the local Banco Peninsular Mexicano. On 8 April its Sub-Director, A. Schmid, wrote to Carranza telling him that on 2 March Argumedo had relieved the bank of $1,100,000 in gold, whilst promising its immediate return and offering ample guarantees in henequen. When Argumedo fled he gave the bank as a guarantee $3,905,000 in Comisión Reguladora cheques, signed by Argumedo (the equivalent of 550,000 U.S.dollars) which the bank was forced to accept. Alvarado had now annulled this issue, and the bank was asking Carranza to help recover their gold and deal with the annulment. It would be more just to limit the annulment to the cheques that Argumedo had taken with him as the general annulment had devastated commerce, and the notes themselves were backed by the Comisión Reguladora's resourcesAIF, F9-69-22. However, Carranza was unsympathetic and the bank collapsed completely. 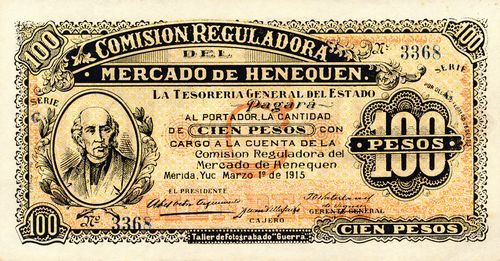 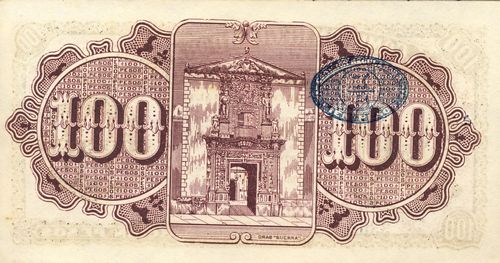 The $100 notes consequent to Argumedo’s decree of 26 February are dated 1 March 1915 and carry the signatures of Argumedo as president, Juan Villafaña as cashier (cajero) and T. O. Waterland de Vignier as general manager. 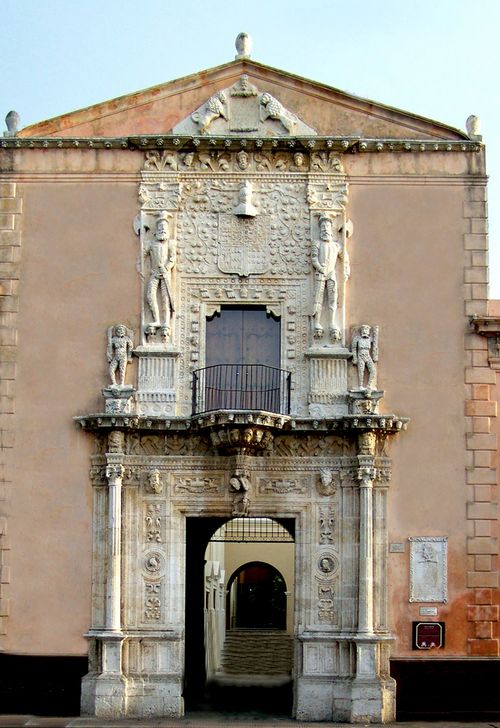 The vignette is of the front of the Casa de Montejo on the south side of the Plaza Grande in Merida. This building was constructed between 1542 and 1549 by the Spaniards who conquered the Yucatán, Francisco de Montejo and his relatives, as a family residence. On the façade the conquistadors with halberds are standing on the heads of defeated Indians. The mansion served members of the Montejo family until 1970: today it is owned by the Fomento Cultural Banamex and houses a museum.

The $100 notes will also have had a short circulation life. The $50 notes do not seem to have been printed. 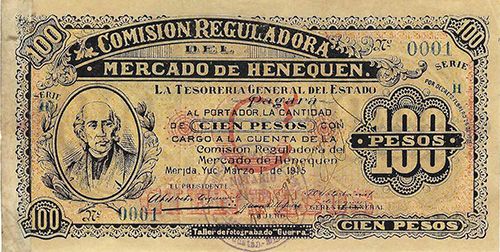 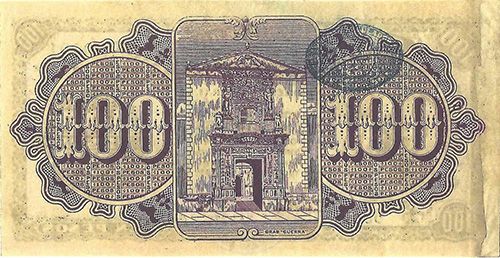