In a contract dated 13 July 1916 (and modified on 4 August) the Parsons Trading Company of New York agreed with M. C. Rolland, the duly authorized representative of the Mexican Government acting in particular for the Government of Yucatán, to print this new issue. According to the contract the notes were to be:

and so a variation (and combination) of the amounts authorized by the two decrees, núm. 536 and núm. 550. The first four denominations were to carry the legend ‘La Tesorería General del Estado’, stated to be obligatory in accordance with decree núm. 550 of 23 May and signed by the governor, Alvarado, and acting tesorero general, Victor M. Cintra. The two highest denominations were to be entitled ‘La Comisión  Reguladora del Mercado de Henequén’, to be acknowledged as bono de caja issued according to decree nûm. 536 of 9 May (as modified by decree núm. 555[text needed] of 29 May) and signed by Alvarado, as Presidente del Consejo General, and Julio Rendón, as Gerente General (General Manager).

The designs were to be prepared by Parsons from rough drafts furnished by the state. As well as the obligatory portraits of Benito Juárez and Francisco I. Madero, the vignettes were of Moctezuma(?) and various Mayan archaeological sites. 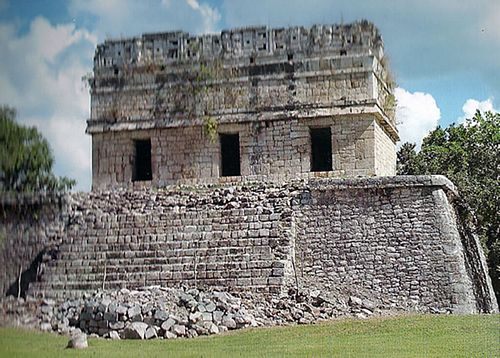 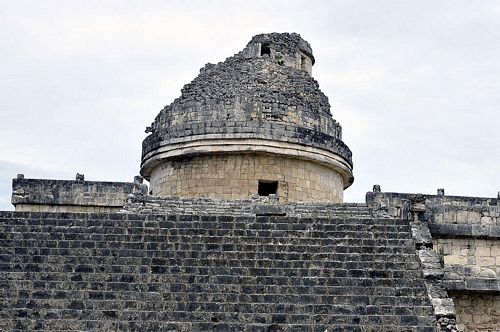 Chichanchob at Chichén Itzá is the largest and best preserved of the four buildings surrounding the main plaza. Chichanchob means "small holes" in Maya and the name is given after the small holes in its raised ridge. The building consists of a vestibule accessed by three entrances and three rooms located at the rear, and can be dated to 850 AD.

Decree núm. 550 and the original contract had specified that the notes would be ‘al portador a la vista’ but the latter phrase was removed in the modification to the contract.

The Parsons Trading Company undertook to complete delivery of the notes by 31 October, and we know that 720,000 $1 notes were dispatched on the steamer “Esperanza” on 21 September, but other consignments dragged on into December.

The notes were sent still in sheets (so that they could be charged as paper rather than banknotes) and had to be cut and stamped once they reached Mérida. The Secretaría de Hacienda in Mexico City sent a team of six peopleGerardo Chávez, Fernando Torres, Juan Montes de Oca, Miguel Portilla, Jesús Herrerías and José L. Guerrero and on 8 September the person in charge of issuing notes and cartones, Nicolás Ferraez, arranged for them to be paid five pesos a day for their laboursAY, Fondo Poder Ejecutivo Salvador Alvarado 1915-1917, Sección Tesorería General del Estado de Yucatán, Serie Hacienda Pública, vol. 199, exp. 27, letter Tesorero General to governor, Mérida, 12 September 1916.

On 29 October 1918 the new inspector, F. Irabién Rusat the start of the revolution Irabién Rus had joined the Oficina Impresora of the Secretaría de Hacienda, and had headed the Oficina de Resello in Veracruz, Mérida and Tabasco, reported to the governor on the overstamping of the Comisión Reguladora notes. Machines had deteriorated and materials were poor or lacking, so he suggested a visit to Mexico City to purchase new materialsAY, Fondo Poder Ejecutivo 1918, Sección Secretaría General de Gobierno, Serie Gobernación, vol. 410, exp. 28, letter F. Irabién Rus to governor Carlos Castro Morales, 29 October 1918. He added a list of the things that he needed:

We have details of the following incinerations of used notes

Further incinerations were made in November and DecemberDiario Oficial, Año XXIII, No. 6835, 10 February 1920.

The Comisión also incinerated sheets of notes that had not been put into circulation.