Private issues during the revolution 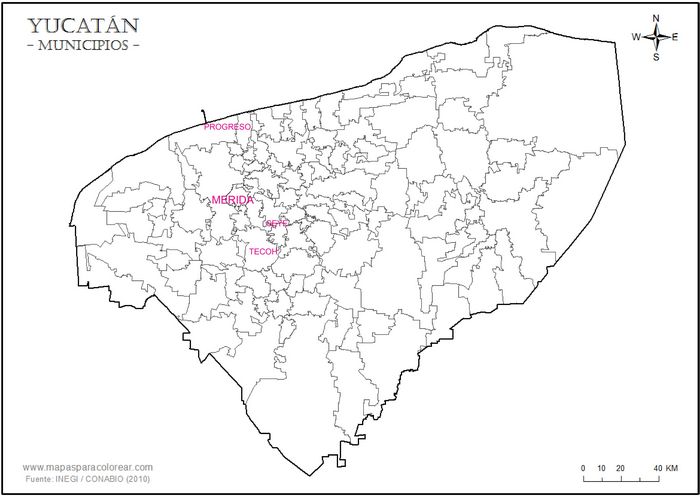 On 19 November 1913, William T. Gracey, the American consul in Progresso, reported to Nelson O’Shaughnessy, the American Charge d’Affaires in Mexico City, that the local situation had been exacerbated by the shortage of silver and the fact that the banks were holding onto currency to guarantee their own banknotes. As a consequence money was tight, and hacendados and shop keepers were desperate for funds to pay their employees and make change. Mexican pesos sold in Mérida at a premium of from 10% to as high as 17% in small quantities.

On 1 July 1914 the governor Prisciliano Cortés sent a circular to all the Jefes Políticos in the state, stating that he had noticed that not only in Mérida but in the rest of the state, people had issued various forms of paper money (vales, cheques, órdenes para entrego de mercancías y otros documentos ó valores), contrary to the Code of Commerce and the Ley General de Instituciones de Crédito. This hurt the poorer classes and impeded or even prevented the circulation of legal money or banknotes. He therefore ordered all these types of documents to be withdrawn within three days with the issuers told that if they continue to put them into circulation they would be punished according to the lawDiario Oficial, Yucatán, Año XVII, Núm. 5107, 6 July 1914.

Although Cortés refers to many examples, little has survived.

In Progreso a group of businesses met to consider solutions to the lack of change and decided that some should issue 50c cartones to be mutually accepted. The cartones were green and, as per the usual practice, carried the signature and stamp of the business. The local authorities tried to supress these issues but the businessmen sent a delegation to the governor, Prisciliano Cortés, who told the jefe político not to pursue the matterEl Economista Mexicano, Tomo LVII, Núm. 9, 29 November 1913.

Three days later, O’Shaughnessy reported to the State Department that during the previous week the Chamber of Commerce had issued $1 vales. These were being generally accepted by people, but were not available for payment of government charges at the post office, customs house etc.

These notes are dated 15 November and carry the signature of the merchant on the front and facsimile signatures of the vice-president Augusto N. Alvarez, secretary Manuel Zapata Cásares and treasurer Donaciano Ponce on the reverse. One, above, has W. A. Young whilst another has [             ][identification needed]. 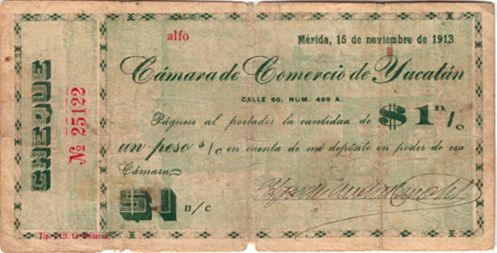 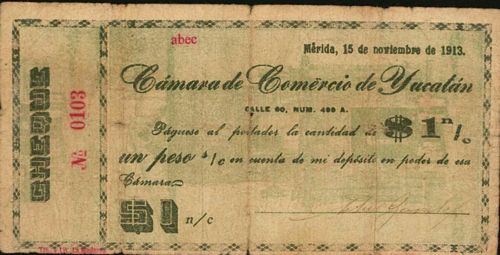 The Cámara de Comercio published the rules behind this issue. The notes were fully backed by a deposit and the issue was to be time-limited for only as long as necessary as it was proposed to withdraw them as soon as the local banks produced their own $1 and $2 notesEl Economista Mexicano, Tomo LVII, Núm. 9, 29 November 1913. The $1 Banco Peninsular Mexicano note was in fact put in circulation within a few weeks, on 27 December 1913.

These will have been withdrawn as a consequence of Cortés’ circular so the Cámara supported the Comisión Reguladora’s proposal to issue fractional currency.

Tecoh is a town located 40 kilometres south by south-east of Mérida.

In May 1914 the government reimbursed the Jefe Político of Acanceh $14 for the investigation he had made into the matter of vales al portador in TecohDiario Oficial, 9 May 1914.

A 10c note from the local grain mill[image needed].