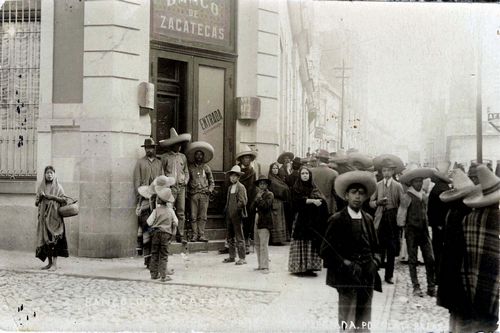 The Banco de Zacatecasfor a detailed history of the bank, see María Guadalupe Noriega Caldera, El Banco de Zacatecas: regulación, organización, operaciones y administración (1891-1916), Universidad Autónoma de Zacatecas, December 2018, granted a concession on 3 March 1891, was founded on 25 May 1891 by Jesus and Antonio Garcia, Rafael Villalpando and Luis Macias with a capital of $600,000 and began operating on 8 December of the same year. Most of the founding members were men of lineage, well-known business men, merchants and land ownersThe first board were Genaro García, as presidente, Luis Macías, Rafael Villalpando, Enrique Hatchandy, Cayetano Arteaga, Jaime G. Würst, Leopoldo Viadero, Francisco Pérez, Agustín G. González and Juan Breña. Unsurprisingly, over a dozen of the shareholders also owned shares in the Compañía Guanajuatense-Zacatecana which was the last private enterprise that leased the Zacatecas Mint (1876-1895).

Following the Ley General de Instituciones de Credito, on 12 November 1897 the bank, represented by Genaro G. García, renounced its existing rights and entered into a new contract with the federal government.

German Dectjen was manager of the main offices. 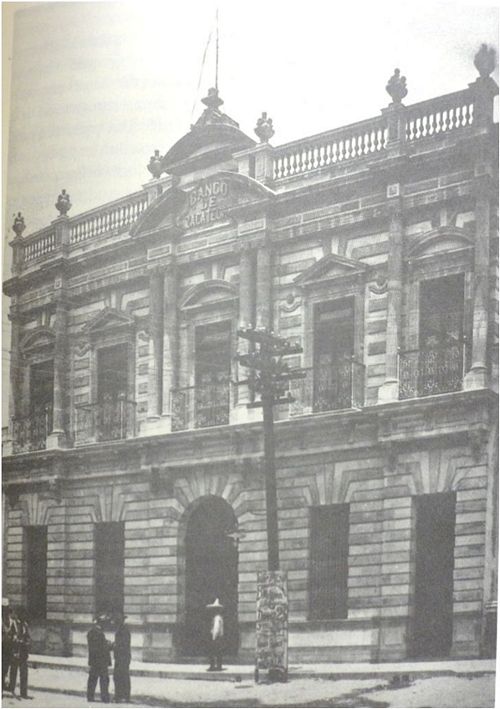 From the beginning of the armed movement in 1910 until the end of 1913 Zacatecas did not suffer serious conflict. Nonetheless, at the beginning of 1914 the winds of war began to blow across the mountainous regions of Zacatecas and with the approach of the revolutionary forces the board took the decision on 2 June 1914 to close the head offices and move to Mexico City.

On 8 December 1915, following an investigation into the bank's finances, the Comisión Reguladora e Inspectora de Instituciones de Crédito declared that the bank was within the terms set by the Ley General and would keep its concession.

The bank issued notes in seven denominations ($1, $5, $10, $20, $50, $100 and $500) printed by the American Bank Note Company in New York. All of them bear a vignette (C 181) of Francisco García SalinasFrancisco García Salinas was born on the Hacienda of Santa Gertrudis, Zacatecas in 1786. He studied in the seminary of Guadalajara and returned to his hometown to dedicate himself to the mining industry. When the War of Independence ended, he was counselor of the Municipal Government of Zacatecas during 1821. While a Senator in 1825, he pointed out serious financial errors to the Ministry of the Treasury. Because of this, he was appointed Minister of the Treasury in the cabinet of Guadalupe Victoria. He held this post until 1828 when he was elected Governor of Zacatecas (1828-1834). In 1841, President Santa Anna offered him the post of Minister of the Treasury once again, which he refused shortly before his death. He died in San Pedro, Zacatecas in 1841. (governor from 1828 to 1834) on the face as well as different allegories and rural or industrial scenes. The ABNC engraved special vignettes of "oxen ploughing" (C 438) and "a view of a mining district" (C 441). For the backs the ABNC engraved a special vignette of the Cerro de la Bufa (C 439).