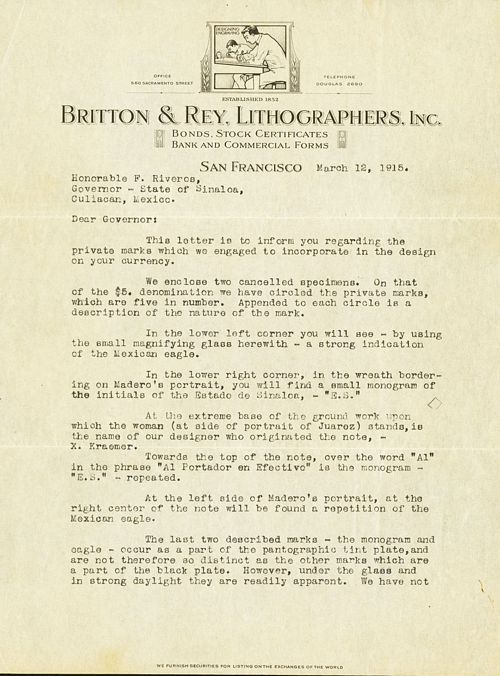 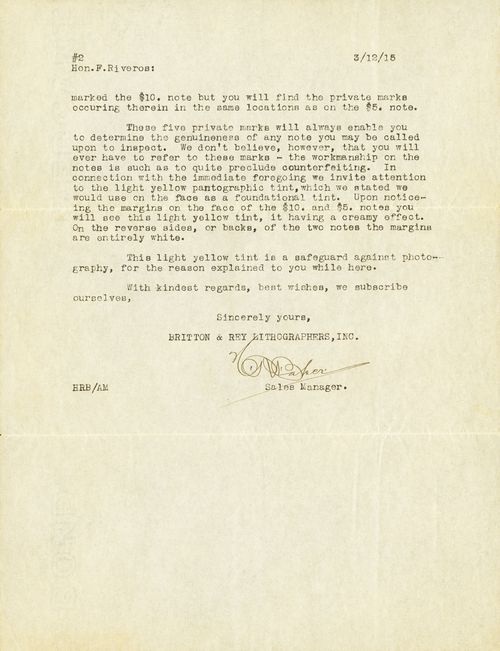 BRITTON & REY, LITHOGRAPHERS, INC
SAN FRANCISCO March 12, 1915
Honorable F. Riveros,
Governor – State of Sinaloa,
Culiacan, Mexico.
Dear Governor:
This letter is to inform you regarding the private marks which we engaged to incorporate in the design of your currency.
We enclose two cancelled specimens. On that of the $5. denomination we have circled the private marks, which are five in number. Appended to each circle is a description of the nature of the mark.
In the lower left corner you will see – by using the small magnifying glass herewith – a strong indication of the Mexican eagle.
In the lower right corner, in the wreath bordering on Madero’s portrait, you will find a small monogram of the initials of the Estado de Sinaloa, - “E.S.”
At the extreme base of the ground work upon which the woman (at side of portrait of Juarez) stands, is the name of our designer who originated the note, - X. Kraemer.
Towards the top of the note, over the word “Al” in the phrase “Al Portador en Efectivo” is the monogram – “E.S.” – repeated.
At the left side of Madero’s portrait, at the right center of the note will be found a repetition of the Mexican eagle.
The last two described marks – the monogram and eagle – occur as a part of the pantographic tint plate, and are not therefore so distinct as the other marks which are a part of the black plate. However, under the glass and in strong daylight they are readily apparent. We have not marked the $10. note but you will find the private marks occurring therein in the same locations as on the $5. note.
These five private marks will always enable you to determine the genuineness of any note you may be called upon to inspect. We don’t believe, however, that you will ever have to refer to these marks – the workmanship on the notes is such as to quite preclude counterfeiting. In connection with the immediate foregoing we invite attention to the light yellow pantographic tint, which we stated we would use on the face as a foundational tint. Upon noticeing the margins on the face of the $10. and $5. notes you will see this light yellow tint, it having a creamy effect. On the reverse sides, or backs, of the two notes the margins are entirely white.
This light yellow tint is a safeguard against photography, for the reason explained to you while here.
With kindest regards, best wishes, we subscribe ourselves,
Sincerely yours,
BRITTON & REY LITHOGRAPHERS, INC.
[ ]
Sales Manager. 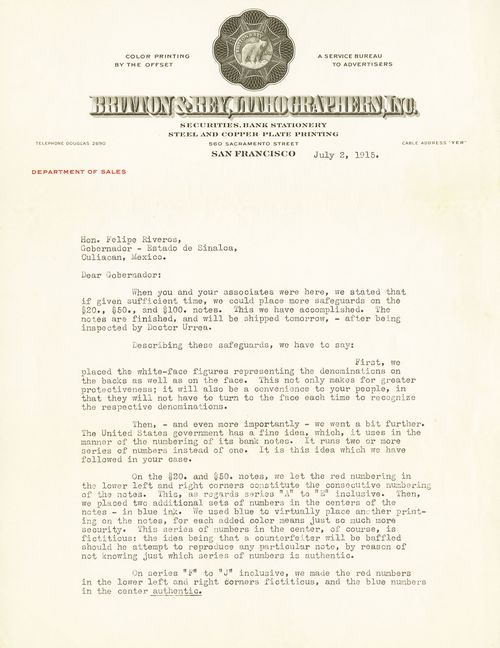 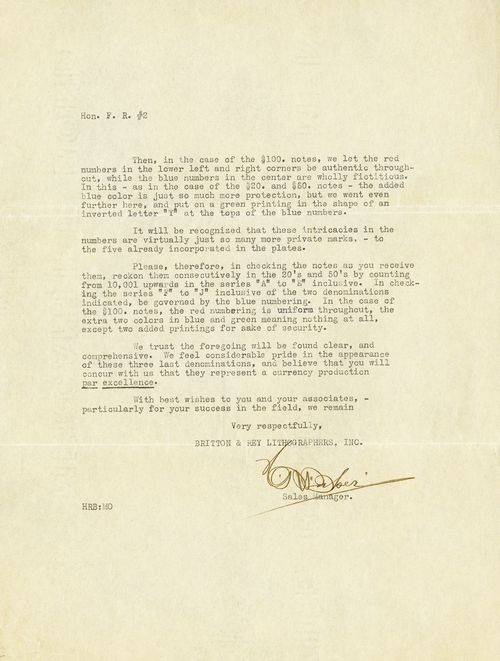 BRITTON & REY, LITHOGRAPHERS, INC
SAN FRANCISCO July 2, 1915
Hon. Felipe Riveros,
Governor – Estado de Sinaloa,
Culiacan, Mexico.
Dear Gobernador:
When you and your associates were here, we stated that if given sufficient time, we could place more safeguards on the $20., $50., and $100. notes. This we have accomplished. The notes are finished, and will be shipped tomorrow, - after being inspected by Doctor Urrea.
Describing these safeguards, we have to say:
First, we placed the white-face figures representing the denominations on the backs as well as on the face. This not only makes for greater protectiveness; it will also be a convenience to your people, in that they will not have to turn to the face each time to recognize the respective denominations.
Then – and even more importantly – we went a bit further. The United States government has a fine idea, which, it uses in the manner of the numbering of its bank notes. It runs two or more series of numbers instead of one. It is this idea which we have followed in your case.
On the $20. and $50. notes, we let the red numbering in the lower left and right corners constitute the consecutive numbering of the notes. This, as regards series “A” to “E” inclusive. Then, we placed two additional sets of numbers in the centers of the notes – in blue ink. We used blue to virtually place another printing on the notes, for each added color means just so much more security. This series of numbers in the center, of course, is fictitious: the idea being that a counterfeiter will be baffled should he attempt to reproduce any particular note, by reason of not knowing just which series of numbers is authentic.
On series “F” to “J” inclusive, we made the red numbers in the lower left and right corners fictitious, and the blue numbers in the center authentic.
Then, in the case of the $100. notes, we let the red numbers in the lower left and right corners be authentic throughout, while the blue numbers in the center are wholly fictitious. In this – as in the case of the $20. and $50. notes – the added blue color is just so much more protection, but we went even further here, and put on a green printing in the shape of an inverted letter “Y” at the tops of the blue numbers.
It will be recognized that these intricacies in the numbers are virtually just so many more private marks, - to the five already incorporated in the plates.
Please, therefore, in checking the notes as you receive them, reckon them consecutively in the 20’s and 50’s by counting from 10,001 upwards in the series “A” to “E” inclusive. In checking the series “F” to “J” inclusive of the two denominations indicated, be governed by the blue numbering. In the case of the $100. notes, the red numbering is uniform throughout, the extra two colors in blue and green meaning nothing at all, except two added printings for sake of security.
We trust the foregoing will be found clear, and comprehensive. We feel considerable pride in the appearance of these three last denominations, and believe that you will concur with us that they represent a currency production par excellence.
With best wishes to you and your associates, - particularly for your success in the field, we remain
Very respectfully,
BRITTON & REY LITHOGRAPHERS, INC.
[ ]
Sales Manager.

Chihuahua, julio 29 de 1915.
Britton and Ray, Lithographers
560 Sacramento, St.
San Francisco, cal.
Dear Sir:-
I have just seen three samples of the 20.00, $50.00 and $100.00 of the paper money prepared by that house for the State of Sinaloa. I have found that the work is satisfactory to us save the fact of the signatures of the “Tesorero General” and “Interventor” graved in faccimil instead of leasing the space in blanc as it is establish in our contract as well as for the $5.00 and $10.00 nominations.
If the whole job is absolutely same as the samples I regret to say that I am forbidden to take and put in circulation and consequently will have to ask that house to take that work back and prepare the issue as it ought to be without those signatures.
Expecting to hearing from you soon I beg to remain
Yours truly, 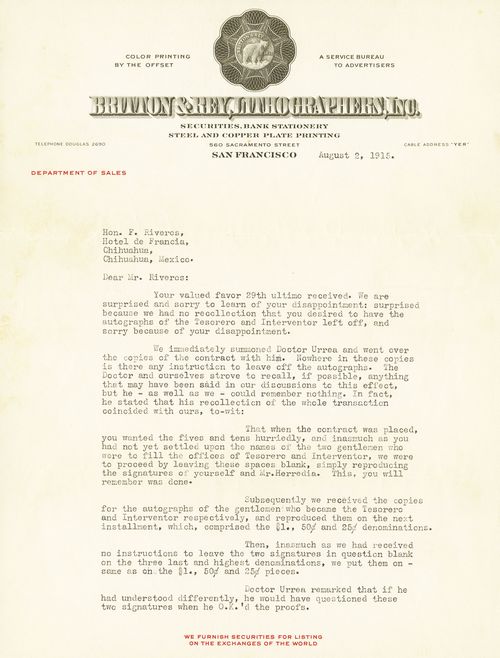 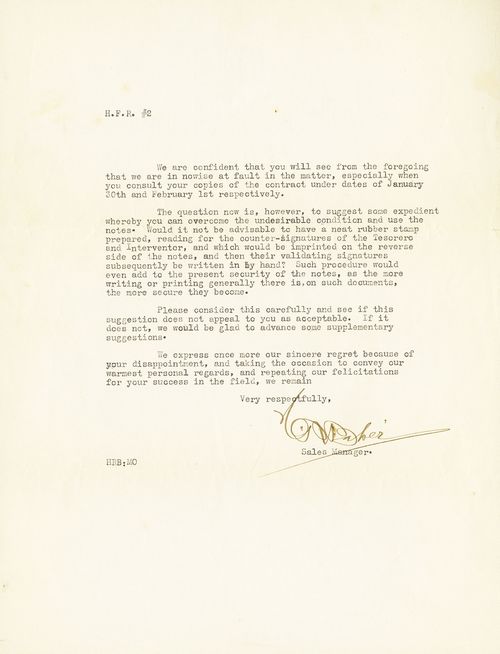 BRITTON & REY, LITHOGRAPHERS, INC
SAN FRANCISCO August 2, 1915
Hon. F. Riveros,
Hotel de Francia,
Chihuahua, Mexico.
Dear Mr. Riveros:
Your valued favor 29th ultimo received. We are surprised and sorry to learn of your disappointment: surprised because we had no recollection that you desired to have the autographs of the Tesorero and Interventor left off, and sorry because of your disappointment.
We immediately summoned Doctor Urrea and went over the copies of the contract with him. Nowhere in these copies is there any instruction to leave off the autographs. The Doctor and ourselves strove to recall, if possible, anything that may have been said in our discussions to this effect, but he – as well as we – could remember nothing. In fact, he stated that his recollection of the whole transaction coincided with ours, to-wit:
That when the contract was placed, you wanted the fives and tens hurriedly, and inasmuch as you had not settled upon the names of the two gentlemen who were to fill the offices of Tesorero and Interventor, we were to proceed by leaving those spaces blank, simply reproducing the signatures of yourself and Mr. Herredia. This, you will remember was done.
Subsequently we received the copies for the autographs of the gentlemen who became the Tesorero and Interventor respectively, and reproduced them on the next installment, which, comprised the $1., 50c and 25c denominations.
Then, inasmuch as we had received no instructions to leave the two signatures in question blank on the three last and highest denominations, we put them on – same as on the $1., 50c and 25c pieces.
Doctor Urrea remarked that if he had understood differently, he would have questioned these two signatures when he O.K.’d the proofs.
We are confident that you will see from the foregoing that we are in nowise at fault in the matter, especially when you consult your copies of the contract under dates of January 30th and February 1st respectively.
The question now is, however, to suggest some expedient whereby you can overcome the undesirable condition and use the notes. Would it not be advisable to have a neat rubber stamp prepared, reading for the counter-signatures of the Tesorero and Interventor, and which would be imprinted on the reverse side of the notes, and then their validating signatures subsequently be written in by hand? Such procedure would even add to the present security of the notes, as the more writing or printing generally there is on such documents, the more secure they become.
Please consider this carefully and see if this suggestion does not appeal to you as acceptable. If it does not, we would be glad to advance some supplementary suggestions.
We express once more our sincere regret because of your disappointment, and taking the occasion to convey our warmest personal regards, and repeating our felicitations for your success in the field, we remain
Very respectfully,
BRITTON & REY LITHOGRAPHERS, INC.
[ ]
Sales Manager.