The only official issue during the revolution was of fractional currency (moneda fraccionaria) that provisional governor Martín TrianaMartín Triana Guzmán was born in San Miguel del Mezquital (now Miguel Auza), Zacatecas, in 1885. In 1911, he joined the armed movement against Porfirio Díaz, fighting in the Lagunera region and occupying Sombrerete in May 1911. After the decena trágica, he again took up arms against Huerta and fought at Torreón and Zacatecas, taking part in the capture of that city in June 1914. When Villa fought with Obregón at Celaya in May and June 1915, Triana defected to the Carrancistas and was provisional governor of Aguascalientes from 10 August 1915 to 13 June 1916. In 1917 he retired to private life and died in Mexico City on 9 February 1934. authorised[text needed] on 29 September 1915. The amount issued finally rose to $11,500Periódico Oficial, Aguascalientes, 28 May 1916. 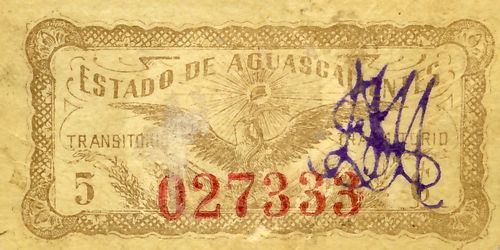 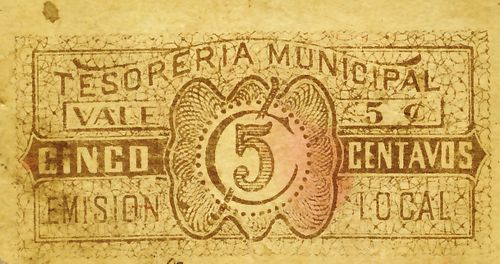 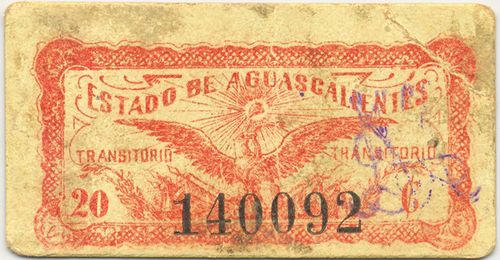 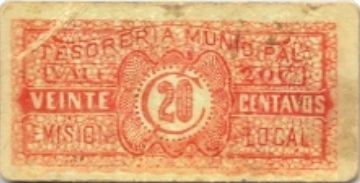 On 23 May 1916 governor Martín Triana set a period until 30 June for the Tesorería Municipal to withdraw these notes, exchanging them for Gobierno Provisional de México notes. Any outstanding notes would be null and void, whilst the Tesorería would incinerate the notes it had collected.