On 9 February 1915 General Brigadier Félix Ortega, the new jefe político, decreed (decree núm. 1) that the Cornejo notes were null and worthless. Annulling the Cornejo notes caused upset in La Paz and the town council (which included the leading businessmen) told Ortega that his decree would be severely detrimental because the lack of funds would means people could not buy necessities and small businesses would grind to a halt. Ortega replied that the decree was intended to avoid the economic isolation of the territory as the Cornejo notes were not accepted on the mainland opposite and that he was attempting to put into circulation a currency that would be accepted in Sonora, Sinaloa and Tepic. He added that holders of large quantities of Cornejo notes could exchange them over time for notes of general circulation (such as the sábanas and dos caritas of Chihuahua, and the issues of Sinaloa’s Riveros and the Estado de Sonora issue. Besides, the lower value cartones with the Jefatura’s resello still remained in circulation to facilitate day-to-day transactions. Finally, troops and public employees were being paid with notes of general circulation, so these would be available.

At a meeting in La Paz on 22 March a meeting of local businessmenCayetana H. de Ojeda, Felipe R. Cota, Otto Hach, Gabriel R. Díaz, Filemón C. Piñeda, Félix Carrillo, José A. Cota, Enrique von Borstel, Filiberto Valdés, Conrado de la Peña, representing Quong Ley Yuen, Jerónimo Cota, Susano Gerardo, Guillermo Wong, Aparicio Contreras, José María Quijada, Pablo León. Elías Lucero, Jedús Tagle, Eugenio Yuen, Manuel Avilés, León Yuen, Manuel Inzunza, Umberto Unzón, Mauricio Taylor and Manuel P. Estrada met with Presidente Municipal Alejandro E. Allinson, Manuel C. Moreno and Juan M. Nuño, Secretario de Gobierno representing General Félix Ortega agreed to the withdrawal of the local currency (the vales of the Jefatura Politica and private issues?), on conditions that would not affect them or their customers. They agreed that over the next two days (23-24 March) they would take in the notes at par and without restriction, and then hold them until the government could exchange them for paper money of general circulation. They also earmarked a reasonable amount in banknotes to be sent to Sonora to change for that state’s fractional currency, to be use for day-to-day transactions. For its part, the Jefatura Política agreed to produce a new issue of paper currency to redeem the existing notes, and also redeem some such deposits with coins.

The next day, 23 March, in a decree (decree núm. 6), Ortega acknowledged the junta’s help but stated that as there was insufficient time to bring in the Sonora fractional notes he was repealing the circular that fixed the acceptance of the cartones at 20% in payments of any amount and decreed that the vales of the Jefatura Política (and any that it might issue in future to replace deteriorated notes) were of forced circulation in the district, at par and without any limitation, without prejudice to the efforts being made to change the local paper currency for that of the rest of the country.

However, despite the threat of fines, some traders continued to refuse to accept the notes, so on 31 March Ortega and his secretary, Juan M. Nuño, met again with some forty-eight businessmenM. R. Armenta, Manual Avilés, Otto Bach (for A. Ruffo), Eduardo S. Carrillo, M. S. Carrillo, Mariano Carlón, G. Castro. Francisco Castro, R. R. Castro, Aparicio Contreras, I. Cosío, F. R. Cota, Gerónimo R. Cota, C. de la Peña, C. R. Díaz, M. P. Estrada, F. V. Ferrer, Susano Geraldo, L. S. Inzunza, José León, Pablo León, Teodoro León, José Lizardi, Elías Lucero, Lino Martínez, Miguel Mendoza, Miguel Moreno, Y. Moyrón, Juan I. Osuna, N. Peláez, Filemón C. Piñeda, Manuel Quijada, Rochel Ruffo y Cia., Cayetana S. de Ojeda, C. Sepúlveda, E. A. Sepúlveda (for Elena Sepúlveda de G.), Esteban Talamantos, Humberto Unzon, Antonio Usárraga, Filiberto Valdez, E. von Borstal, Guillermo Wong, Luis I. Yuan, Eugenio Yuen, León Yuen, Quong Ley Yuen. Ortega stated that the period fixed by the earlier meeting for the withdrawal of the currency had proved too short and he saw himself obliged to decree its forced circulation but that he was aware of the great trouble that this money had caused and the even greater trouble that it would continue to cause if left in circulation. The meeting then approved that:
(1)    the Jefatura Política would issue notes (bonos) of five, ten and twenty pesos, to replace the existing notes;
(2)    these would be negotiable and that the tax offices (Oficinas Recaudadores) would accept 20% in payment of taxes and dues; and
(3)    in place of the existing cartones businesses (casas de comercio) would issue vales under their own responsibility, to facilitate small change.

Finally,
(6)    the official paymasters and individuals would pay wages in money of general circulation in the country; and
(7)    the Jefatura Política would issue a decree ordering that only money in general circulation should be used in paymentsABCS, Gobernación, vol. exp. 106: AGN, Colección Manuel González Ramírez 75/234.

So the same day, in decree núm. 7, Ortega decreed that the public offices would henceforth make payments only in currency that was in general circulation in the country and with vales issued, with the authorization of his Jefatura, by local merchants. The merchants would be obliged to accept the current vales from the public and, every Saturday between four and five in the afternoon, would present them to the Jefatura Política to be exchanged for bonos. 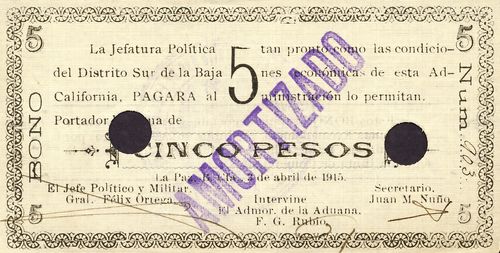 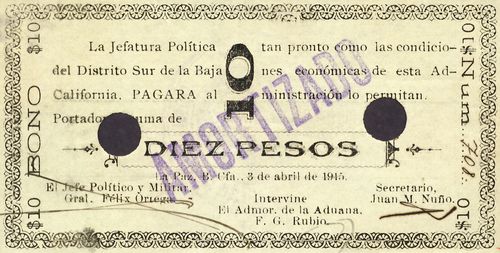 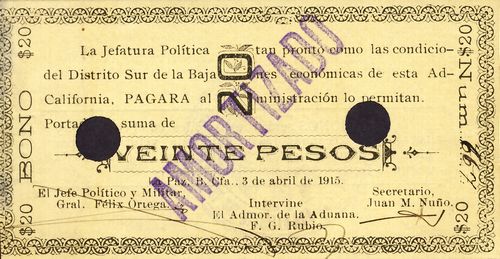 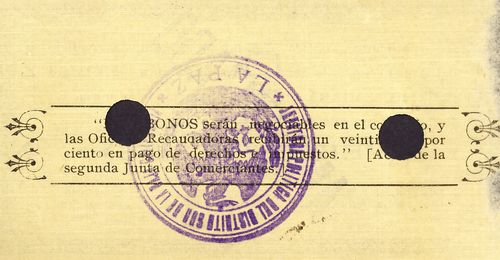 The new notes are dated 3 April.  These carry the promise that the Jefatura Política would honor them as soon as economic conditions permitted and (as agreed) the statement that they were not only negotiable in commerce, but also acceptable by the Oficinas Recaudadoras in payment of 20% of any taxes due. They carry the signatures of Ortega, Secretario Juan M. Nuño as secretary, and customs administrator (Administrador de la Aduana) F. G. Rubio as interventor.

On 4 April Ortega met with Luis J. García, Juez de Primera Instancia, Francisco González Rubio and Carlos Pérez Cortés, administrador and contador of the Aduana Marítima respectively, and Juan M. Nuño, Secretario del Gobierno, to verify the tally of the bonos issued by the Jefatura Política in exchange for the 5c, 10c, 20c and 50c vales issued by the Jefatura Política during the administrations of the Cornejos and Eduardo S. Carrillo. As a consequence they issued 400 $5, 300 $10, and 250 $20 notes, all signed by Ortega, Nuño and Rubio and stamped on the back with the Jefatura Política seal ABCS, Gobernación, vol. 648, exp. 106. Obviously, further issues followed.

Although the town council went along with Ortega, some businesses refused to accept his notes, arguing that they had no value, and demanded Carrancista notes, banknotes or silver coins. Others accepted the notes as a discount, whilst other preferred to close up.

On 19 April Nuño wrote to the Subprefectos Políticos of San Antonio and San José del Cabo and the Subprefecto Político and Presidente Municipal of Todos Santos that he had learnt that businesses were not complying with the decree, and so the general public still held quantities of valesibid.. José C. Ojeda, the acting Presidente Municipal of Todos Santos, replied that he had published the instruction and had had no complaintsibid..

On 22 April the Presidente Municipal of Todos Santos, E. R. Cota, asked which Convention issues by the states were of forced circulation and was told that, according to the Departamento de Gobernación y Comunicaciones, in Chihuahua, they were the sábanas and dos caritas of Chihuahua, the three signatures Estado de Durango of Pastor Rouaix, the Monclova and Ejército Constitucionalista issues, Felipe Riveros’s Sinaloa issue and José María Maytorena’s Sonora issues ABCS, Gobernación, vol. 642, exp. 150.

It will have been during the administration of the Villista Ortega that issues that were undoubtedly Villista that circulated on the peninsula, such as Chihuahua's dos caritas or Sonora's Estado de Sonora, were revalidated. On 8 May 1915 businesses complained to Ortega about the introduction of counterfeit notes and vales. He therefore created a commission, composed of Manuel C. Moreno, representing the government; Agustín Bustamente, the perito valuador de contribuciones; Cristiano P. Pérez, the administrador principal del Timbre, and two merchants, Catarino Galván and Francisco Velasco, to examine notes, restamp the genuine and deposit the counterfeit in the Jefatura Política, giving the holders a receipt, to await a final determination by a commission from Sonora or wherever. The commission originally worked for four hours a day checking notes. Ortega also ordered the Administrador de la Aduana Marítima to check all notes brought into the port of La Paz and to restamp those that were to circulate in the districtABCS, Gobernación, vol. 642, exp. 150.

One stamp was a Mexican eagle with 'REPUBLICA MEXICANA' and 'LA PAZ, B. C.' 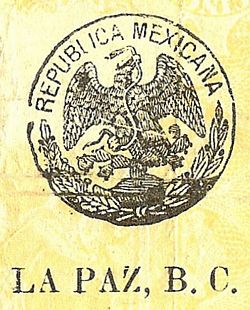 This is known used on the Monclova, Estado de Sonora and dos caritas issues.

This $50 dos caritas had already been revalidated in Guaymas, Sonora.

On 15 May Todos Santos reported that the Administración Principal del Timbre was refusing to accept unrevalidated notes and the local junta revisora was only accepting them on deposit. So, on 18 May, La Paz sent Todos Santos $500 in notes of general circulation to exchange with the general public for notes without a resello. Businesses that had larger quantities needed to send them directly to the Jefatura Política to be restampedibid..

On 17 May El Triunfo asked, if because of the problems, businesses could accept notes without a revalidationibid..

On 27 May, in decree núm. 12, Ortega stated that the difference between banknotes and the revolutionary issues was growing daily, and leading to inflation and other troubles. However, banknotes were merely promises to pay, backed by deposits, yet those deposits had been used up in Huerta’s time. When the time came, the government would honor the notes of the jefes revolucionarios before those of the banks. So to protect the public, he decreed that henceforth legal tender would consist of Mexican coins of gold or silver and the notes of general circulation in the states that submitted to the Convention, unless the Convention or Francisco Villa, Jefe de las Operaciones, decided otherwise. However, he was overthrown two days later.

Very few of these notes would have been put into circulation and there seems to have been no official mechanism for their withdrawal. The examples illustrated above with low serial numbers have been punch cancelled and overprinted 'AMORTIZADO' (AMORTISED).