Luis Terrazas began to extend his interests into banking in 1878. On 8 March the Chihuahuan government, then headed by Angel Trias, gave Terrazas, Félix Francisco Maceyra and Antonio Asúnsolo permission to establish a bank of issue under the presumptuous name El Banco Mexicano.

The bank could issue up to 300,000 pesos in twenty-five centavos, fifty centavos and one peso notes, payable in legal tender or in hard cash at an 8% discount (en moneda corriente ó en pesos fuertes al 8 por ciento de cambio). The bank was given eight months to establish itself or the concession would lapsePeriódico Oficial, 10 March 1878. The bank also had to satisfy the government that its issue was backed by mortgages on property, though this proviso was probably more a sign of growing refinement in drafting legislation than that this was the first concession granted to native Mexicans. Later legislation, on 31 July 1882, inter alia, enabled the state government to appoint interventors for the bankPeriódico Oficial, 12 August 1882.

Terrazas had yet to establish his pre-eminence in Chihuahua and Maceyra and Asúnsolo, his partners in this venture, were wealthy landowners in their own right. All three had been assessed at $2,000 in Trias’ forced loan of 1876Boletín Militar, 1 July 1876 and the last two were associates in the business firm of Asúnsolo y MaceyraLa República, 28 August 1868. In 1879 the principal shareholders were Félix Francisco Maceyra, Luis Terrazas, Luis Faudoa, Miguel Salas and Ramón Luján. By 1881 the bank was advertising that it bought ‘cattle hides, copper, lead, cotton, sugarcane’ and made advances on these itemsBoletín Militar, 1 January 1881 indicating that in the beginning these banks were not just concerned with financial transactions but also acted as brokers and commodity dealers.

The bank was also connected with the Chihuahua mint. In 1879 a group of businessmen who were the main shareholders of the Banco Mexicano, through their solicitor Gustavo Sommer, sought for the decree banning the lease of mints to be revoked. As soon as the government gave its assent the shareholders negotiated a lease for five years of the mint in Chihuahua. The lease was dated 30 December 1879 and obtained Presidential approval on 5 January 1880. The contract was extended on 12 July 1883 for six years and again on 4 February 1888. It was rescinded on 21 February 1895AP papers, Box 3:1 “Historia Numismática de Chihuahua”.

On 23 March 1886 the Secretario de Hacienda, Manuel Dublán, signed an agreement with Carlos Pacheco, representing the banks of Chihuahua, José del Collado, a director of the Banco Nacional de México, and Ramón Uzandizaga, manager of the Chihuahua branch. In it they recognized that the Chihuahuan banks had been established by concessions from the state Congress, at a time when federal control was unclear, and so the Secretaría de Hacienda confirmed the Banco Mexicano’s concession for a further 25 years, and that it could issue up to $100,000 in notes of various denominations payable in copper at par or in silver at a 8% discount or at par in hard currency (pagaderos en cobre a la par o en plata con 8% de descuento o pagaderos a la par en pesos fuertes)AHBanamex, Actas del Consejo de Administración, 23 March 1886, folios 246-250. 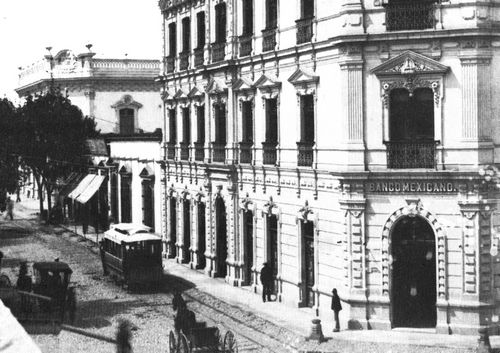 The bank's offices were originally the premises used by Félix Francisco Maceyra at [ ] and in 1881 were at the corner of Independencia and Victoria.

The print run was:

These early 25c has small serial numbers. Most of the 50c have a brown seal as part of the background but this was changed between [133734?] and 133810 to an orange seal. The $1 note was printed in sheets of twelve notes with the range of series letters A-L thus:

The signatories are Félix Francisco Maceyra as President and Ramón Luján as Accountant (Contador).