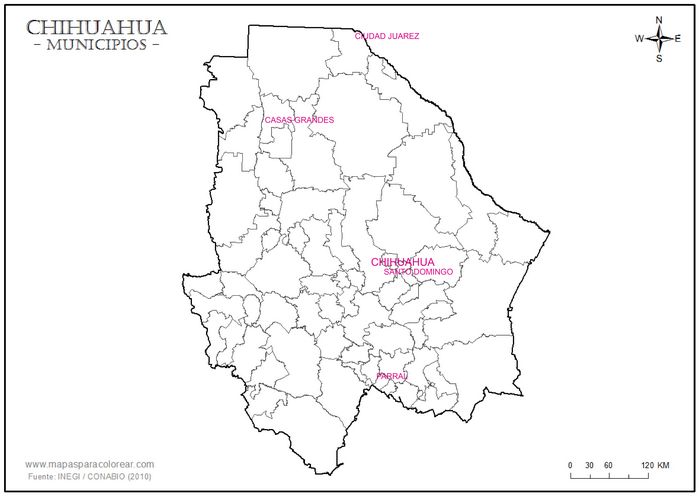 The United States passed its American Silver Purchase Act on 19 June 1934 and as a result of the increase in the price of silverThe price of silver was as low as 28c (US) in 1932 but rose to 35c in 1933, 48c in 1934 and 64c in 1935, silver coins began to be hoarded to be remelted at a profit. On 26 April 1935 the Mexican government reacted by withdrawing silver coins from circulation and arranging for them to be replaced with Banco de México notes. However, the sudden shortage led many banks and other commercial organisations, particularly Chambers of Commerce, to issue scrip in the form of bearer cheques during the spring of 1935.

In Chihuahua, the new one peso notes of the Banco de México were not expected to arrive before the second half of May and in the meantime two banks made emergency issues. Both were issued on 30 AprilEl Heraldo, 30 April 1935: El Heraldo, 1 May 1935 and soon found acceptance by government offices, the local banks, businesses and cinemas.

One emergency issue, a total of 10,000 pesos in up to five denominations (50c, $1, $2, $3 and $4[images needed]In an interview on 29 April 1935 Rafael F. Vallina, manager of the Banco Mercantil de Chihuahua, and Eloy Vallina, of the Banco Comercial Mexicano, said that their banks would each issue cashiers' notes (vales de caja al portador) for fifty centavos and one peso (El Correo de Chihuahua, 29 April 1935). On 30 April the Banco Mercantil said it was issuing all five values (La Voz de Chihuahua, 30 April 1935) whilst later on the banks were said to be redeeming notes for 50c, $1, $2 and $3 (El Heraldo, 3 May 1935). The $4 value is mentioned in El Heraldo, 30 April 1915 and 1 May 1915), was drawn on the Banco MercantilThe Banco Mercantil de Chihuahua, S. A. opened its doors for business on 24 August 1925. The principal stockholders were the Blanco brothers, Spaniards and owners of flour mills in Chihuahua. José F. Blanco was the President and Chairman of the Board, Benito Martínez, a Spaniard, one of the owners of the Compañía Cervecera de Chihuahua, S. A., a brewery, Vice President, and Rafael F. Vallina, the Manager. The bank’s capital was to be $250,000. The institution was to do a general banking business and would pay 4% interest per annum on saving deposits, whereas no other banking institution in the city paid any interest whatever on deposits (SD papers 812.516/373, report of consul to Department of State, 26 August 1925). Rafael F. Vallina invited his brothers, including Eloy, to work with him. by the Financiadora de Comercio, S.A. There were one thousand notes in the $2 value printed on white paper.

By 9 May counterfeits of the $2 Banco Mercantil note had appeared. Curiously, the authentic notes had the name of the manager, Vallina, wrongly spelt with a 'B' whilst in the forgeries this error had been correctedAlso the serial numbers were greater than 1000. El Heraldo, 16 May 1935; La Voz de Chihuahua, 16 May 1935. The bank asked people to bring in their notes to be restamped and on 11 May issued new notes that would be impossible to forgeEl Heraldo, 9 May 1935: La Voz de Chihuahua, 9 May 1935: El Heraldo, 11 May 1935. On 30 May Juan Ortiz was arrested in Gómez Palacio whilst trying to pay with forged banknotes (billetes falsificados de un banco de esta población (i.e. Chihuahua)). El Heraldo, 1 June 1935. By 13 May the Banco Mercantil was asking people to redeem the notes (titulos de crédito) at its offices and not put them back into circulationEl Correo de Chihuahua, 13 May 1935.

The forgers were led by Ordorico García. García was a tax collector (recaudador de rentas) in Villa Aldama and then a businessman in Ciudad Delicias. When he saw the vales of the Banco Mercantil, he realised that they would be easy to copy and contacted his friend, Salvador Rubalcaba, who worked in the El Norte press. Rubalcaba made the plate and rubber seal, which García took to Edmundo Espinosa at the Gutenberg Press who made a thousand copies of the $2 note and a thousand of the $1 notes. However, García refused to accept the latter as they were a different colour from the genuine notes. García used fourteen $2 notes (numbered 2737 to 2751) to settle an account at a furniture store and when the shopkeeper tried to deposit them at the Banco Mercantil and found they were false, he put the police on to the trail of García and the othersLa Voz de Chihuahua, 15 May 1935.

Meanwhile the false $2 notes continued to circulate and people were told to hand them in to the Procuraduría or bank, so that they could be destroyedLa Voz de Chihuahua, 23 May 1935.

At the end of May Juan Ortiz, driven by poverty, tried to pass some counterfeit notes of the Banco de Chihuahua (sic) in Gómez Palacio and was caughtEl Siglo de Torreón, 30 May 1935.

This bank’s issue[images needed], totalling 12,000 pesos, was drawn on the Banco Comercial Mexicano by Comisiones y Representaciones, S. A.

Depending on the relationship between the nominal drawer, Comisiones y Representaciones, S. A., and the Banco Comercial Mexicano some of these may have had the signature of Eloy S. Vallina García.

Similar notes, ranging in value from fifty centavos to four pesos, were also issued in other towns in the stateEl Heraldo, 11 May 1935.

For example, in Casas Grandes in the north west of the state all coins in values up to one peso disappeared and were replaced by cartones of fifty centavos and one peso, issued by the Banco Mercantil, and cheques of certain well-established businessmen drawn on commercial housesEl Correo de Chihuahua, 21 May 1935.

By 29 April the local banks and public offices in Ciudad Juárez were collecting in all the silver coinage. Because of the lack of small change, the manager of the branch of the Banco Mercantil, A. B. Carrillo, suggested to the president of the local Cámara Nacional de Comercio (Chamber of Commerce) that they ask the postmaster (administrador de correo) to issue postage stamps for use as currency (vales postales) for 25c, 50c and one peso. The suggestion was immediately forwarded to the director general (Director General de Correos)El Continental, 29 April 1935 but got bogged down in practicalitiesThe post office wanted to charge a premium (El Continental, 2 May 1935).

So the Cámara Nacional de Comercio issued its own cheques, for 25c, 50c and $1, drawn on the Banco Nacional de México and Banco Mercantil de Chihuahua, and initialled by Magarito Herrera as Presidente and R. Anchondo as Tesorero.

The new $1 notes of the Banco de México finally reached Ciudad Juárez on 16 May El Continental, 17 May 1935but it was not until 28 May that the branches of the Banco Nacional de México and Banco Mercantil received enough to announce the withdrawal of the Chamber of Commerce vales, which they hoped to achieve by 30 JuneEl Continental, 28 May 1935.

On 30 April the Banco Mercantil in Chihuahua sent its Ciudad Juárez branch vales in the denominations of 25c, 50c and one peso[mages needed]El Continental, 30 April 1935. 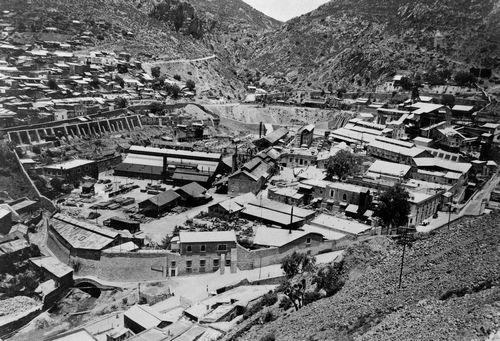 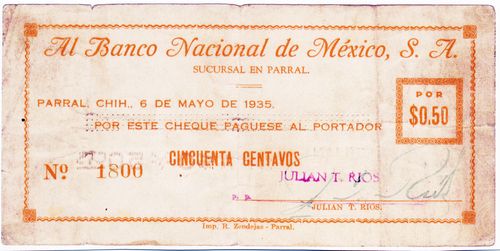 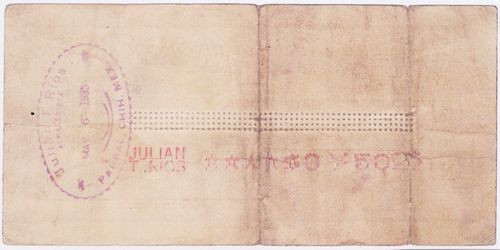 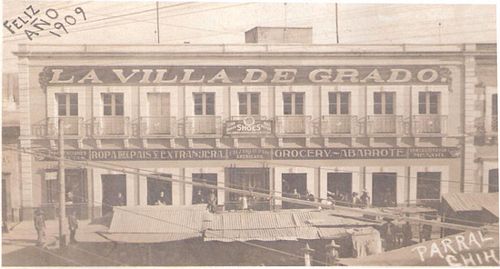 La Villa de Grado department store, offering Mexican and foreign clothes, shoes and groceries (and also agricultural and mining machinery and explosives), was constructed in 1908 by the architect Federico Gabriel Amérigo Rouvier for Federico Stallforth, a German merchant who spent many years in Parral, acquiring a fortune and becoming a major benefactor. It was here that Francisco Villa bought goods to be resold on his hacienda at Canutillo for the same price.