On 22 October 1914 the Tesorería General in Chihuahua issued its circular núm. 18, that in order gradually to withdraw the sábanas Recaudadores de Rentas should make all their payments in the new dos caritas, sending their existing sábanas to the Tesorería to be exchangedAMP, Gobierno, Gobierno del Estado, Correspondencia, caja 21, exp 2. At the end of the year it was announced that the sábanas (el papel “viejo villistas”) would soon cease to be legal tender: this news caused disturbances in Chihuahua and Santa Rosalía with holders demanding that the notes be exchangedPrensa, 3 January 1915.

On 16 February 1915 the Chihuahua Oficina de Información stated that in response to the Carrancististas nullifying the notes of Chihuahua the Departamento de Hacienda had ordered a general revalidation of all the notes in circulation, whether Chihuahua or Carrancista, as it was unjust to prejudice the interest of holdersAMP, .

In Chihuahua the military governor, Fidel Avila, following Villa's instructions, issued a decree on 31 March invalidating all the Carrancista currency except that which had been restamped by the state governmentPeriódico Oficial, 4 April 1915. At the same time Avila also, by decree núm. 77, prohibited the introduction into the state of any Carrancista notes, even if they were overstamped ‘REVALIDADO’Vida Nueva, 5 April 1915. As at this time the Villistas had not produced their own cartones but were using the Gobierno Constitucionalista issues, the consequent lack of fractional currency caused immediate hardships: some people were unable to buy provisions; others were put off trams for not having the exact fare. In an interview a few days later, Avila defended his decree but acknowledged that it had caused problems and stated that the existing fractional notes would be acceptable for a couple of daysEl Estado de Jalisco, 3 April 1915. In the meantime, the state government rushed ahead to print 5c and 10c cartones, to supplement the five centavo coins already in circulation, and these made their appearance around 12 AprilPrensa, 13 April 1915.

There are three different types of fractional notes that could have been issued at this time, namely the 5c and 10c sábanas dated 10 December 1913 and signed by Vargas and Chao; a variation of the 10c with the legend ‘Tesorería General del Estado’ within a scroll, and a series of 5c cartones.

Given the lack of small-denomination notes either the 5c and 10c sábanas were not issued until this time, and carried the earlier dateline and signatures since they were empowered by Villa's first decree and the similarity would inspire confidence, or had been issued earlier but in insufficient quantities. It should be noted that Villa appears as provisional governor and Chao as interventor. 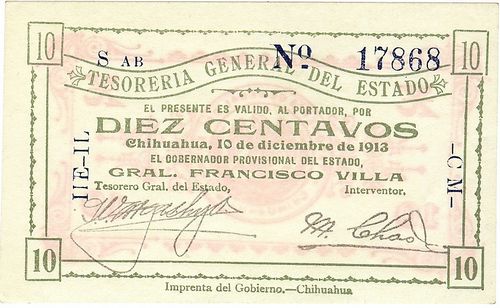 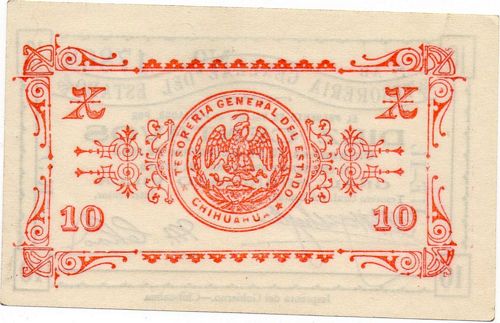 From its appearance and control codes the 10c sábanas with the legend ‘Tesorería General del Estado’ in a wavy scroll would appear to have been printed slightly later, at the same time as the blue 50c Estado de Chihuahua note, namely August to October 1915. These notes were printed on Bronco watermarked paper, as were the 25 centavos sábanas series CC and DD issued in June and July 1915. However, incongruously, Villa is still provisional governor and Chao interventor.

BA is probably an error for AB. 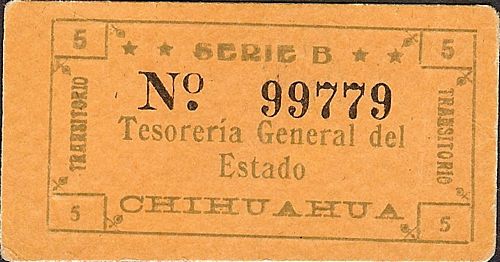 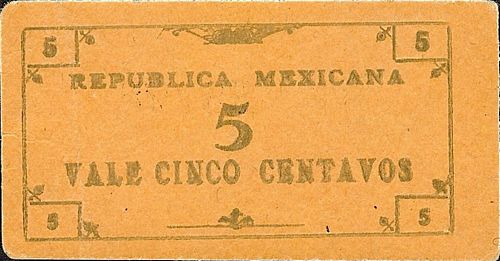 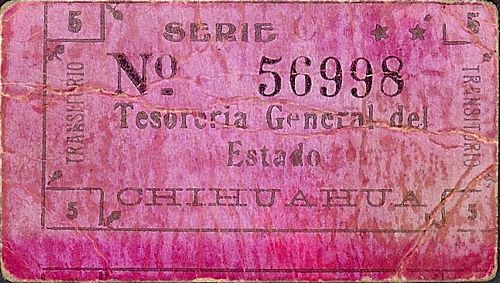 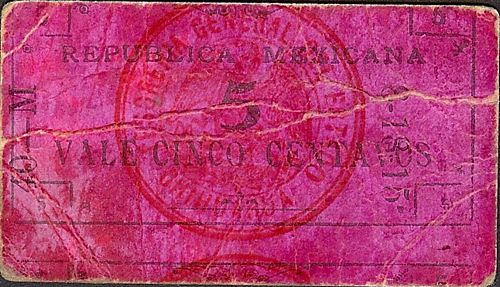 Finally, the 5c cartones are known in a variety of colours.

On 4 April 1915 the Presidente Municipal of Parral reported that the local branch of the Banco del Estado de Chihuahua was refusing to accept Carrancista notes unless they were revalidated. He asked Governor Fidel Avila for instructions on the matter and on the next day he was reporting that the news that Carrancista money was effectively banned had caused great alarm. On 7 April he was asking whether Ejército Constitucionalista notes and the 5c, 10c and 20c cartones were includedAMP, Gobierno, Jefatura Política y Presidencia Municipal, Libros Minutarios, AL12-13-000-103. By the next day he was able to inform the public that the government had decided that the cartones could continue circulating whilst it arranged its own cartones which would be available within a few days, and that the Ejército Constitucionalista were considered CarrancistaAMP, Gobieno, Jefatura Política y Presidencia Municipal, Libros Minutarios, AL12-13-000-109.

On 17 April the government sent $1,000 in 5c cartones to Parral, and on 4 May arranged to send another $1,000. However, neither consignment had arrived by 6 May. By 18 May they had arrived, but few exchanges had been made because businesses were proving difficult. By 27 May the Recaudación de Rentas still had not exchanged any cartones, refusing to accept the Carrancista ones. On 4 June the Presidente Municipal reported that the few cartones in existence (at most $5,000) were in the hands of the poor and asked whether they could be exchanged before their circulation was suspended. By 25 July he was reporting that the lack of small change was very critical and demanded that the Recaudación de Rentas put more into circulationAMP, Gobieno, Jefatura Política y Presidencia Municipal, Libros Minutarios, AL12-13-000-103

Some Convencionist Gobierno Provisional notes are known with Chihuahuan revalidations.