Circulation of other Constitutionalist issues

The Constitutionalist issues, such as the Gobierno Provisional de México notes, were used in the state and so the authorities relayed Carranza’s decrees and made other pronouncements.

On 22 September it was reported that contrary to rumours to date the government had not received any information about counterfeit $5 notes and so they were all good and of forced circulationEl Popular, Colima, Epoca Tercera, Núm. 60, 22 September 1914. On 30 September, as businesses were frequently refusing to accept certain notes, they were told that they were all good and that anyone refusing would be severely punishedEl Popular, Colima, Epoca Tercera, Núm. 67, 30 September 1914.

Some sábanas also reached the state. On 12 December 1914 the Governor, Miguel Orozco, issued a circular that people had until 25 December to present their sábanas in the Administración Principal del Timbre for revalidation. The offices would be open from 10.00 till 12.00 in the morning and 3.00 to 4.00 in the afternoonPeriódico Oficial, 19 December 1914. However, Carranza had already issued his decree nullifying the Chihuahua issues on 27 November and this was transmitted to the Interim Governor Esteban B. Calderón, via Zapotlán, and published in the Periódico Oficial of 28 DecemberPeriódico Oficial, 28 December 1914. Presumably the news will have been common knowledge before then, so there was a maximum of a few days, for three hours a day, when the known resello, ‘Administracion Principal de Timbre, Colima’, could have been applied. 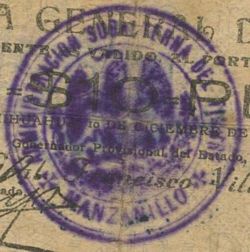 There is also a round (42mm) purple seal with ‘ADMINISTRACION SUBALTERNA DEL TIMBRE – MANZANILLO’ from Manzanillo, the main port of the state. This was probably used in December 1914, at the same time as the Colima resello above.

On 20 October 1915 the Presidente Municipal of Colima, Carlos G. Rosando, printed flyers outlining the procedure for the withdrawal of Gobierno Provisional de México notes, which had again been extendedAMCol, 61, exp. 3.