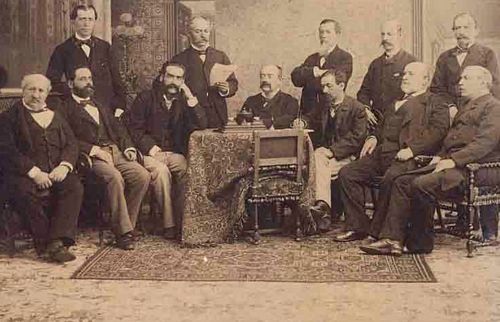 Faced with the prerogatives granted to the Banco Nacional Mexicano a group of Spanish-born businessman who controlled much of the wholesale textiles, tobacco and grocery business in Mexico City, led by Manuel Ibañez, convened a meeting on 29 August 1881, to consider establishing a national bank that would compete with the Banco Nacional Mexicano. The ensuing bank was authorised[text needed] by federal charter on 3 December 1881 and began operations on 27 March 1882The Two Republics, 30 March 1882. In the first few days various people had changed sizeable sums of hard cash for banknotesLa Voz de México, 2 April 1882.

The bank's notes were accepted in payment of federal taxes, in federal offices, and in payment of local taxes, in the states of Puebla, Oaxaca, Querétaro, San Luis Potosí, Veracruz, Guanajuato, México, Zacatecas and Durango, according to decrees of their legislatures.

The American Bank Note Company produced the following notes. They produced a special vignette of a statue of Columbus (C 139).

The ABNC reprinted one $1,000 note (A 1501) in April 1882 to replace a missing banknote at the bank's request. The original was then presented, untrimmed and with forged signatures, to the bank and the person arrested. It was thought to have been stolen in the Veracruz Customs HouseABNC letter F. G. Mead, agent, Mexico City to ABNC, 12 May 1884.

The bank opened branches in various states, having made agreements that gave it favourable tax treatment and regulated the use of its notes within the state. These notes had the name of the branch handwritten in  and also had a more visible overprint.

On 31 July 1882 José María SánchezBorn in Coahuila in 1850, Sánchez moved to Monterrey and became an employee of the business house of González Treviño y Compañía. When the brothers set up in Chihuahua in 1873 Sánchez moved with them though later he established his own business, selling clothes, groceries, glassware, crockery and spirits. When Terrazas took over the governorship in 1903, Sánchez became Treasurer General (Tesorero General) and later was substitute governor for Enrique Creel on various occasions. When the Maderista revolt broke out in 1910, President Díaz felt that it would be better if the governorship was in the hands of a Terrazas and Sánchez renounced in favour of Alberto Terrazas. He died in 1940. (representing the shareholders José and Jesús González Treviño) and Félix Francisco Maceyra, representing the Banco Mercantil Mexicano, were given permission to establish one or more branches and agencies of the bank within the state of Chihuahua. The branches' notes would be voluntarily accepted in all the state's offices, and by the public, for their face value in hard cash or with an 8% discount on the legal tender in use in the state (en pesos fuertes á la par ó con el 8 p% de cambio sobre la moneda legal que circule en el Estado)Periódico Oficial, 5 August 1882. The bank was given six months in which to establish at least one branch: otherwise the concession would lapse, which seems to have happened.

The state executive agreed a contract with Toribio Bracho, representing the bank, on 31 March 1882 La Voz de Mexico, 27 October 1882 and it was expected to open at the end of the yearEl Siglo Diez y Nueve, 30 October 1882.

The state government agreed a contract with the bank on 10 February 1882El Siglo Diez y Nueve, 13 May 1882 and the branch opened on 1 November 1882. Guanajuato. The Director was Esteban Quintanilla, and the consejo composed of Gregorio Jiménez, Eusebio González, Felipe Osante, Francisco de P. Castañeda and Pablo Orozco as vocales propietarios and Luis Goerne, Carlos Chico and Juan Caire as vocales suplentes.

On 2 August 1882, Francisco Ogarrio, representing the state of Yucatán, and José V. Collado, for the bank, agreed a contract to open a branch in Yucatán. The contract allowed the bank  to issue banknotes which would be accepted as legal tender in all payments to the state and municipalities with the bank obliged to redeem them in cash at the bank’s branch.  The contract was approved by the state’s Congress on 30 SeptemberEl Siglo Diez y Nueve, 25 October 1882; La Oposicion Radical, Año I, Tomo I, Núm. 98, 30 September 1882 but lapsed without a branch being established.

On 7 March 1882 the bank entered into a contract with the state of Coahuila to establish a branch in Saltillo and agencies in other towns. The government would accept the bank’s notes to the exclusion of any other bank which did not have branches and cashed its notes for hard currencyEl Siglo Diez y Nueve, 22 May 1882.

The project to establish a branch of Banco Mercantil Mexicano in San Luis Potosí had the support of the state governor, Pedro Díez Gutiérrez, who suggested it to the bank’s board of directors of the bank, through one of its members, on 22 May 1882AHBanamex, Banco Mercantil Mexicano, actas del Consejo de administración, 22 May 1882. The agreement was authorized by the local congress on 17 October 1882 and the contract for the concession celebrated between governor Pedro Díez Gutiérrez and Ramón C. Othón and Ignacio MurielASLP, Secretaría General de Gobierno, Colección Leyes y Decretos., 17 October 1882: Periódico Oficial, San Luis Potosí, 24 October 1882. Among the specifications it stipulated that if the state government decided to grant privileges to another bank they would be considered as granted as well to Banco Mercantil Mexicano, its branches and agencies, "with the exception of the one granted to the Banco Naconal Mexicano in relation to the banknotes of its branches being the only ones which are forcibly admitted to the offices of the State" according to the decree of 5 January 1882. The branches or agencies that Banco Mercantil Mexicano established in the state could put into circulation the banknotes that the head office sent them with the obligation to pay them on presentation in the office of the agencies or branches from where they came. The bank had to establish a branch or agency in the state within six months or the contract would be null and void. ASLP, Secretaría General de Gobierno, Colección Leyes y Decretos., 4 October 1882.

In July 1882 the state government authorised the bank to set up a branches in Tampico and elsewhereLa Patria, 26 July 1882.

In August 1882 the firm of Kimball y Albordi y sócios applied to establish a branch of the bank in ZacatecasLa Voz de Mexico, 3 August 1882. The following month the state Congress authorised a branch for a period of 25 years. In turn the bank would facilitate business transactions and grant a credit line to the state government[text needed]Periódico Oficial del Estado de Zacatecas, 16 September 1882.

The representatives nominated for the branch were Julián Ibargüengoitia, Ramón C. Ortiz and Antonio Gómez Castellanos, all shareholders. The branch had not opened by February 1883 as on 3 February governor Jesús Aréchiga extended the time-limit within which the branch should open by  another six months.