The Banco Nacional de México, obviously, was not pleased and instructed their Veracruz branch to stop accepting Banco de Londres y México notes. Not only was the bank worried about the proximate advantage the Banco de Londres y México gained from its new policy, but it also worried that this move might presage the loss of their monopoly over tax payments. They hoped that “if the situation can be maintained it will greatly help us counteract the intentions of said institution”references needed from Noel Mauer, The Power and the Money: The Mexican Financial System, 1876-1932.

By its decree núm 1142[text needed] the Aguascalientes state legislature authorised governor Carlos Sagredo to agree a contract[text needed] with Genaro Kimball, apoderado of the Banco de Londres y México, to establish one or more branches in the state. In return for the usual tax breaks the bank was obliged to put into circulation in the state the notes issued by its head offices in Mexico City. The contract was dated 17 July 1903contract published in El Republicano, 19 July 1903.

Kimball had been manager of the Aguascalientes branch of the Banco de Zacatecas but resigned in June 1903The Mexican Herald, 8 June 1903 to take over the proposed Banco de Londres y México branchEl Minero Mexicano, 25 June 1903.

The bank moved to new premises on the corner of 5a calle de la Constitución and 7a calle de la Pila (now calle Aquiles Serdán) in 1906.

Following Carranza's circular núm. 7 and the bank's failure to reopen its branch the Constitutionalists took over the branch at calle de la Constitución 72 and its annexe, at 7a calle de la Pila  92 in early 1914. On 23 February 1915 , their lawyer, Laureano Roncal, asked governor Saravia to restore the two propertiesADUR, Libro Copiador 298, Hacienda 23 February 1915 - 26 May 1915, p6.

The branch wasd established in 1888.

In May 1898 the local Legislature approved the contract to establish a branch in Monterrey. Its apoderado and first manager was Francisco Belden, an old associate of the Casa Milmo.

This branch operated until 1916, though it remained closed for almost all of 1913 to 1915, for fear of the Carrancista regime.

The first attempt to establish a bank in Michoacán was when the local congress on 31 May 1882 authorised governor Pudenciano Dorantes to organise with one of the existing banks in the capital to establish a branch or agency in Morelia but nothing came of this. Then on 25 June 1887 the governor, General Mariano Jiménez, agreed a contract with Santiago Wastall, representing the Banco de Londres y México y Sudamérica, to establish a branch[text needed] but this failed over the question of jurisdiction.

Finally, on 27 November 1897, half a year after the Ley general, the Banco de Londres y México finally established a branch at 2da calle Nacional núm 27, under a contract dated 26 June 1897[text needed] between the state executive and Iñigo Noriega, as apoderado for H. C. Waters, representing the bank. Article 4 of the contract stated that the bank only had an obligation to pay in Morelia the notes that the central office had sent for circulation in Michoacán, with the special overprint clear and easily visibleCoromina Amador, Recopilación de .leyes, decretos, reglamentos y circulares expedidas por el Estado de Michoacán. Morelia, Imprenta de la Escuela I. M. Porfirio Díaz, 1900. Tomo XXXIV.

The Banco de Londres y Sudamérica established a branch in 1864 under a concession to the business houses Velasco Hermanos and Nerón y Compañía.

The bank signed an agreement with the Puebla state government on 30 May 1887Periódico Oficial, 17 July 1887 to establish a branch in the city. Inter alia, it agreed that the bank only had to pay out in Puebla on the notes that the main office had sent for circulation within the state and marked with a special contraseña. State and municipal offices would accept the notes issued for Puebla at par. 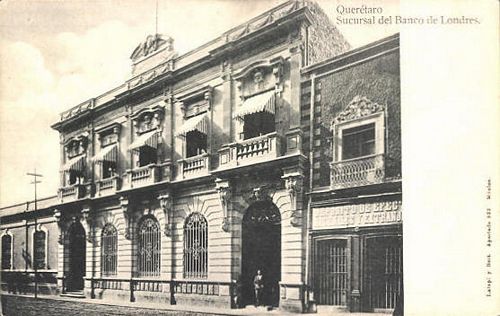 In April 1906 the bank was building offices for its branch on the north side of the Jardín ZeneaEl Popular, 10 April 1906.

The contract[text needed] between the governor, Díez Gutiérrez, and Santiago Wastall, for establishing a branch, was published in the Períodico Oficial on 1 February 1889 and approved by Congress on 13 April as decree núm. 76El Estandarte, 24 April 1889. It stated that only San Luis Potosí notes would be paid in the state. Banknotes from other places would not have the right to eimbursement on demand in San Luis Potosí (and vice versa) but exchange would require paying a percentage defined by the bankPeriódico Oficial, 24 April 1899; El Estandarte, 28 April 1889.

The branch was “located at the corner of the Custom House Plaza, one block from the postoffice and two blocks from the principal plaza in the city. The location is very good, for, in addition to what already has been said, it is in the direct route over which nearly every person will need to pass in going to and coming from the two railroad stations”The Two Republics, 19 May 1887. 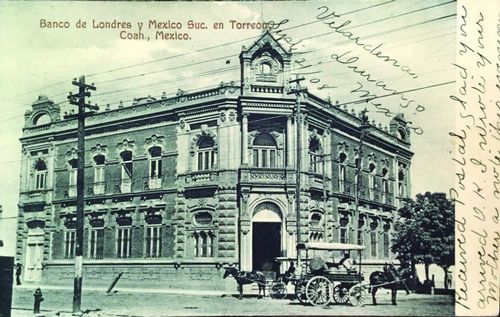 In [      ] the governor of Coahuila, Miguel Cárdenas de los Santos, granted Federico Howes, for the Banco de Londres y México, a concesión[text needed] to establish a branch in Torreón. The bank received exemptions for fifty years, on condition that it constructed a modern, functional building. The bank acquired a site on the north-east corner of the junction of avenida Hidalgo and calle Valdez Carrillo, a block from the Plaza de Armas. The building was completed in March 1902 and opened on 1 May, with the branch offices on the ground floor and the home of the manager, D. Motta, and his family above.
The building was demolished in 1952. 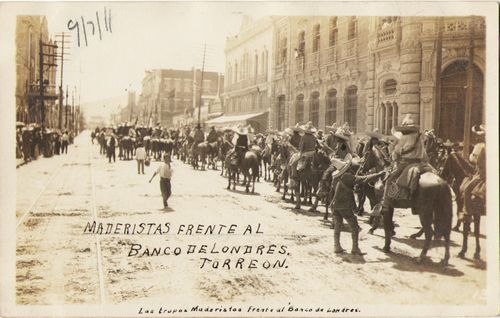 The Banco de Londres, México y Sudamérica had opened a branch in Veracruz in 1864.

In November 1887 the bank established an agreement[text needed] with Governor Enríquez about its branch in Veracruz. In this it was stipulated that the branch would be operating for a period of 30 years, exempt from taxes. The bank’s notes would be accepted in public offices, which gave it the opportunity to attract clients and funds as well as manage the public finances.