On 21 September 1821, the Army of the Three Guarantees (Ejército Trigarante), headed by its First Leader or Commander General Agustín de Iturbide, made its triumphal entry into the capital of New Spain, among the joyous shouts of the inhabitants, after three long centuries of Spanish domination and eleven years of incessant and heroic fight for liberty.

On 19 May 1822 Iturbide was proclaimed, by the Supreme Council in which resided the power, "Emperor of Mexico Agustín the First, by the Grace of God" and later, on 21 July of the same year, was crowned in pomp and splendour at the Mexico City cathedral with the growing enthusiasm of his followers: the conservative circles, the army and the populace.

A new government was named and very soon the cabinet had to face among other grave problems, the catastrophic economic situation through which the country was going as a result of hundreds of years of continued drainage of its mineral resources by the old regime; the bleeding that represented the high military expenses during the years of the War of Independence; the closing and abandonment of many mines motivated by an absurd, pernicious mining policy, especially in the last decades of the colonial government, as well as the destruction of others as a consequence of the military actions that took place mainly in the formerly rich mineral zones of the country; the remittance of great sums of money to Spain to support its wars against England first, and against the France of Napoleon later, and finally, the flight of Spanish capital to the Peninsula during the armed struggle.

All of that had obviously produced an incredible shortage of minted gold and silver as well as of the precious metals in bulk, which were indispensable for coinage. The sum of these factors forced the Minister of Finance Antonio de Medina, to request an authorization from the Supreme Council to issue paper money that, with character of "promise of payment", was granted. On 20 December 1822 a decree was issued authorizing the issue of cedulasGaceta Imperial de México, Tomo II, Núm. 152, 31 December 1822. The decree was slightly modified in January 1823 (Gaceta del Gobierno Imperial de México, Tomo I, Núm. 2, 4 January 1823): see Roxana Alvarez Nieves, Primer Experimento de Emisión de Papel Moneda en México, 1822-1823, UNAM, Mexico, September 1008, for the total amount of four million pesos, distributed in the following way:

The decree specified the form, design, text, paper quality, dates of issue and expiration, etc. In effect, they have the heading ‘EL IMPERIO MEXICANO’; are printed on one side only and their term for circulating is stipulated as beginning on 1 January 1823 and ending on 31 December of the same year; which means that their validity would be solely for one year. In the centre is the coat-of-arms approved by the Sovereign Provisional Junta on 21 November 1821 and in the lower part appear the signatures of Antonio de Medina, as Ministro de Hacienda, Antonio Batres as Tesorero General and Rafael Mangino as Contador General.

Circular of 21 December telling all the authorities, offices etc

On 23 December the Ministros de la Tesoreria General were instructed to nominate someone “de su entera confianza” to receive the seals, signatures and notes, and they chose [ ] Barquera. The same day a circular was sent to all the Intendentes to receive the money and begin accounts for the receipts, amortizations, remittances to the Tesorería General and ultimate incinerationAGN Hacienda Pública-Casa de Moneda, vol. 41, exp. 24, Extracto #1: CEHM Fondo VIII-4 Manuscritas de Román Beltrán, carpeta 10, leg. 447.

On 24 December the Oficial Mayor of the Escribania of the Tesorería General, general Mariano de Larraguibel, was commissioned to be in charge of distribution and “buen giro” of the paper (he remained in this post until the beginning of 1825)AGN Hacienda Pública-Casa de Moneda, vol. 41, exp. 24, Extracto #12: ibid. vol. 170. exp. 1: CEHM Fondo VIII-4 Manuscritas de Román Beltrán, carpeta 10, leg. 456.

On 9 January 1823 a new circular was sent to Intendentes asking them how much they needed. The Renta de Tabaco was also tod, separately, to amortizise only half of the notes that it received.AGN Hacienda Pública-Casa de Moneda, vol. 41, exp 24, Extracto #1: CEHM Fondo VIII-4 Manuscritas de Román Beltrán, carpeta 10, leg. 473.

A later clarification[text needed]Gaceta del Gobierno Imperial de México, Tomo I, Núm. 3, 7 January 1823 made known the system to be used for the gradual withdrawal of notes from circulation: the paper money that was received by the tax collection offices had to be cancelled in the presence of the interested party, by means of a diagonal cut in the left signature i.e. the one of the Ministro de Hacienda, in such a way that they could not go back into circulation, avoiding any possible frauds to the nation. In addition, the cancelled notes had to be sent periodically to the Finance Ministry, with the corresponding list for the purpose of their accumulation, control and final incineration.

The same local offices had the obligation of collecting and making null and void any bogus notes that were presented to them, by cancelling with non erasable ink, crossing these forgeries on their face.

In order to instruct the employees of the local Treasury Offices and the army paymasters all over the country in how to recognize the authentic and counterfeit they were sent samples without signatures or numbers in advance, which they had to return on receiving the valid and complete notes. 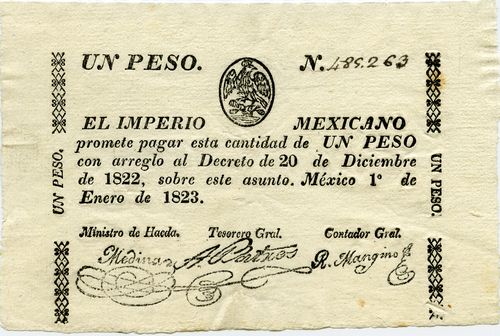 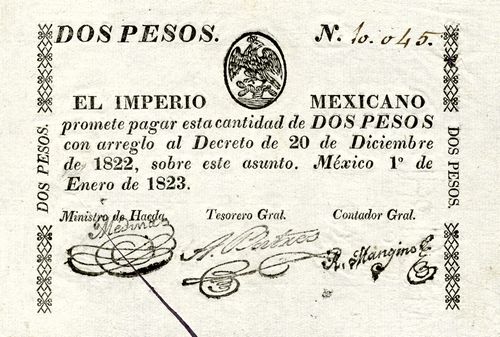 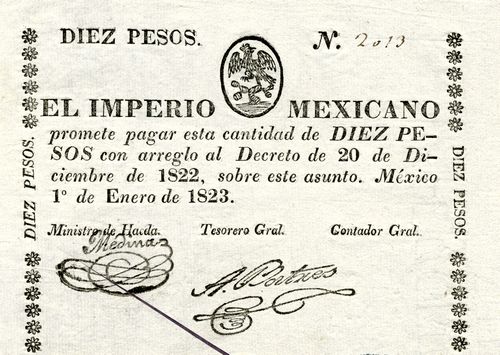 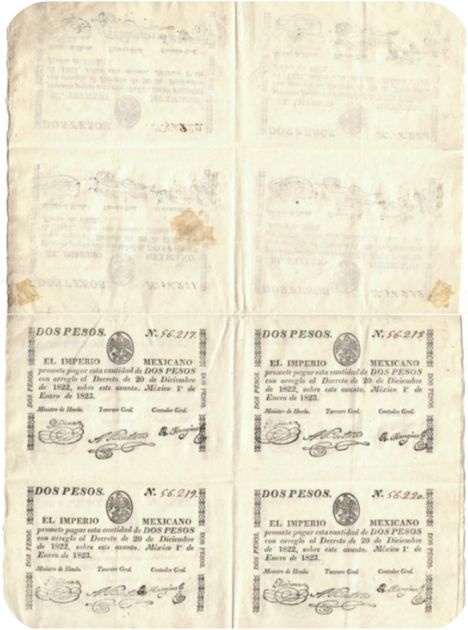 The notes were printed at the rate of eight at a time, in sheets of paper of 42.5 x 31 cms., white “medio floret” quality: four on one side with blank reverse and four on the other half, but on the opposite face of the paper, so they also have a blank reverse. Each sheet of paper had its corresponding watermark distributed between two halves: in one, the name of the manufacturer ‘JHP ROMUGOSA’ under the trademark of its mill: a medieval tower with a big entrance door, called Tower of the Guarros, and laurel leaves, and in the other simply ‘No 1o’, undoubtedly referring to the paper quality. This paper, of Spanish origin, was bought at the important wholesale-retail store "El Comercio de Mexico", owned by José Severo de Arana, and located at the Portal de las Flores, in the main square.

The sheets of eight, printed as described above were sent complete and uncut to the different Treasury Offices in the Empire and there, every time as needed, notes were cut at the approximate size of 10.5 x 16 cms. to put them individually into circulation.

The paper money was numbered by hand and had printed the corresponding signatures, although this impression was done in a separate operation after the text. So, when they left Mexico City, the sheets were signed and numbered ready to go to their destinations.

Anticipating a strong opposition to the paper money, the decree ordered their acceptance in all payments made to the government for various taxes (custom duties, excises, etc.), as 33% of the total amount of a payment, with the officers absolutely prohibited from collecting the whole exclusively in metallic money. The payment of wages to government employees and to the army would be made with a similar proportion, although this last order had to be modified very soon[text needed]AGN, Hacienda Pública - Casa de Moneda, vol. 41, exp. 24, extracto No. 12, undatedin view of the protest of the members of the army.

In fact, from the very first the notes were received with repugnance and distrust by all the social strata of the population and especially by merchants and military men (because army paymasters charged a high percentage for changing them into hard currency). They were also easy to counterfeit.

This paper money circulated practically in all the vast Empire that included New Spain with its provinces and the immense territories of the North, with the Californias, Texas, Arizona and New Mexico and in the south, Guatemala and all its provinces in Central America. Originally the only way to obtain notes was through daily transactions, but some businesses complained that this was too slow so on 23 January 1823 a commission of ‘hombres respetables’ was formed, from the main townsthese were Pablo Escandón, in Puebla, Francisco Venancio del Valle in Guadalajara; Rafael Leandro Echenique in Veracruz;. Rafael Bracho in Durango, Ignacio Villalobos in San Luis Potosí, Cayetano Gómez in Valladolid, Ignacio Goitia in Oaxaca, Manuel Fernández Carral in Zacatecas and. Juan Beistegui in Guanajuato who were periodically to be given amounts to put into circulationAGN Hacienda Pública-Casa de Moneda, vol. 41, exp 24, Extracto #3. The distribution was as followsCEHM, Fondo VIII-4 Manuscritas de Román Beltrán, carpeta 11, legajo 558:

Notes with a special seal in the shape of a red olive wreath, not numbered, circulated in the southeast of what is now the Mexican Republic and in the Central American countries. In the centre of the wreath they had printed, also in red ink, respectively: GUATEMALA (The Capitaincy General of Guatemala)[image, information needed] and LEON (The Department of León, Nicaragua). 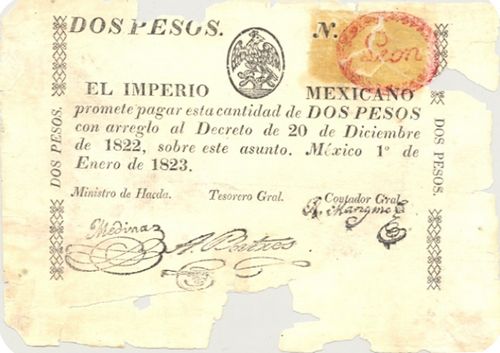 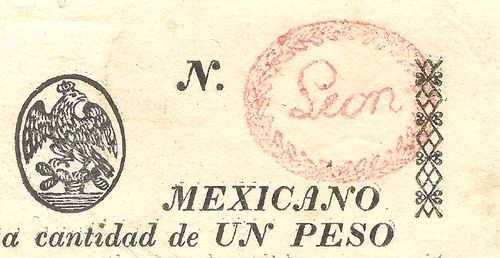 The majority of the known notes have been cancelled by means of a 2-inch long cut through the signature.

The issue was suspended after Iturbide was obliged to abdicate on 19 March 1823 and soon after forced to leave the country. The ephemeral Empire suddenly collapsed and the Congress ordered the complete destruction of printed notes and also of the remaining blank paper, as well as of the plates that had been used for their impression[text needed].

Congress issued orders[text needed] for calling in all the paper money that was in circulation or in the local government treasury offices in order that it be accumulated in one place and destroyed. They allowed only a thirty-day period for this to be done and naturally this was too short a time considering the great distances and inadequate transportation facilities of the period. Because of the protests and repeated requests for the extension of the deadline some notes were not remitted. In Oaxaca, to cite one case, perhaps due to a shift of administrative personnel or because papers were misplaced in the shuffle, a few notes of one and two pesos and some full sheets and half sheets of one peso denomination were "saved". Someone, perhaps a new administrator, found them and since there was no point in cancelling and returning them as provided for in the original decree, took the trouble to cancel them one by one writing on the reverse 'Inutilisado - Oaxaca 16 de Mayo de 1825' and signing with illegible initials Then they were filedinclude $1 48859-48866 (CNBanxico #1933). 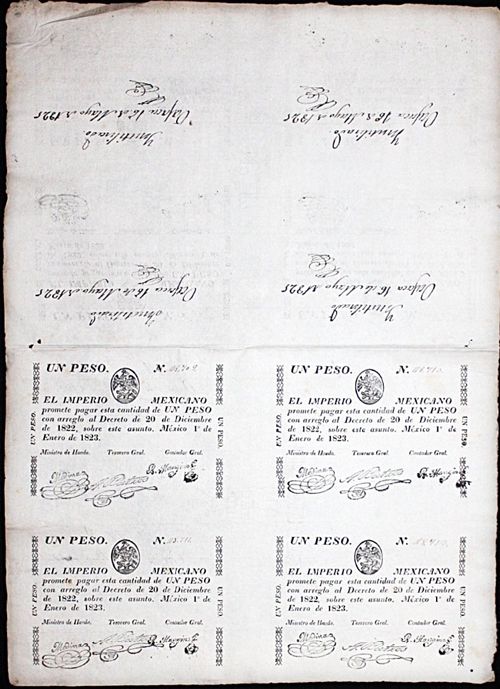 A great deal of controversy exists in regard to counterfeits. If they exist, they are very difficult to recognize because all are printed on original paper pertaining to the historical period of the First Empire of Mexico.

Iturbide was forced to abdicate and driven into exile in May 1823. The next year he attempted a come-back and on 11 May 1824 sailed from Southampton on the English vessel Spring. “Not only did the returning exile embark a printing press and many papers concerning his career, but also thousands of pesos of Mexican currency which had been struck off on red, white, and green paper"[                                        ]. Reference given to me by Clyde Hubbard.

Iturbide arrived at Soto la Marina, Tamaulipas on 14 July 1824. He was initially greeted enthusiastically, but soon after arrested, tried and sentenced to death. He was executed by firing squad on 19 July 1824.