Pedro Romero de Terreros arrived in New Spain in 1732. Wealthy but philanthropic, after many business successes he founded the Nacional Monte de Piedad on 25 February 1775, by royal decree of King Charles III dated 2 June 1774. The first building occupied by this institution was located on San Ildefonso Street and it subsequently was moved to the location it presently occupies at the northwest corner of the central plaza of Mexico City, which before the time of the conquest was the ancient Palace of Axayacatl, later occupied by the Aztec Emperor Moctezuma. 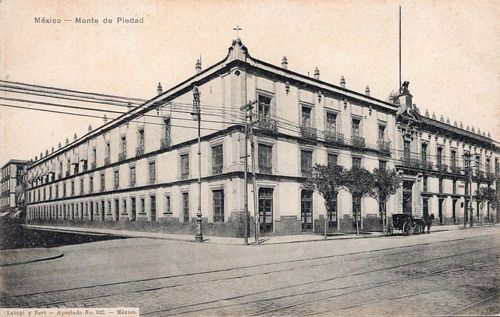 The Nacional Monte de Piedad grew in scope and by 1849 a banking department of deposits and savings had been opened paying an annual interest rate of 5% on savings. Later, it began to operate on an international scale placing money in accounts in European banking institutions.

On 6 September 1879 the Nacional Monte de Piedad was authorized to issue Certificados Confidenciales de Depósito (Confidential Certificates of Deposit) which were receipts used in commercial transactions and were made out to the bearer. In 1881 the Monte was granted the right to issue certificates as notes of voluntary circulation in the amount of 9,000,000 pesos.

The American Bank Note Company produced the following notes for the Nacional Monte de Piedad. It made vignettes of Pedro Romero de Terreros (C 19)Pedro Romero de Terreros was born in Cortegana, Spain in 1710 and died on the Hacienda of San Miguel Regla, Hidalgo in 1781. It is said that he became the wealthiest man of his times and enjoyed making donations to schools, convents and hospices. In 1776, Romero de Terreros made a gift of a warship with eighty cannons to Charles III. Because of his excellent service to the Monarchy, the King conferred upon him the title of Count of Santa Maria de Regla (1768) and gave to his second and third sons and their successors the titles of Marquis of San Francisco and Marquis of San Cristobal respectively (1776). for the faces and of the bank (C 56) for the reverses.

By 1882 difficult economic times and bad financial policies of the board of directors put the bank in a dangerous financial position. By 1884 the economic depression in Mexico became a crisis and the Monte could not redeem all notes presented for collection. The newly formed Banco Nacional de México took over the payment of 80% of the face value of these notes while the federal government agreed to accept the other 20% in payment of taxes.