A 30c note[image needed] from a barber's shop. The Baños de San Agustín, below the hotel, were the best in Mexico City (of course they were).

A 10c note[image needed] from another barber's shop, at Gante 1, run by Fructuoso Vallecillo. 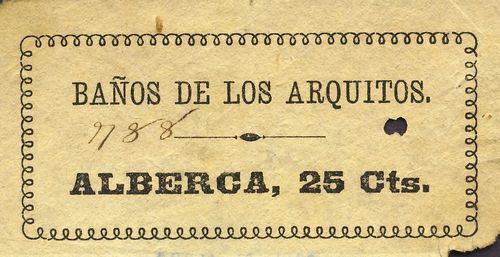 Presumably named after the famous Baños de los Arquitos in Aguascalientes, constructed in 1821. 'Alberca' is the swimming pool.

This bathouse with all the latest luxuries and conveniences was opened in February 1885Le Trait d'Union, 31 January 1885 at 2a calle del Factor 6. A 5c vale from this bathhouse was included in Casasola's expositionhttps://mediateca.inah.gob.mx/repositorio/islandora/object/fotografia%3A191511. 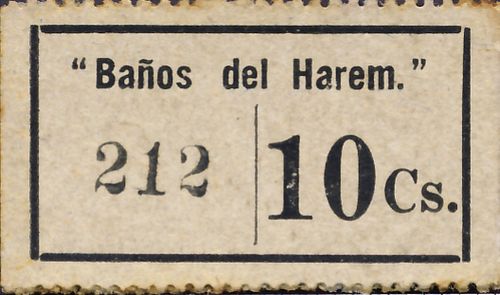 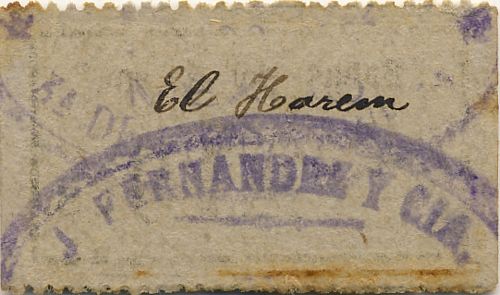 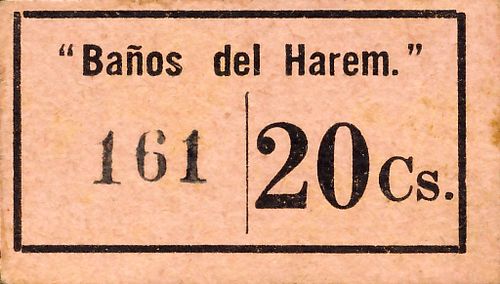 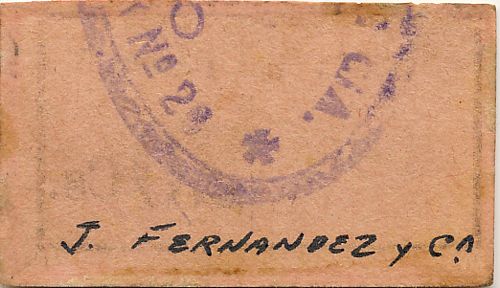 This bathhouse was situated at calle de Venero 538 and San Felipe 17 and 18. In August 1888 it had been acquired and renovated by Amado García, the founder of the Baños de la CoronaEl Monitor Republicano, 13 October 1888.

This boleto states that it is accepted in the baths' barbershop. 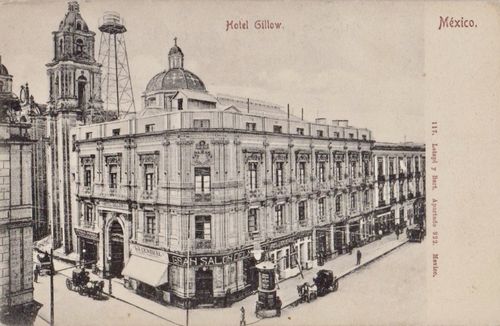 This pool hall was set up in early 1911 in the basement of the hotel of the same name, with entrances on Avenida Isabel la Católica and Avenida 5 de MayoEl Imparcial, 7 March 1911. It was run by Santoyo Picazo y Cía. 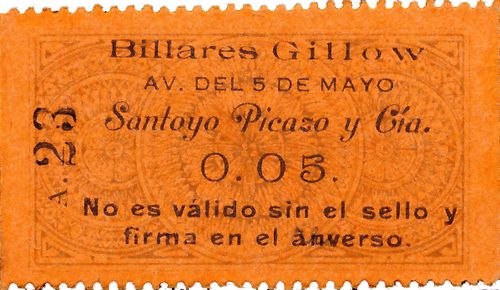 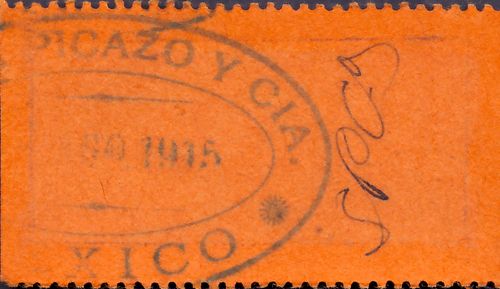 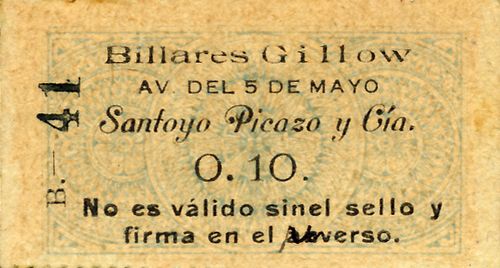 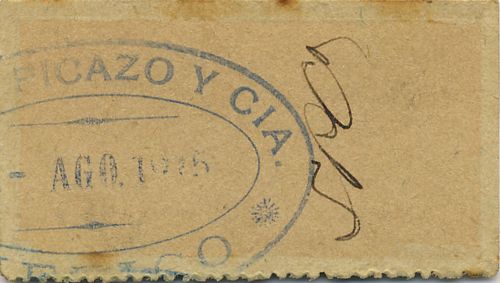 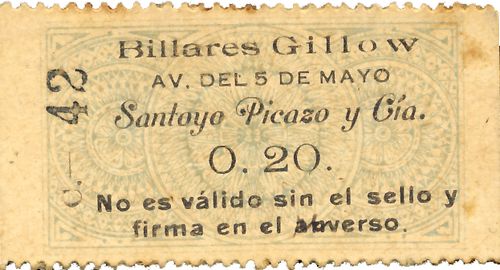 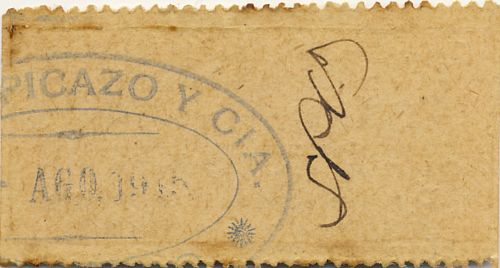 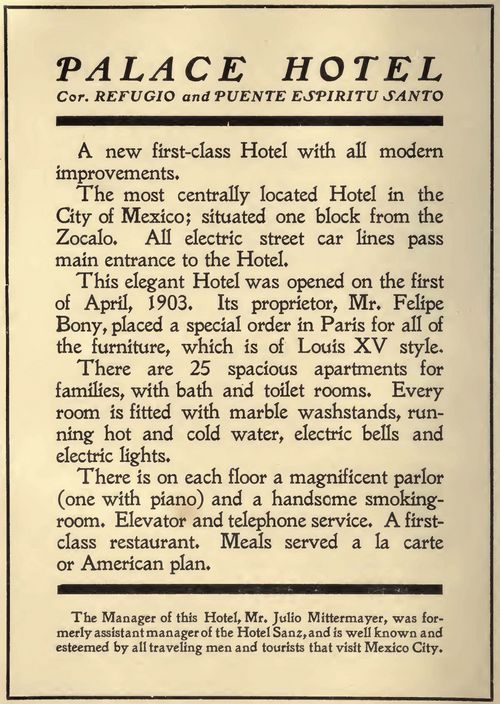 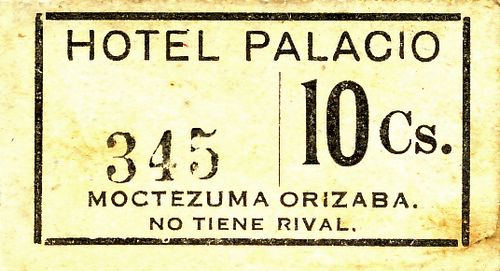 The Moctezuma Orizaba, that has no rivals, is a beer. 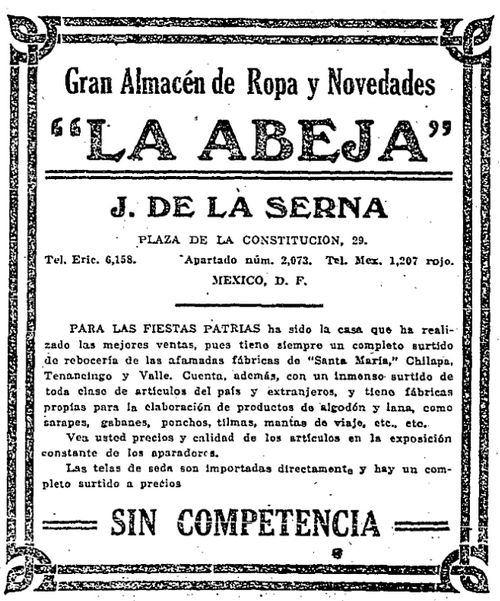 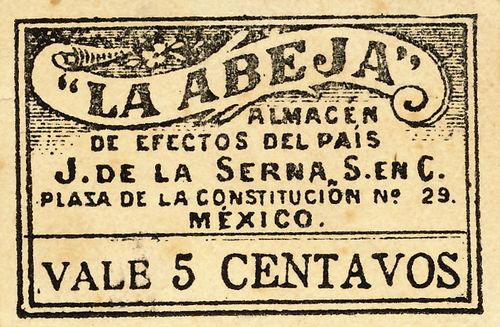 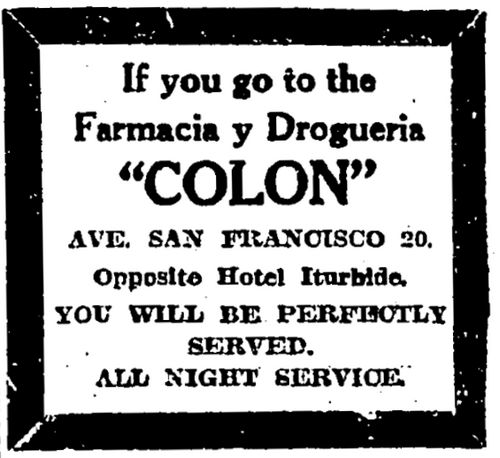 The new Colon drugstore, situated at Avenida de San Francisco núm. 20 and owned by the firm of Parra y Cía., “fitted with every luxury and to the most demanding needs of modern pharmacopoeia”, was opened on 1 November 1913El Correo Español, 30 October 1913.

A 10c note[image needed] from a store located at Palma and 5 de Mayo. 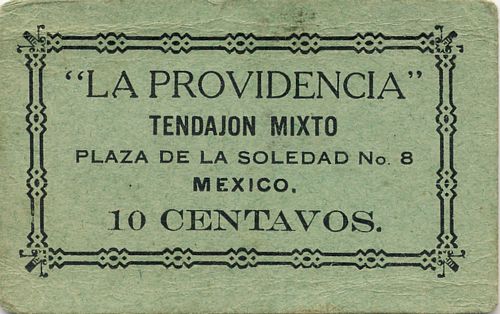 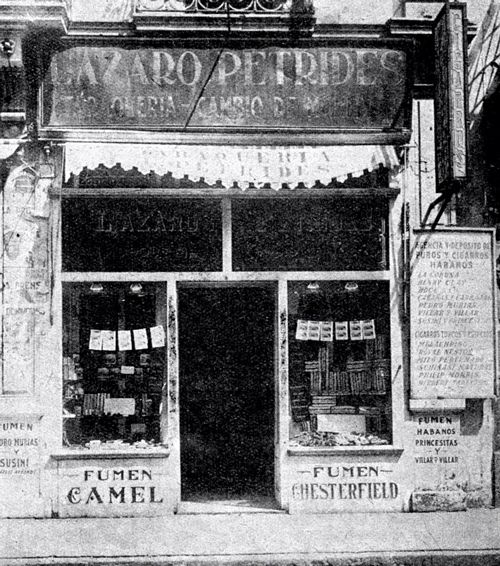 In 1875 Lázaro Petrides, a Cypriot immigrant, opened the first cigar and cigar shop in Mexico. It soon became a must-see stopover for connoisseurs, and even Pancho Villa himself, they say, ordered his cigars here. Petrides had also moved into money changing by May 1915The Mexican Herald, 3 May 1915 and received a licence as a casa de cambio. On 22 January 1916 he was also appointed managing director and treasurer of the newly-founded Compañía Petrolifera “El Verjel”, S. A. which had a capital of $1,500,000El Pueblo, 13 February 1916. 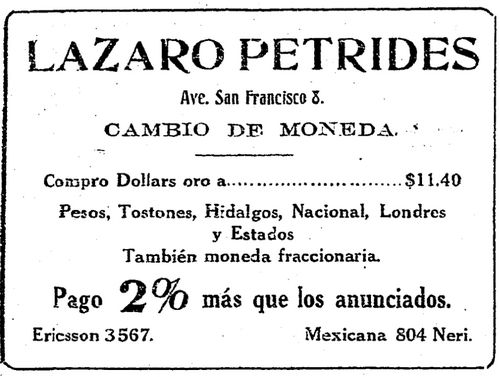 Petrides’ business closed and his descendants emigrated to the United States, but his brothers and nephews, who arrived in Mexico fleeing the war in Europe in 1939, also opened a shop, Hermanos Petrides, in calle de Uruguay, which continues the tradition and is still an essential stop for heavy cigar smokers. 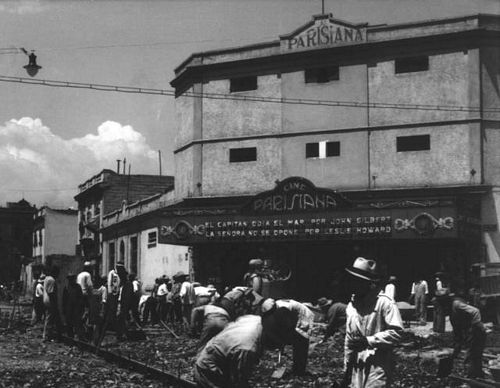 A cinema located at 5a Limantour (later calle Abraham González) and 2a Barcelona. It was remodelled in 1941 and was still open in 1955 but had closed by 1971. The building was later demolished and replaced with an apartment building that was destroyed in the 1985 earthquake.

Again, these seem unlikely, but confirmation comes from the fact that they were included in a display of vales photographed by Casasola in c. 1914https://mediateca.inah.gob.mx/repositorio/islandora/object/fotografia%3A191511. 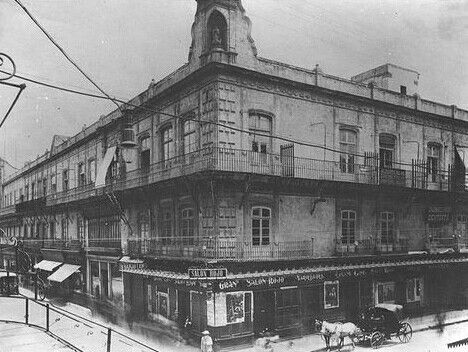 Jacob(o) Granat was born in 1871 in Lemberg (today Lviv), a city in Western Ukraine, at the time part of the Austrian empire. In 1900, at the invitation of his uncle Jacob Kalt, he moved to Veracruz, and a year later to Mexico City. Granat quickly became the “curio king” of the capital, selling luggages, post cards and other souvenirs from his shop in calle San Francisco.

In 1906, Granat sold his shop to purchase the old Borda palace, on the corner of Madero and Bolivar, where he opened the first movie theatre of the city, the famous Salón Rojo. Salón Rojo rapidly became the most luxurious and successful theatre in the city, and a centre of night life for Mexico’s rich and famous. It attracted politicians, notably Francisco Madero, who used to hold political meetings in Salón Rojo, and became a friend for Granat.

in the mid 1920s, Granat sold the Salón Rojo and moved back to Europe, settling in Austria. One of the reasons for his departure was the disappointment and sadness caused by the Madero’s dismissal and assassination. Apparently, he tried to move back to Mexico after the Nazi invasion of Austria, but could not, or was not allowed, to travel, and he and his wife were sent to Auschwitz, where they died in the gas chamber in 1943.

We know of a 20c note[image needed] from the Salón.