The Arrieta brothers, from the Sierra Madre of Durango, were among the first to take up arms in 1910 in support of Francisco Madero. Then after Huerta’s coup d’état in February 1913 they rebelled again. On 18 June their forces captured the city of Durango, and installed Pastor Rouaix as provisional governor. Domingo Arrieta met with Carranza in Durango in August 1913, and was appointed a General and Comandante Militar of the state.

In January 1914 Pastor Rouaix wrote to Carranza complaining about the difficulties that Arrieta was causing and to ask Carranza to resolve the problem. He said that Arrieta was printing $1,000,000 in bonos. He had tried to convince him of the damage that would be done to business and to government if military jefes issued paper currency without any backing. Rouaix had told Arrieta that he (Rouaix) had Carranza’s permission to issue notes and was already engraving the plates, and he offered to give Arrieta whatever sum he needed for his expenses. Arrieta said that he had had problems receiving funds but Rouaix claimed that the government had always paid and the fault lay with the fact that Arrieta’s brigade did not have a paymaster or keep books. Rouaix asked Carranza to order Arrieta to suspend his issue, and to decide the amount that the government should pay daily to meet his expensesABarragán, caja IV, exp. 31, f.58-72.

So Arrieta's first attempt was probably an issue under the title of Jefatura de Hacienda del Eército Consitucionalista. 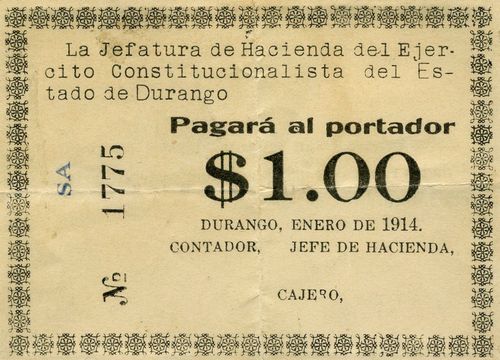 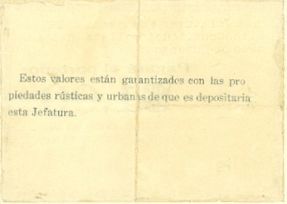 The example illustrated is unsigned but has space for the signatures of the Contador, Jefe de Hacienda and Cajero and on the reverse the claim that the issues is backed by confiscated properties (Estos valores están garantizados con las propiedades rústicas y urbanas de que es depositaria esta Jefatura). The fact that these notes (a) have a simple design comparable to the first Estado de Durango notes, (b) were Series A (abbreviated to 'SA') and that a later Arrieta $1 issue was Series B (SA), and (c) do not appear to have been issued all suggests that they were an unfulfilled Arrieta project.

On 9 March 1914 Francisco Rios Laurenzana told Domingo Arrieta that the government did not have the necessary guarantee for the first issue of more than $200,000 so could not give his brigade what it needed for its expensesADUR, Libro Copiador 267, Hacienda 11 July 1913 - 25 April 1914, p849.

Domingo Arrieta took over as provisional governor from Pastor Rouaix on 14 August 1914. That month there was another issue of $5 and $50 notes, with the same design as Pastor Rouaix's issue and with Carranza’s authorization still on the reverse, but with the signatures of Arrieta as governor, Juan B. Fuentes as secretary and José Clark as Director General de Rentas.

On 22 September Carranza authorized Arrieta to issue up to another(?) million pesos for the forces under his commandPeriódico Oficial, Durango, Tomo XXXIX, Núm. 14, 27 September 1914. In a later telegram to CarranzaCEHM, Fondo XXI-4, telegram Arrieta to Carranza 13 January 1916. The telegram actually list 10,000 $5 notes valued at $500,000, but this is just a typo. Figures confirmed in a telegram from A. Gaxiola D., Durango, to Villarreal, Mexico City, on 21 December 1914 (ADUR, Libro Copiador 278, Telegramas 13 August 1914 - 23 April 1915, p269) Arrieta acknowledged that he had issued the following amounts (figure in telegram corrected):

The Villista Severino Ceniceros officially took over as Comandante Militar and Gobernador on 29 September but even the day before he had announced that while Arrieta's $5 series E and $50 Series A were valid and of forced circulation, his $5 Series F were not, since they had not been authorisedPeriódico Oficial, Durango, Tomo XXXIX, Núm. 15, 8 October 1914. So there were series F notes before December (below).

The codes (at least for the $5 notes) repeated themselves in batches. Known codes are:

On 7 October 1914 the Secretario Interino, Antonio Gaxiola, told the Jefe Político of Cuencamé that the bonos were of forced circulation except for Series FADUR, Libro Copiador 278, Telegramas 13 August 1914 - 23 April 1915, p48.

In November 1914 Zacatecas included in its list of forced issues the $5 Series E and $50 Series A, issued in August and a similar pronouncement was made in San Luis Potosí.  However, by mid December 1914 businesses in Durango were refusing Arrieta’s $5 notesLa Voz de la Revolución, Tomo 1, Núm. 15, 11 December 1914. By this time Arrieta had been forced out of the capital, so two other issues cannot be definitely located as to time and place. The first was four similar denominations (50c, $1, $5 and $10), Series F, dated December 1914, ordered through General Enrique Nájera and printed by the firm of J. M. Iguiniz of Guadalajara, Jalisco.

Known code is a vertical D.S.O on some denominations.

In a later telegram to CarranzaCEHM, Fondo XXI-4, telegram Arrieta to Carranza 13 January 1916 Arrieta acknowledged that he had issued the following amounts:

In early January 1915, Arrieta presented to Carranza a very dramatic economic situation and according to the transcripts of the telegrams a handwritten note was included with what was probably another authorization from Carranza to issue one more million pesosCEHM, Fondo XXI-4, telegram dated 31 January 1915.

On 1 December 1914 the Chihuahua government prohibited Arrieta’s notes but when Emiliano G. Saravia consulted Villa he was told that this was due to a misinterpretationLa Voz de la Revolución, Tomo 1, Núm. 17, 18 December 1914 The article wrongly suggests that all Arrieta notes were of forced circulation.. Only the Series F were invalid, as unauthorised, but a fortnight later Villa said that he was merely thinking of withdrawing the notes and replacing them with notes of other issues, so Saravia declared the notes still of forced circulationPeriódico Oficial, Durango, Tomo XXIX, Núm. 25, 20 December 1914 and on 14 February 1915 a Durango newspaper had been assured by a government employee that the 50c notes were of forced circulation, even though they were being refusedLa Voz de la Revolución, Tomo 1, Núm. 42, 14 February 1915. On 26 February the same newspaper reported that Arrieta, who still considered himself governor, had made the later issue, which was only good amongst the troops under his command. To forewarn the public it described the differences (date, printer’s imprint, etc) though Arrieta used the same templateLa Voz de la Revolución, Tomo I, Núm. 47, 26 February 1915.

So these Arrieta notes, which were so similar to the earlier Pastor Rouaix notes, entered a sort of legal limbo when Arrieta was driven out by the Villista forces.