On 12 December 1913 Pastor Rouaix issued a complicated decree authorising the creation of state bonds. It noted that it would be difficult, given economic conditions, to raise more taxes; that many taxes were unpaid, and that if these were not paid, the government could seize assets and issue bonds, with a 10% interest, guaranteeed by the rights over such assets (derechos reales). The total amount of bonds issued would be determined by the value of the assets.

The next day Pastor Rouaix issued a decree that made the bonds issued by the government and by Constitutionalist forces authorized by it of forced circulation throughout the state, under the threat of a fine¡Patria Libre!, Primera Epoca, Tomo 1, Núm. 22, 18 December 1913; Periódico Oficial, Durango,Tomo XXXVIII, Núm. 36, 21 December 1913.

These were issued in accordance with the decree of 12 December 1913. They were to carry an annual interest of 6%, and guaranteed by rights over real estate, as stated on their reverse. They bore a single signature, that of del Real Alfaro. 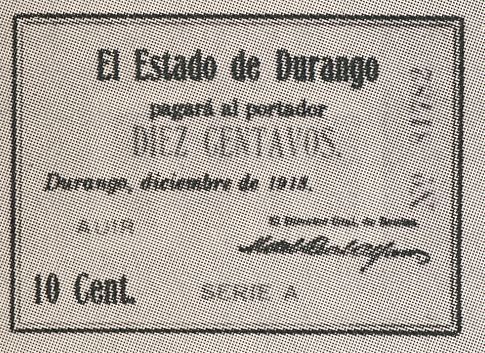 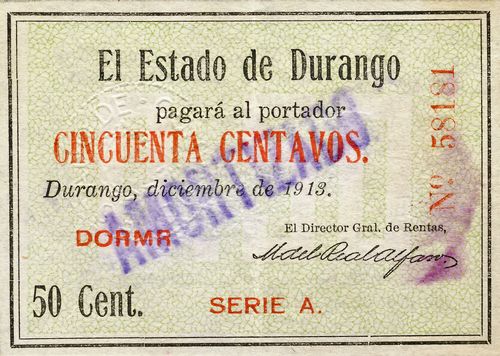 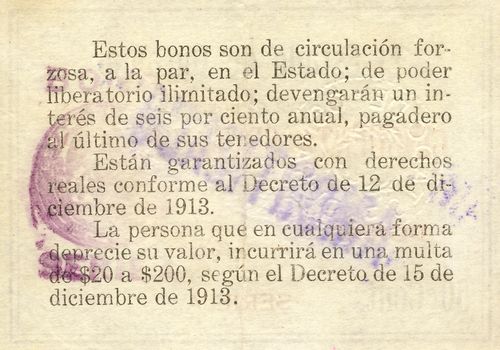 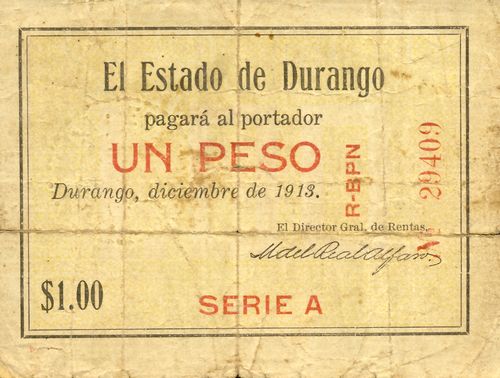 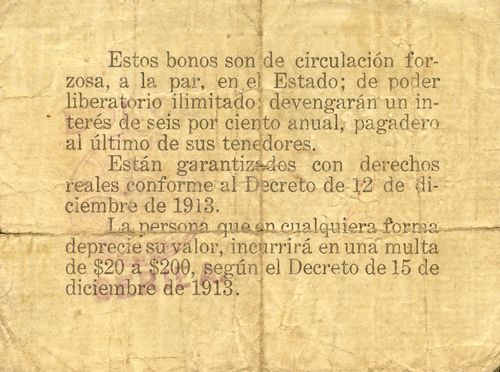 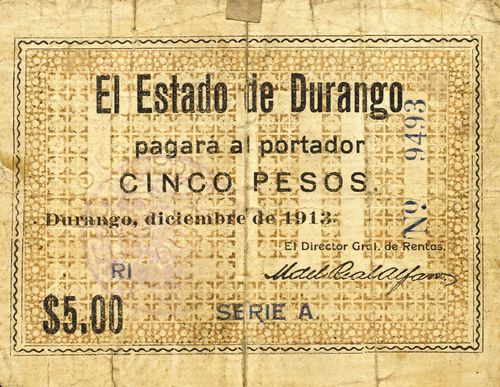 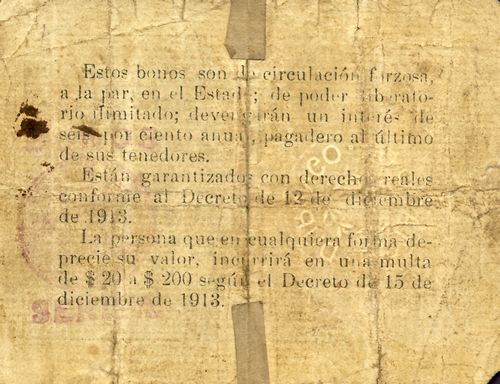 These notes have red code letters. 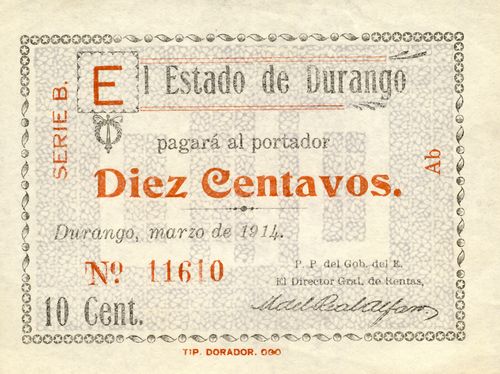 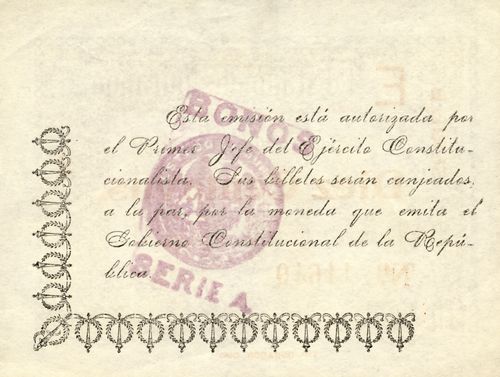 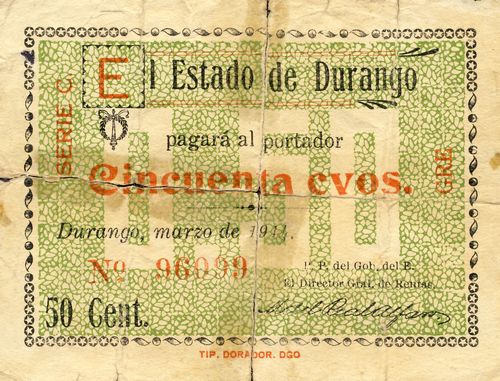 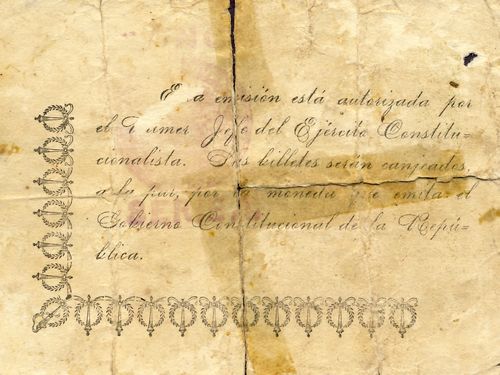 Obviously more fractional notes were needed as 10c and 50c notes were issued in March 1914, though a newspaper reports says that few 10c notes were issued and people did not expect change when they tendered a $1 note. The Director General was now signing per pro the state government, and on the reverse it stated that these notes were authorized by the Primer Jefe of the Ejército Constitucionalista and would be changed at par for the coins that the Constitutionalist Government would issue. These were produced by the local firm of Silvestre DoradorSilvestre Dorador was born in 1871, in Aguascalientes, but always considered himself Duranguense. In his youth he learned the trade of bookbinder and then established a workshop of his own, and in 1897 he founded a printing press that soon acquired a large clientele. He was a major advocate for the formation of the co-operative societies of artisans and workers, which gave him a great esteem among the popular classes. At the beginning of Madero’s revolution he joined the movement and was elected municipal president of Durango in 1912, dedicating himself especially to the foundation of a colony for workers. In April 1913, when the revolutionaries were repulsed, he was accused of complicity with them and was sent to the penitentiary together with his sons and the most notorious Maderistas. When Durango was taken in June, he collaborated with Pastor Rouaix as Municipal President in the capital, and when Rouaix went to Mexico City to run the Secretaría de Industria y Comercio, Dorador was entrusted with the direction of its printing press, the most important that the Federal Government had.
Subsequently, he was elected deputy to the Constituent Congress for the district of Durango, where he collaborated in the drafting of articles 27 and 123 of the Constitution. He was later a deputy to the local Congress, author of the state’s Labour Law (Ley de Trabajo), Municipal President, again, and federal deputy from 1926 to 1928 and, finally, he returned to be a deputy to the local Legislature, in the period of General Amaya. He wrote a work entitled Mi Prisión, in which he exposed the events that motivated him. He died on 16 November 1930.. 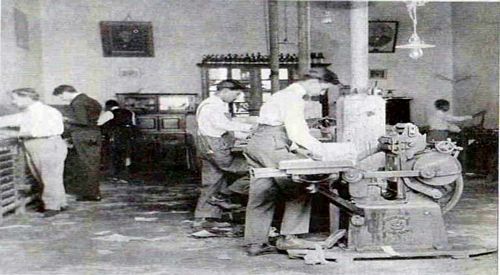 On 2 June Carranza, while in Durango, authorised Pastor Rouaix to issue $1,500,000, in addition to the $1,000,000 already issued with his approval. Then on 24 June, by which time he had moved on to Saltillo, Carranza confirmed his authorization to Durango to issue up to $2,000,000 in vales. These were to be of forced circulation throughout the Constitutionalist territory.