Private issues (Gómez Palacio and the rest of Durango) 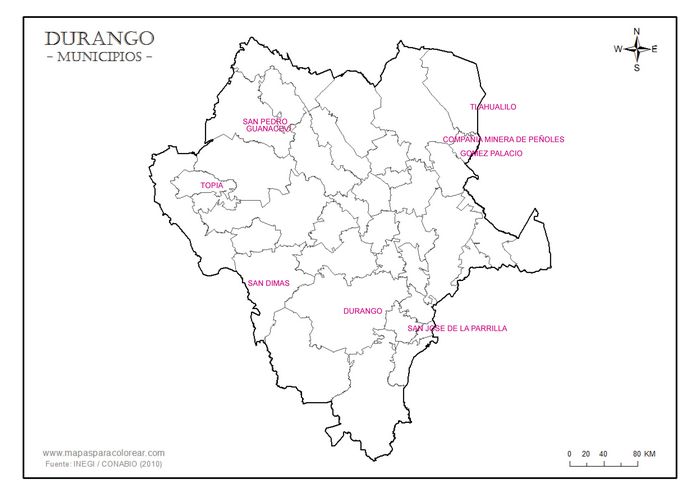 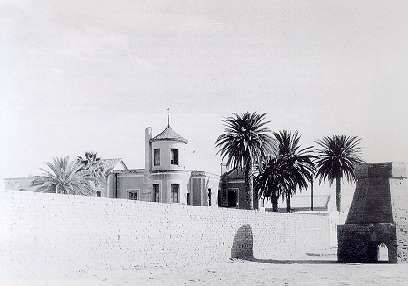 The Compañía Agrícola del Tlahualilo was founded on 14 August 1885 and in 1903, after four years of complicated litigation, was taken over by a group of American and British capitalists. 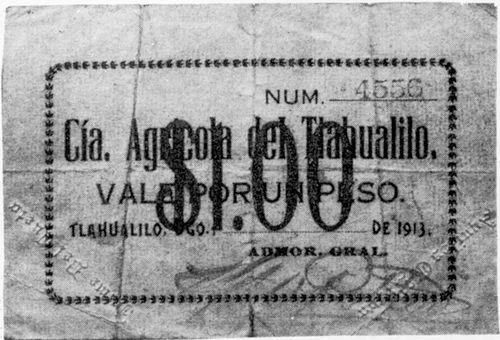 On 31 August 1913 it was reported that General Domingo B. Yuriar had met with the principal companies in the Laguna Comarca and would make an issue of $100,000 in bonos, to meet his costs. The issue would be fully guaranteed and circulate freelyEl Demócrata, Segunda Época, Tomo II, Núm. 6, 31 August 1913. 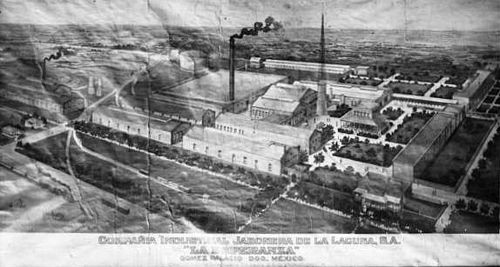 In December 1888 Juan Terrazas and John F. Brittingham teamed up to form a candle and soap production company with a capital of $14,000. Soon after they moved to Gómez Palacio, at the centre of cotton production, where Terrazas and Brittingham partnered with Francisco Belden, owner of the La Esperanza soap factory, as well as other capitalists based in the city of Monterrey, increasing the share capital to two and a half million pesos. They bought the factories La Alianza and La Favorita, of Torreón and San Pedro de las Colonias.

The Compañía Industrial Jabonera was organized in 1898 by the Terrazas-family, Juan Brittingham, a North American, and Tomás Mendrichaga, a Monterrey industrialist, landowner, and president of the Banco Mercantil de Monterrey, as a cooperative venture joining the interests of cottonseed producers and processors. The company manufactured cottonseed soap, and, most important, glycerine, a key element in high explosives. Although after 1902 a bitter dispute arose between the cotton planters and the company over the low prices paid for seed, the Jabonera was typical of Enrique Creel's ambitious efforts to coordinate the business activities of various regional elites and to extend his family's economic empire beyond the borders of Chihuahua.

The Compañía Industrial Jabonera was intrinsically connected with the Compañía Nacional Mexicana de Dinamita y Explosiva, which epitomized the profitable combination of regional, national, and foreign interests and the importance of political influence during the Diaz era. It was established in 1902 in the Hacienda de Noé, Mapimí by the Terrazas-Creels, Brittingham, the Financiera por la Industria en México (a consortium of Mexico City investors), and the Societe Centrale de Dynamite of France. The company obtained a concession to manufacture dynamite in Mexico. With the cooperation of the Mexican government (the sons of both Porfirio Díaz, jr., the son of the President, and Julio L. Limantour, the son of Finance Secretary José Y. Limantour, were on the board of directors) which raised the tariff on imported explosives and exempted the company from all import duties, the new trust acquired a monopoly on dynamite sales. The Terrazas-Creels profited doubly by selling glycerine from their Jabonera operation at high prices to the dynamite monopoly and then selling dynamite at high prices to desperate mine owners. Despite its obviously detrimental effect on the mining industry, the powerful trust operated unchecked. 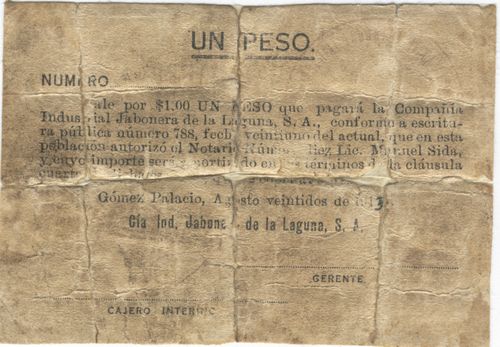 These notes were signed by the gerente and cajero interino. 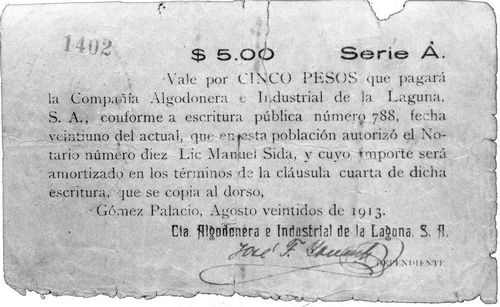 At the end of the 19th century the sons of Santiago Lavín formed the company Santiago Lavín Sucesores, which in 1907 changed its name to the Compañía Algodonera e Industrial de La Laguna, S. A. The company’s objects were the exploitation of its farms and the implementation and development of all kinds of industries and companies connected to agriculture (la explotación en todos sus ramos de las fincas rústicas que son propiedad de los socios y la implantación y desarrollo de toda clase de industrias y empresas inherentes y anexas á la agricultura) and it owned a number of haciendas. Between 1898-1910 the Lavín were involved with some of the most important industrial and financial projects in the region. However, the family business began to have serious difficulties, management problems and excessive indebtedness that led it, on the eve of the Revolution, to a state of virtual bankruptcy. The picture was aggravated when the youngest brother, Pablo Lavín, ended up joining the rebel forces.

These notes were authorised in the same escritura pública núm. 788 of 21 August as the Compañía Industrial Jabonera notes above They are signed by José F. [                      ][identification needed] as Dependiente.

In February 1914, following Rios Larenzana’s instructions, the jefe político of Durango, Silvestre Dorador, prohibited companies[text needed] from issuing paper money or tarjetas de valor. He gave them 15 days to withdraw their issues or face punishment under the law¡Patria Libre!, Tomo II, Núm. 20, 17 February 1914. Ironically, Dorador was a printer and so might have produced some of these vales.

On 24 April Pastor Rouaix told Coronel Manuel Madinabeitia, Villa’s Jefe del Estado Mayor in Torreón, that as the notes of the Cía. Industrial Jabonera de la Laguna and of the Cía. Algodonera were been accepted with difficulty it would be convenient to withdraw them, exchanging them for soap or wheatADUR, Libro Copiador 267, Hacienda 11 July 1913 - 25 April 1914, p987. A few days later a newspaper reported that, because of the depreciation of these two companies' notes, the government had arranged with the Jefatura de Armas in Torreón to redeem them, for the account of the state, in the Dirección General de Rentas in Torreón and in the Recaudación in Lerdo. The companies would honour the redeemed notes with soap and wheatEl Demócrata, Segunda Época, Tomo II, Núm.95, 29 April 1914. 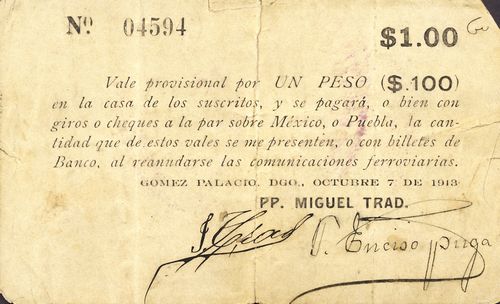 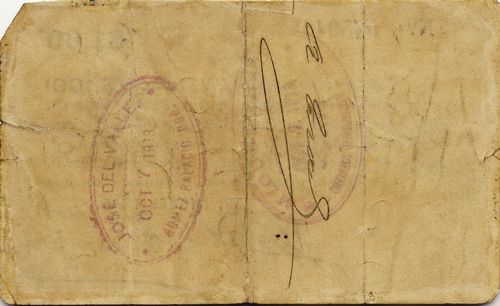 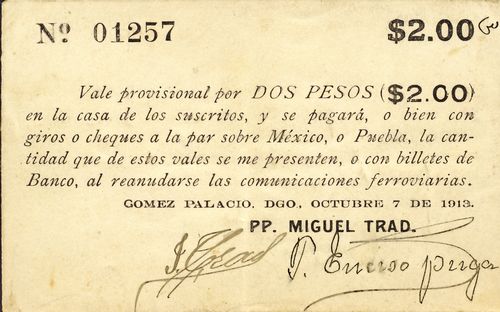 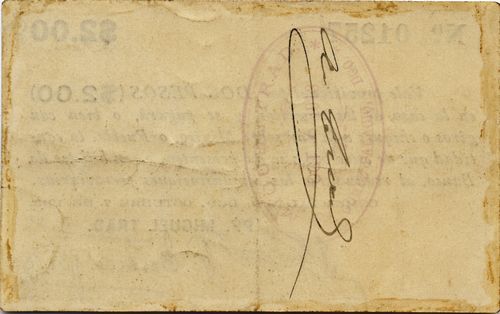 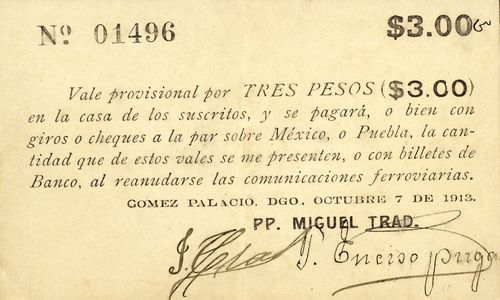 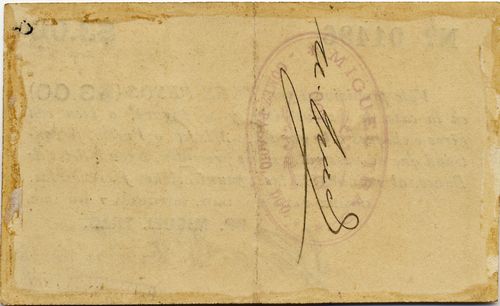 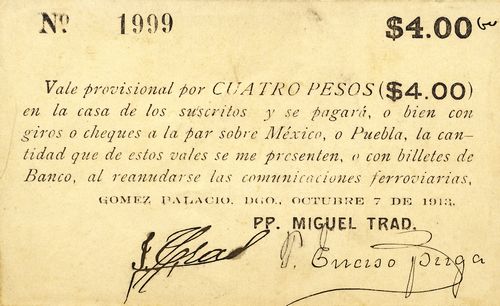 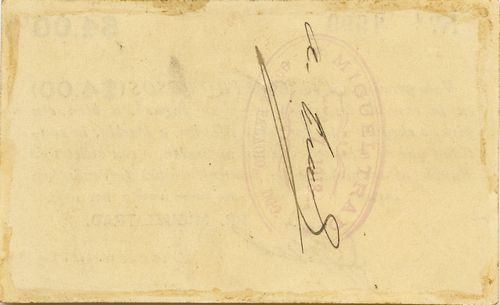 On 2 March 1914 representatives of the workers at the Minas de Candelaria in San Dimas complained to the Jefe Político, Rodolfo Salcido, that the company had been told by the government to withdraw the vales[images needed] with which it was paying workersADUR, Fondo Secretaria General de Gobierno (Siglo XX), Sección 6 Gobierno, Serie 6.7 Correspondencia, caja 7, nombre 12.