The Guanajuato Consolidated Mining and Milling Company was incorporated in Colorado in 1898 with a capital of three million US dollars to take over and work the Sirena mine, situated on the Veta Madre of Guanajuato. The company gradually and persistently purchased additional property until, by 1906, it owned at least six times the area of mining property that it originally possessed. It also owned 10 per cent of the Concordia and Rayas Company, one of the largest companies operating on the Veta Madre, north of the Sirena mine, a milling plant and other interests.

It issue notes in accordance with the authorization dated 3 August 1914CEHM, Fondo XXI Venustiano Carranza, carpeta 12, legajo 1207. Existing examples are for 10c, $1, and $10. 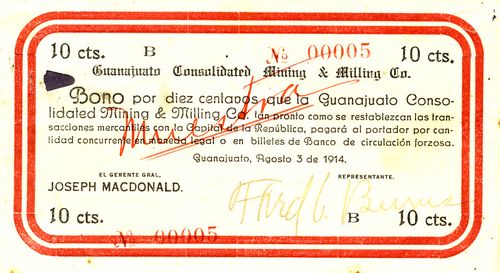 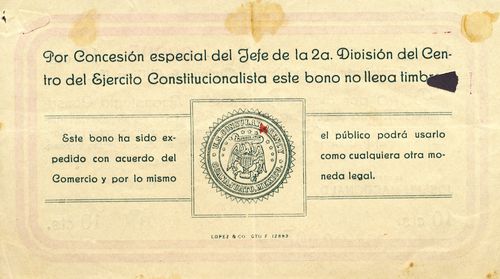 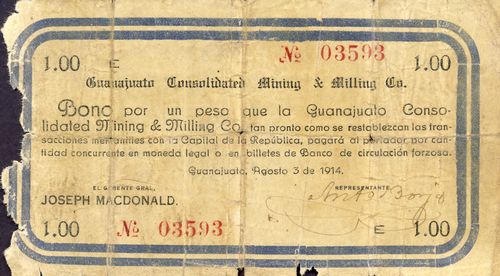 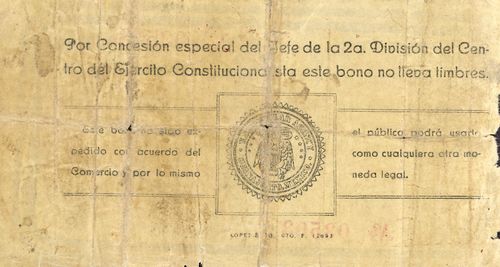 By 1 November some public offices and shops had begun to refuse the notes. The local newspaper, El Observador, said that it realized that they were not of forced circulation, but they had been issued with the approval of businesses and the public and did state that the companies would redeem them with legal tender as soon as business communications were restored with the capital of the Republic. The paper was aware of poor people who had not been able to buy necessities, and speculators who were buying the notes at less than face value. It called upon the authorities to actEl Observador, Guanajuato, Año XI, Núm. 895, 1 November 1914.