Having obtained Carranza agreement in an accord dated 21 March 1915, on 29 March General Alfredo J. Machuca, authorised an issue of vales, for 5c, 10c, 20c and 50c, guaranteed by $500,000 in bronze coins deposited in the Tesorería General del EstadoPeriódico Oficial, Hidalgo, Tomo LXVIII, Núm. 30, 8 May 1915. The notes, to be dated 1 May, were to be initialed by the Governor or the Secretario de Gobernación or Secretario de Hacienda.. They would be redeemed by the Tesorería del Estado when presented in multiples of $50. In accordance with this decree Machuca issued

On 1 May the government paid its employees in 25c and 50c vales. 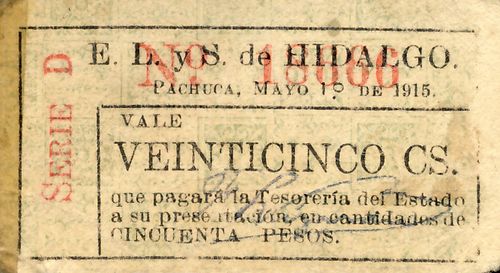 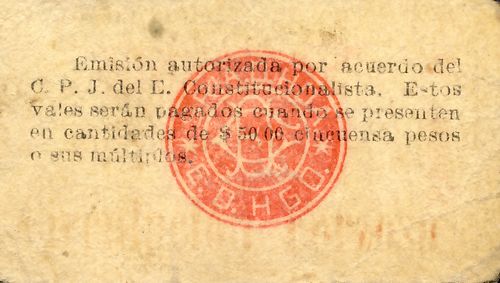 The 20c were red and of papel de china so the public nicknamed them palomas (doves) because they blew away in the Pachuca breeze whilst the 50c notes were green and so called pericos (parrots)Teodomiro Manzano, Anales del Estado de Hidalgo, 2a parte, p150-151. 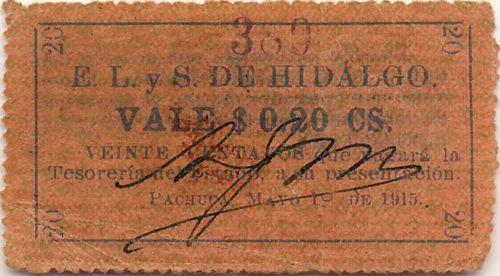 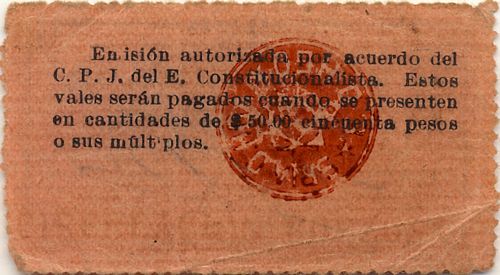 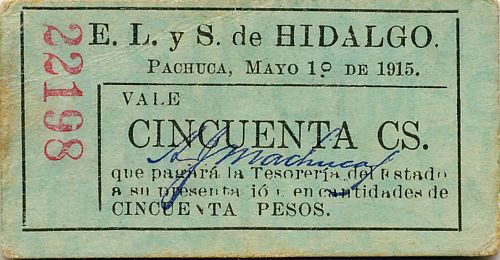 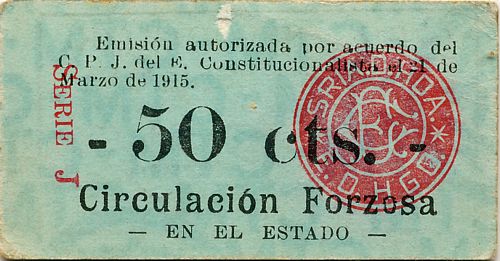 During Miguel Gómez Noriega’s administration (3 July to 2 August) he ordered the issue of $29,000 in 10c cartones, to replace the 20c notes which had been printed on thin paper and were useless. 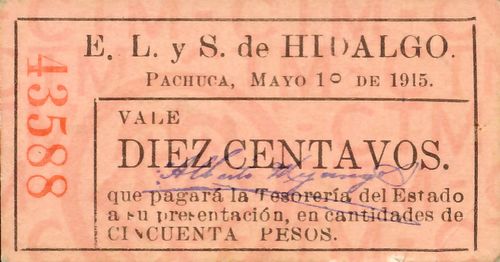 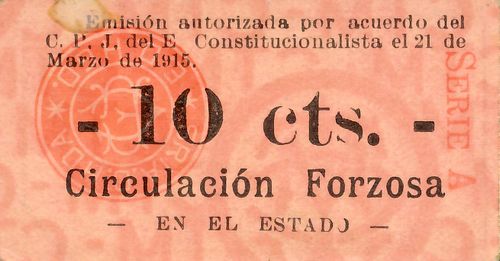 When Pachuca was under the control of the Villistas in July, they took $3,000 in these 10c cartones from the government printing office and put them into circulation, using them to pay their troopsAGN, Fondo Gobernación Periodo Revolucionario, caja 93, exp. 36, folletos 8 Secretario general L. de la Vega to [    ], Pachuca, 20 August 1915.

When Miguel Gómez Noriega handed over the government on 2 August, there was $59,624.15 in cash, mostly in Veracruz notes and other notes of forced circulation, with just over $5,000 in these valesAGN, Fondo Gobernación Periodo Revolucionario, caja 93, exp. 36, folletos 8 Secretario general L. de la Vega to [    ], Pachuca, 20 August 1915.

On 9 September the Secretaría de Gobernación replied that Carranza had only authorized this issue out of the dire necessity for change. The authorization was for $500,000 (in 5c, 10c, 20c and 50c) but to normalize affairs the Executive acknowledged the $348,756.00 (though in 20c, 25c and 50c). However, since the aim was to unify the currency, this money should be replaced as fast as possible by Gobierno Provisional cartones, which the Tesorería General de la Nación could provide in exchange for any legal paper currency. Moreover, they should declare the $3,000 taken by the Villistas null and void, and that the holders should hand them in to the Dirección de Rentas, under threat of fines or arrest, and that it should be decommissioned in the Oficina RecaudadoraAGN, Fondo Gobernación Periodo Revolucionario, caja 93, exp. 36, folletos 8.

There were in fact four values, with no 5c and with the 20c a different design to the others.  Did they produce three values (10c, 25c and 50c) in a single format, then realize that they had produced a 25c note instead of the 20c note specified in the decree? The 50c are known on white paper. 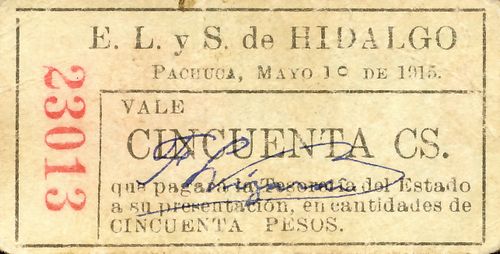 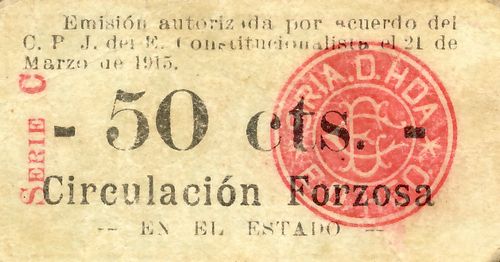 The most notable differences were: