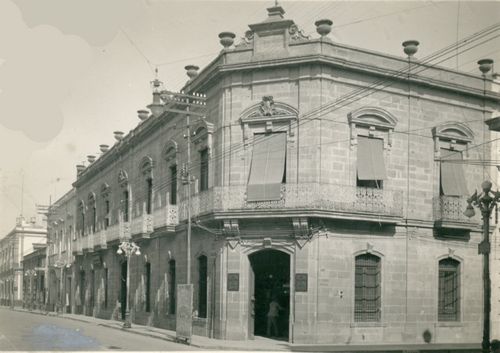 On 15 November 1899 the board approved the establishment of a branch in TepicEl Contemporaneo, San Luis Potosí, 25 November 1899, the Secretaría de Hacienda gave its approval on 28 December and the branch opened at calle de México 32 in July 1900Diego Moreno and Salvador Velasco, prominent merchants and landowners in the area, had represented the bank in negotiations (La Libertad, Morelia, tomo 10, núm. 11, 14 March 1902). The first manager was Carlos Llaguno y del Hoyo, the cajero-contador Juan Camargo and the board composed of José María Menchaca, Germán Helmrich, Andrés Chaurand and José Vargas (La Democracia, Tepic, 22 July 1900). Camargo replaced Llaguno as manager in September 1900 (La Democracia, Tepic, 2 September 1900).

The Banco de Jalisco suspended its operations in Guadalajara at the begining of June 1914. According to a newspaper report it was at first believed that this was due to financial difficulties, but the manager explained that the bank had been closed by order of the government because it had failed to deliver $600,000 in connection with the internal loan that Huerta floated several months beforeEl Paso Herald, 7 July 1914. Another version was that the Huertista commander, General Mier, asked the Secretaría de Guerra y Marina for money to pay his troops, and the department told him to request the money from the Banco de Jalisco, which refused. Then the Secretaría authorized, or rather ordered, General Mier to force a loan. Mier refused several times but eventually his soldiers forced the directors to open their strongroom and extracted around $300,000, of which $15,000 were in gold, $60,000 and the rest in banknotesEl Imparcial, Tomo XXXVI, Núm. 1920, 27 July 1914.

On 13 July 1915 Obregón reported that the bank had reopened after he threatened that if it did not do so with five days to honour the notes it had in circulation he would confiscate its propertiesABarragán, caja II, exp. 23, telegram Obregón, Guadalajara to Carranza, Monterrey, 13 July 1915.

Because of the sums that the bank eventually had to subscribe for Huerta’s loan on 15 December 1915 the Comisión Reguladora e Inspectora de Instituciones de Crédito found that it did not have enough in assets to underwrite its notes in issue and so cancelled its concession. However, under Obregón's decree of 31 January 1921 the bank was placed into Class A (for banks whose assets were greater than their liabilities) and allowed to resume all customary operations except the issue of bank notes.