Mariano Morales of Degollado was a leading Maderista in 1911El Regional, 3 June 1911. 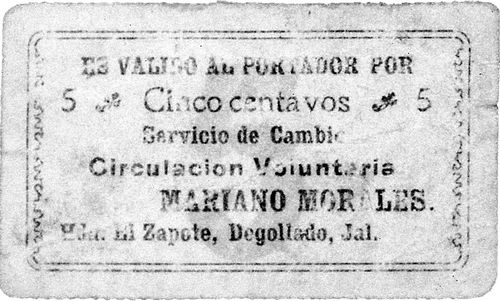 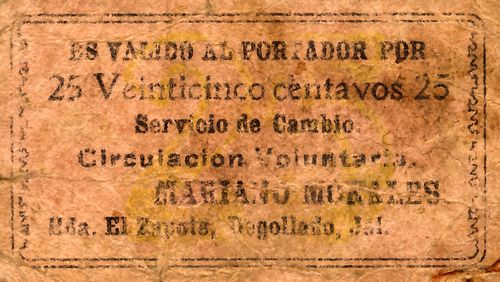 This issue is similar to that of the Compañía de Fletes y García in Juchitlán, so will have dated from mid 1916.

The original 17th century builder of this hacienda is unknown, but the Pachecho family, headed by Manuel Pacheco Calderón from Santander, Spain, became the owners in the mid-18th century.

In 1865 Manuel Fernández del Valle and his brother Justo arrived in the area from Asturias, Spain. They were determined to make their fortune in Mexico and they succeeded beyond their wildest dreams. They married two of the daughters of Francisco Martínez Negrete, an important Mexican businessman, and these marriages allowed access to the funds they needed to start their empire. The del Valle brothers bought textile factories, invested in railroads, bought mines, and started the Banco de Jalisco. By 1914, they had acquired the hacienda de San Sebastian at a price of $350,000. At the time, the hacienda possessed almost 65,000 acres and its primary focus was livestock, including cattle, horses, pigs, and sheep but it was still producing quantities of maiz, beans such as guasano and frijol, barley, wheat, and potatoes. Early records also show that the hacienda was well known for distilling and selling tequila as far back as the 17th century. 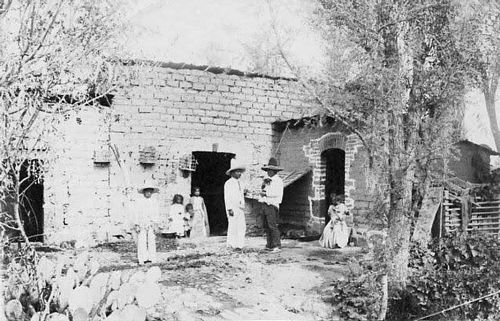 According to Carlos E. Parra Ron, Etzatlán's official historian (cronista), "the hacendados’ vanity made them believe they were demi-gods...they were little interested in the misery they created, and those who suffered the consequences were the poor people." There was a vast gap in wealth and social standing between the hacendado and his family and the peones who worked for them. Patios with flower gardens and artistic sculptures might be enjoyed by the owner, but the workers lived in squalid, one-room, dirt-floored huts. San Sebastian's records show that 400 peones worked there in 1903. For them, a day's work paid only 37 centavos from which they had to support not only themselves but their families. Most were not lucky enough to be peones acasillados with free huts, so they might well have to pay rent to the hacendado for the privilege of living in their hovels. Such was the structure which underlay the hacienda owner's sumptuous life. 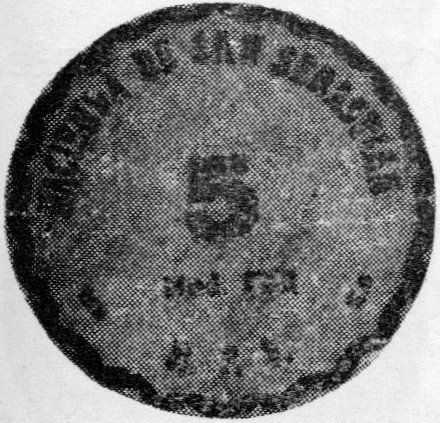 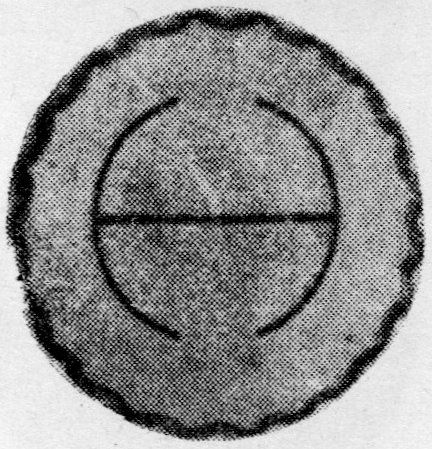 A second order, on 22 June 1915, was for brown cartones in weirder denominations. 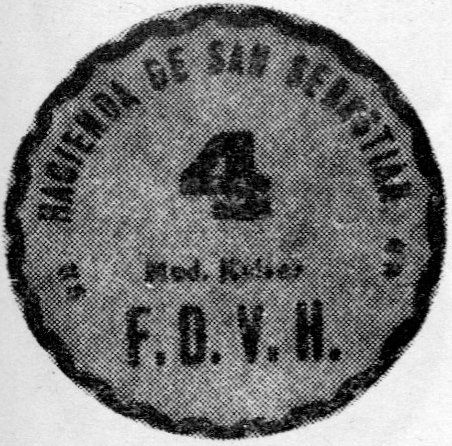 This was owned by Manuel Capetillo. Capetillo was a friend of the revolutionary Amado Aguirre and so offered various revolutionary commanders food and sustenance and pasture for their horses, and thus enjoyed their good wishes. 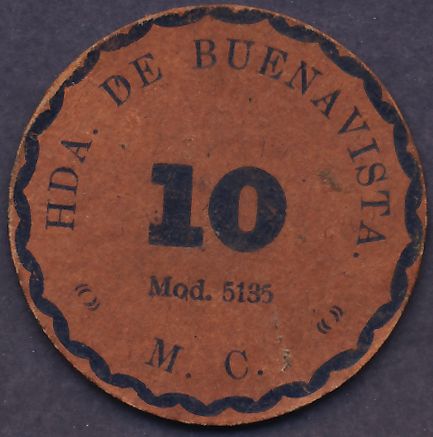 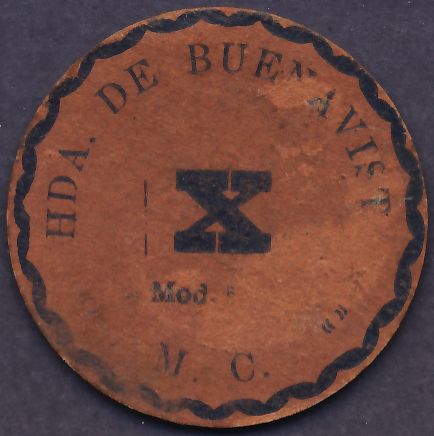 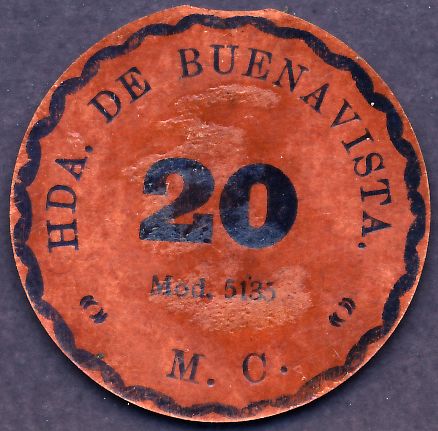 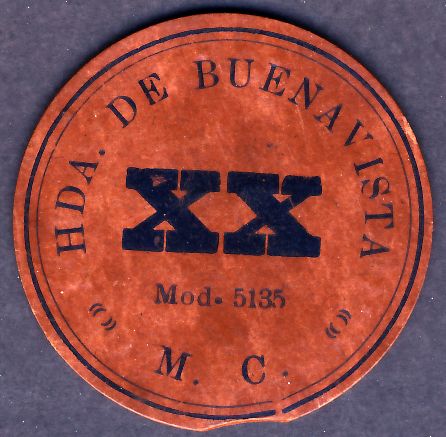 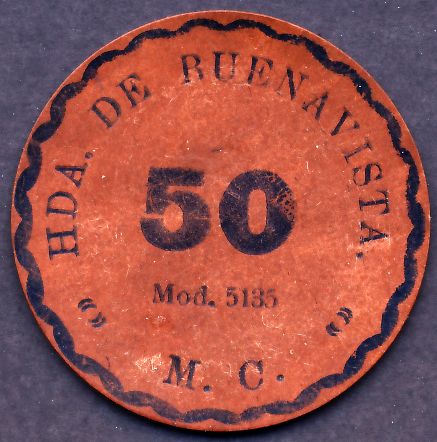 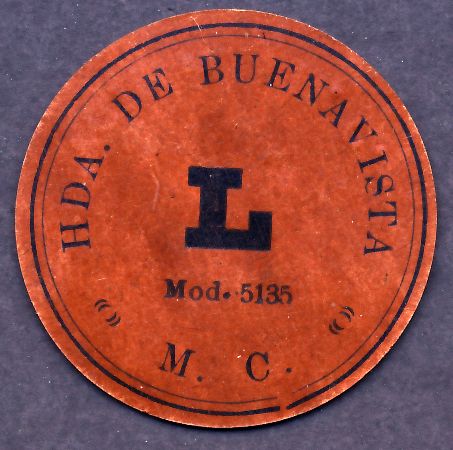 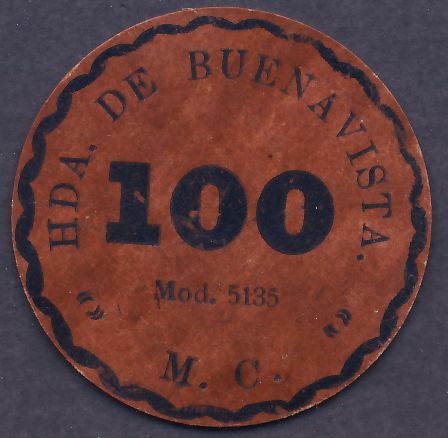 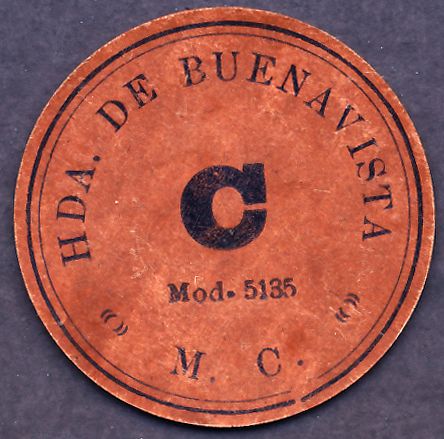 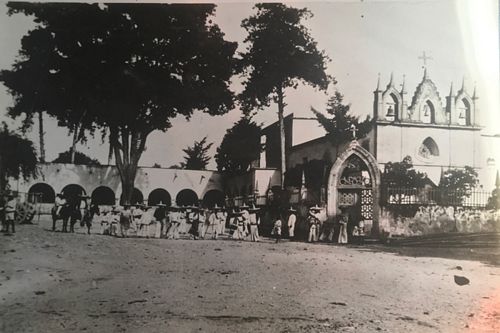 This hacienda had been in the Villaseñor family for over 200 years.

These cartones were modelo 5193, produced on 24 May 1915. They have the name of Lorenzo Villaseñor y Cia. 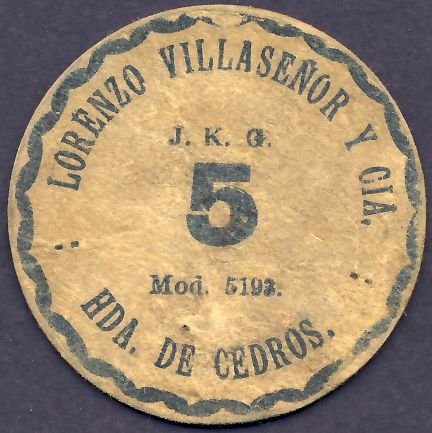 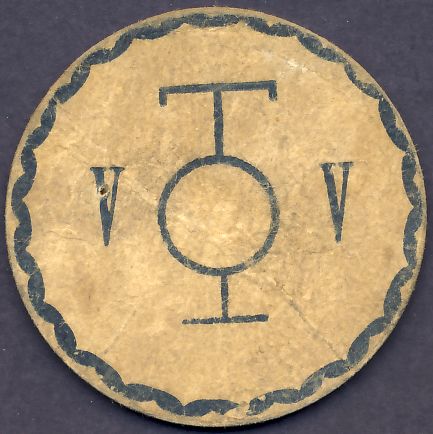 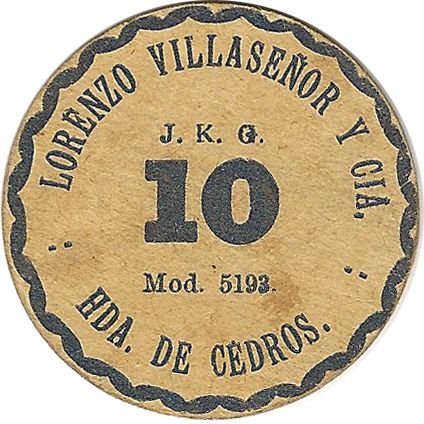