The story of the 50c notes issued by General Gertrudis G. Sánchez in Michoacán is not only interesting in itself but also illustrates wider lessons about the use of fractional currency by the various factions during the revolution and the activities of currency speculators.

In 1913, after the assassination of President Madero, Gertrudis G. Sánchez rose in arms in Guerrero and was appointed commander of the Constitutionalist División del Sur. After a long and difficult campaign he captured Morelia, the capital of Michoacán, in July 1914, and was named Governor and Military Commander of that state.

By December 1914 Michoacán, like everywhere else in Mexico, suffered from a shortage of fractional coinage and on 19 December Sánchez authorised the issue of $300,000 in five, ten, twenty and fifty centavos notes. These were to be printed according to instructions from the Secretaría de Gobierno, guaranteed by the Tesorería General del Estado, and of compulsory acceptance throughout the state. 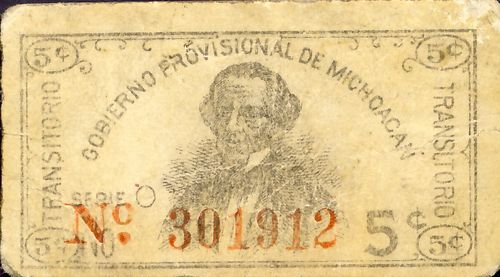 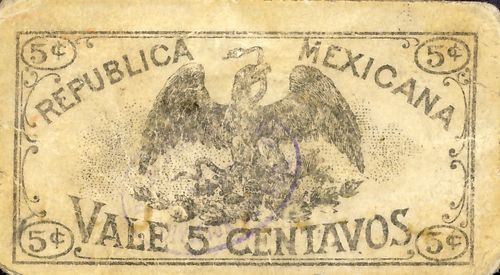 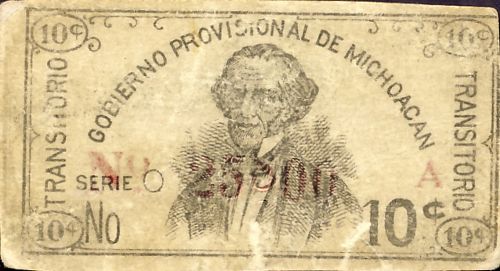 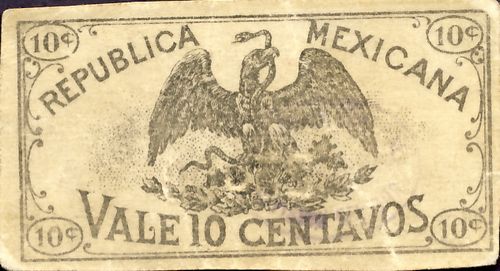 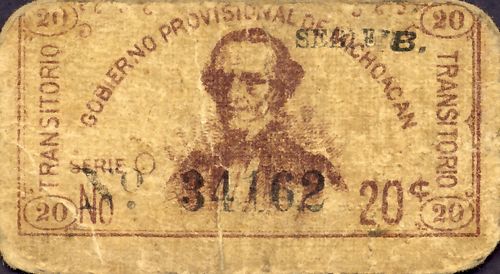 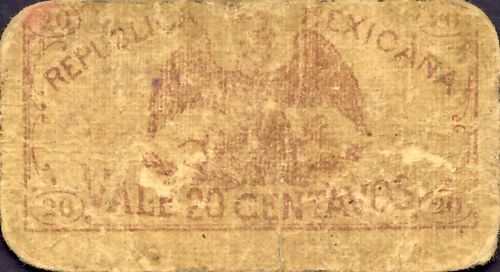 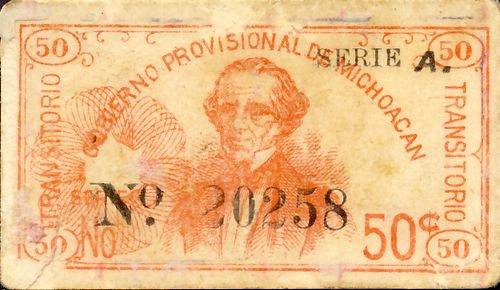 In the split between Villa and Carranza Sánchez had finally come down on the side of Carranza, and he was driven out of the capital by his opponents, captured and shot. Only days before he left, on 5 February 1915, he had issued $1,237.000 in Estado de Michoacán notes.  On 4 March the new Villista Governor, José I. Prieto, declared this second issue null and void, on the grounds that to honour it would only deprive the state and enrich speculators, whilst at the same time listing various Villista issues as of compulsory circulation. Prieto also declared that Sánchez’ fractional currency (a total of 622,401 notes in six series, thus)

had to be revalidated in the offices of the Pagaduría General of the Brigada “Benito Artalejo”, in the Government Palace, within thirty days, or it would also be worthlessPeriódico Oficial, Michoacán, Año 1, Núm. 1, 7 March 1915.

Often, when one side invalidated another side’s currency, they exempted fractional notes, either for practical reasons and convenience or because the poor would be the ones most affected. Indeed, it is surprising that Prieto required a revalidation: as it is, we known of examples revalidated by the Pagaduría General or signed by various officials. 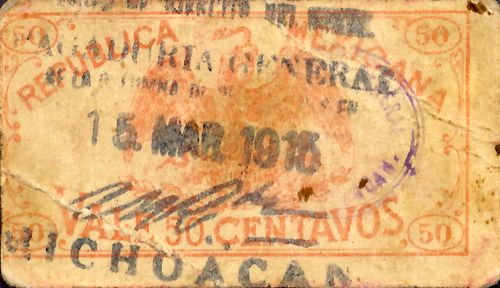 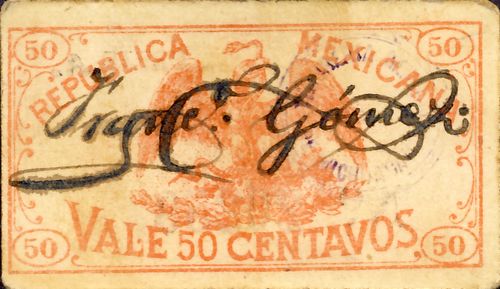 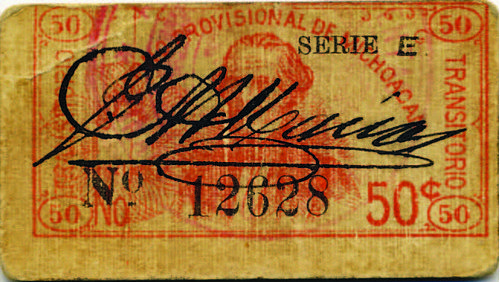 The Villistas were unable to hang on to Morelia for long and Prieto evacuated the capital on 3 April. When they left his followers took with them all the money they could, including a quantity of unissued 50c notes. The change in control brought new worries for businesses which began to refuse the existing currency, even though it was the only one in circulation, and on 6 April the town council invited people to continue accepting the notes until the matter was resolved.

The incoming Carrancistas initially allowed Sánchez’ fractional currency to continue circulating, as he had ultimately been a Carrancista. On 28 April the governor, General Alfredo Elizondo, declared that the cartones were of obligatory acceptance and those who refuse them would be severely punishedPeriódico Oficial, Michoacán, Tomo XXIII, Num 26, 2 May 1915. On 25 February 1916 the Presidente Municipal of Morelia listed the notes that should be accepted: these were Carranza’s issues such as Monclova, the Ejército Constitucionalista and the Veracruz Gobierno Provisional; issues of Carranza’s generals, Alvaro Obregón and Manual M. Diéguez; Constitutionalist cartones and, finally, Sánchez’ cartones for 5c, 10c, 20c and 50c. So Sánchez’ notes were still valid, though not necessarily popular and consistently refused, in the spring of 1916.

On 2 April the Jefe de Tenancia at Charo reported frequent difficulties because retailers were refusing to accept Sánchez’ cartones. He asked whether he should arrest or send then to MoreliaAMMor, caja 36, exp. 26.

On 7 April 1916 Joel Tapia, the administrator of the main branch of the local pawnshop, the Monte de Piedad, in Morelia, sold a customer a ring for thirty-three pesos. The purchaser paid in 50c Sánchez notes, then asked Tapia if could change some other 50c notes and half an hour later brought back $2,000 worth. The notes were uncirculated with bright colours (casi nuevos y flamantes), which suggested they had been hoarded for some time. These Tapia changed for revalidated Gobierno Provisional de México (Veracruz) notes, and later sold on to various shopkeepers who wanted small change. The purchaser said he had more Sánchez notes, so Tapia, becoming wary, asked for his name. He replied that he was Jesús Montero, of calle de Mina 77, Mexico City, and produced a couple of letters from high officials to verify his credentials.

Although Montero obviously thought he was doing nothing wrong, the authorities took fright. They realised that the notes were probably taken by the Villistas when they evacuated Morelia and to acknowledge them would be tantamount to an open-ended commitment and could destabilise the treasury and local economy. So on 8 April, the Tesorero General, D. Carreón, announced that the government had demonetised the 50c notes, adding that the few that had been legitimately in circulation had already be amortized by the Tesorería GeneralPeriódico Oficial, Michoacán, Tomo XXIV, Num 29, 9 April 1916.

The 5c, 10c and 20c values remained of compulsory circulation. On 4 May, in reply to a query C. M Sandoval, the Presidente Municipal of Morelia, told his counterpart in Quiroga that the other three values were of forced circulationAMMor, caja 36, exp. 26 and on 9 May he gave the same answer to the Jefe de Tenancia of Santiago UndameoAMMor, caja 36, exp. 26.

On 10 May Montero, having already been questioned in Mexico City, was questioned again and said that he had about $22,000 in these 50c notes. He had no idea that they had been taken by the Villista faction but he had got them three months before in El Paso from a businessman, Bernandino Salazar. Salazar had given him about $32,000 to use or exchange in MexicoAMMor, caja 36, exp. 2.

During the revolution border towns such as Nogales and El Paso were hotbeds for speculators, buying up currency cheaply to use to make purchases or to pay taxes south of the border, or in anticipation that the issuer would ultimately be successful and honour their paper. In addition there was a vibrant market for the millions of counterfeit notes put into circulation.

The end for the Sánchez notes came in June 1916. On 20 June the Presidente Municipal noted that the government had only tolerated their existence for the sake of the poor and to facilitate small change, and would now change them at par for Veracruz notes. To this end it set up an Oficina de Canje in the Tesorería General and gave a deadline for handing in any outstanding cartones.