On 17 February 1915 the President of the Convention, Roque González Garza, authorised an issue of $100,00 in cartones of 5c, 10c and 20c. Thus, in late February 1915 it was reported that "the Zapatistas in Cuernavaca" had issued $100,000 in cartones of 20cLa Prensa, Año I, Tomo I, Núm. 18, 24 February 1915. The newspaper illustrated a cartón and pointed out that as it had no stamp or contraseña it would be very easy to counterfeit (In fact they were stamped and numbered). Although the Zapatistas had declared that they had not and would not issue paper currency, relying instead on the coins they minted, it was expected that they would do so quite soon. However, this was not exactly a Zapatista issue.

Presumably the other two values followed shortly after. 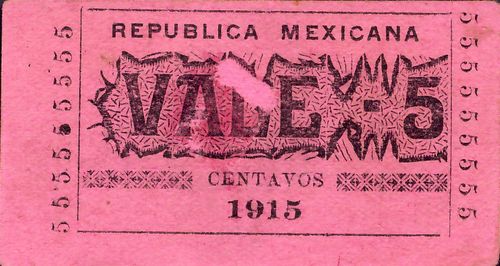 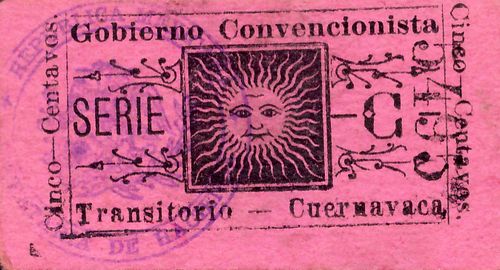 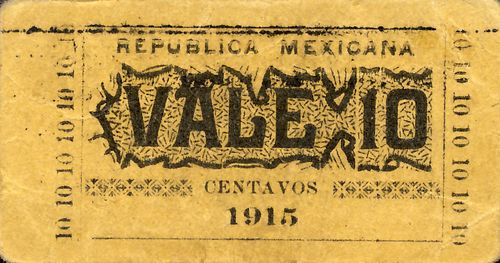 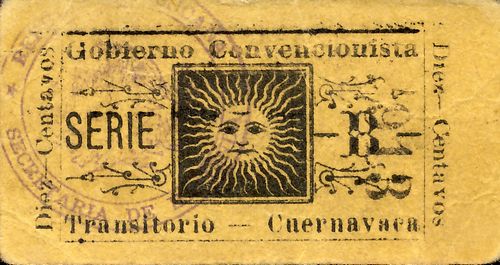 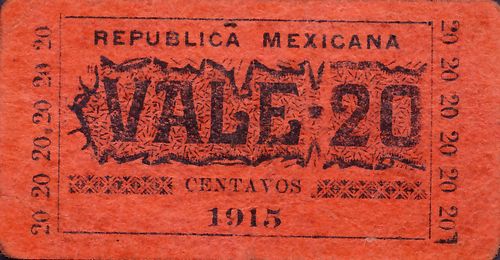 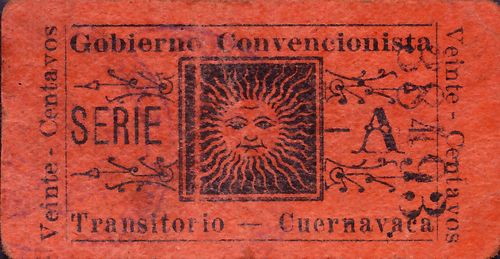 Apparently only a small part of the $100,000 was put into circulation, before the Convention moved to Mexico City. In March 1915 the Conventionist President Roque González Garza reported that, in spite of the difficulties in obtaining materials, they had so far issued $5,450.50 thus:

and had $5,700 more ready to put into circulationinforme of President Roque González Garza, Diario de los Debates, 4 March 1915. On 30 April it was reported that almost $15,000 had been in circulation in Cuernavaca but had been withdrawn gradually to avoid an economic upset and little remainedEl Norte, México, Tomo I, Núm. 9, 30 April 1915.

These cartones made it to Mexico City. In November 1915 Teniente Coronel José Morales Hesse, general manager of the Mexico City tram company, complained that on 2 August the company had been completely paralysed by the destruction of tracks, cars etc. and the lack of money to pay its worker, as its funds consisted of “billetes de “Toluca”, “Dos Caras”, “Sábanas villistas”, cartones falsos, emisión de veinte centavos, expedidos en Morelos, etc.”El Pueblo, Mexico, 7 November 1915.

These were counterfeited. On 26 May some secret police and a detachment of soldiers raided a house in 16a calle del Ferrocarril Cintura in Colonia de la Bolsa, Mexico City. Manual Paniaguet and Carlos Gómez were killed in a shootout, and Humberto Paniaguet, María Trinidad Gómez, Rafacia Medina and Faustina Bello were arrested. The police recovered a press for printing notes and cartones, numerous types, jars of red and black ink and a revalidation stamp, similar to that used by the Tesorería de la Federación.

We have counterfeit 20c cartones. 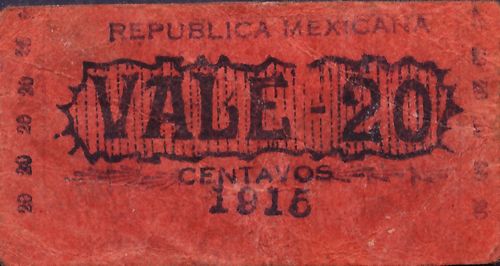 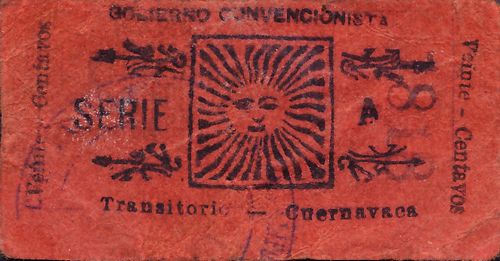 On 28 August 1915 the Convencionist President Francisco Lagos Cházado wrote from Toluca to Zapata in Tlaltizapan. He suggested that because of the difficulties caused by having many pagadores in the state of Morelos they appoint one person as Interventor and Pagador General to oversee the production of the machinery, so that half the money produced was dedicated to paying the forces in Morelos and half to forces that were not included in the Ejército Libertador del SurAGN, Fondo Emiliano Zapata, caja 15, exp 19, f 44-45.

On 10 October 1915 the Ministerio de Hacienda y Crédito authorised the issue of vales for $1 and $5[text needed]. 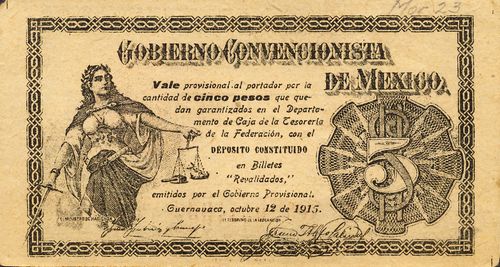 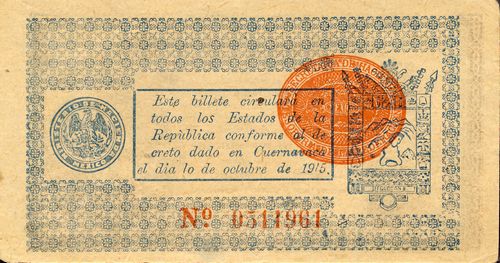 These $5 notes are a companion to the 50c notes issued in Toluca, Estado de México, in August 1915. Indeed, the fact that the reverse carries the ideogram for Toluca, the same as on the provisional $5 note from that city, suggests that they were printed in Toluca, possibly, given their inferior quality, at the Escuela de Artes y Oficios para Varones rather than the Oficina del Estado.

They refers to the decree of 1 October 1915 (sic, 1o for 10) and carry the signatures of Luis Zubiría y Campa as Ministro de Hacienda and Francisco Alfonso Salinas as Tesorero de la Federación.

They claim to be backed by a deposit of revalidated Gobierno Provisional de México notes, which cannot have inspired much confidence.

On 27 December 1915 the Consejo Ejecutivo noted that, since the Convention lacked fractional paper currency, municipalities and certain military commanders had issued low value cartones, but these municipal issues, whilst helping small transactions, were only obligatory in their locality, and so threatened unity and were a danger to business, individuals and to the forces. To improve the economic situation it needed a single coinage with a single guarantee, so the Consejo Ejecutivo banned the ayuntamientos and military commanders from issuing paper currency, and authorised the Ministerio de Hacienda y Crédito Público to make an issue of 50c notes and 5c, 10c and 20c copper coins, to replace the local cartones that would be withdrawnAGN, Colección Cuartel General del Sur, vol. 1, exp. 2, f. 42. 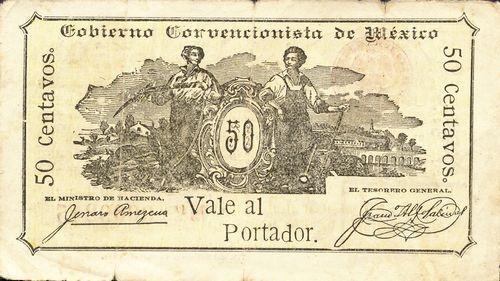 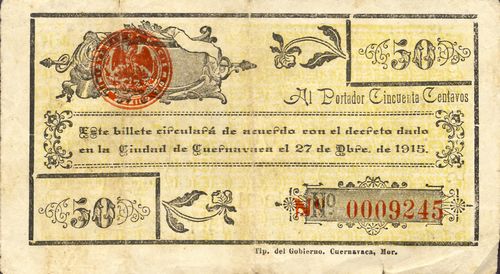 These 50c note have the signature of Jenaro Amezcua as Ministro de Hacienda and Francisco Alfonso Salinas as Tesorero General. 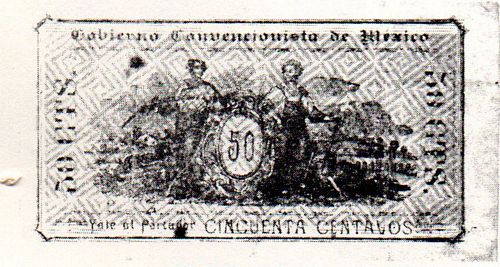 On 10 January 1916 the Consejo Ejecutivo, at Cuernavaca, passed a decree ratifying the 10 October decree and authorising the ministry to issue notes for $2 and $10. It added that the vales that had recently been issued by the Oficina Impresora de billetes convencionistas, without series or numbers, would be changed for this new issueAGN, Colección Cuartel General del Sur, vol. 1, exp. 2, f. 51.

The $2 notes refer to the decree of 10 January and also carry the signatures of Jenaro Amezcua as Ministro de Hacienda and Francisco Alfonso Salinas as Tesorero General.

On 3 February the General Jefe de la Plaza in Yautepec, Eustacio Salazar, informed Zapata that the Pagador General, General Reyes, who was in Yautepec, had told him that he needed presses to print 50c, $2 and $10 notes. Since there were two or three presses belonging to General Salazar, enemigo de la causa, he asked permission to confiscate themAGN, Fondo Emiliano Zapata, caja 16, exp. 9 f 12 telegram Salazar, Yautepec to Zapata, Tlaltizapan, 3 February 1916. On [    ] it had been decided to make all the various paymasters answerable to one.