On 8 April 1892 the federal executive agreed a contract[text needed] with Samuel Lederer to establish a bank of issue in the state of Oaxaca. However, Lederer was unable to fulfil the conditions of the contract and it was finally declared void in the bonfire of unfulfilled concessions that Limantour made in March 1897 to clear the way for his Ley General de Instituciones de Crédito.

The branch of the Banco Nacional de México

“With the boom in mining, agriculture, and commerce, the demand for credit [in Oaxaca] increased. In the late 1880s a group of prominent Oaxacans visited General Díaz to advocate for the establishment of a branch of the Banco Nacional de México, which they argued would offset the usury of local moneylenders and provide access to funds for economic development. Always attentive to the welfare of his patria chica, Díaz persuaded the directors of the Banco Nacional to found this branch. Given the threat of bandits, the crucial problem facing this project was how to transport the initial funds of $800,000 (no railroad yet existed). The directors of the Banco Nacional asked the president for an escort of rurales or even an army detachment to accompany the transport of this money. Díaz replied that a detachment of soldiers would call even more attention to the party. The progress-minded Bishop of Oaxaca, Eulogio Gillow, came up with an original solution. President Díaz advised the bank officials that their representative and the $800,000 in bills would travel to Oaxaca with Gillow: “I will put the treasurer who will carry the funds in contact with the bishop and traveling together, with the object of maintaining the utmost reserve, the money will surely arrive at its destination. Thus, if the illustrious Mr. Gillow treats the bank’s employee as one of his most intimate friends, having placed the valise in the coach, or on the prelate’s litter during the day and under his bed at night, until they arrive in Oaxaca”. Thus did the Catholic Church enable the establishment of a branch of the Banco Nacional de México in the city of Oaxaca in 1888”Francie R. Chassen-López, From Liberal to Revolutionary Oaxaca, Pennsylvania University Press, 2004..

This bank grew out of the branch of the Banco Oriental de México that it had opened in Oaxaca in July 1901The junta de vigilancia was composed of Jacobo L. Grandison, José Zorrilla and Francisco Gómez Trápaga, the manager was Guillermo Trinker and the book-keeper (tenedor de libros) Luis Benitez (El Popular, 8 July 1901) and the close ties of the founders (five from Puebla, almost all Spaniards and three from Oaxaca, again with Spanish roots apart from the Scotsman Jacobo Lucas Grandison). The concession for the bank was granted on 17 July 1902 to Quijano y RiveroQuijano y Rivero y Compañía, formed in 1900 to establish the La Esperanza cotton textile factory, was, in fact, a partnership of partnerships: the 'socios' were the original Jose Antonio Quijano and Manuel Rivero Collada partnership of Puebla, the Mowatt y Grandison Hijos partnership of Oaxaca, and Francisco M. Conde. They invested $53,000 in the venture. Within six years, that investment had leveraged $429,731 in net borrowing, which financed the purchase of assets valued at $508,741 .37. Nevertheless, the business was not successful, and in 1906 the partnership dissolved after four years of losses. Ownership of the La Esperanza factory passed to Quijano and Rivero, who now owed the other two partners $52,674. Rather than sell off ten per cent of the firm's assets to pay off their partners, they financed their takeover through paper discounted at the Banco Oriental de México, of which Rivero was president. They then re-equipped the factory, and it achieved profitability Had they lacked recourse to the Banco Oriental de México, it is likely that the factory would have been broken up upon the partnership's dissolution in 1906. , the succesors to José Zorrilla y Ca., and Manuel Rivero Collada, representing Trápaga y Ca, and Mowatt y Grandison, hijos. 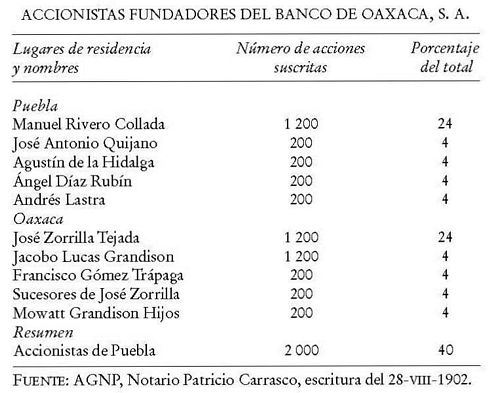 The new bank operated from 15 November 1902. Though autonomous, it continued to function as a branch, with the same manager, premises (at 1a calle Armenta y López), account holders and using the Banco Oriental de México notes until their own were delivered.

Branch offices were opened in Ocotlán, Puerto Angel, Salina Cruz, Tehuantepec (Istmo)a small city but with future promise. The branch opened on 31 July 1905 with Francisco Guzmán as manager and Rafael Silva as cajero-contador. Silva was replaced at the start of 1907 by Carlos Trinker, Guillermo’s son and Tuxtepec.

The American Bank Note Company produced the following notes. It engraved the vignette of the Juárez statue (C 863) for the $5, $50 and $100 notes and of a Tehuantepec girl (C 872) for all the reverses.

The signatories are Guillermo Trinker as Gerente, José Zorilla T., Jacobo L. Grandison and Francisco Gómez Trápaga as Consejero and A. Rueda Camacho as Interventor.