On 23 March 1915 the town council in Oaxaca considered the problem of the lack of bonos and coins and proposed to make an issue of bonos of 5, 10 and 20 centavos, guaranteed by the corporationEl Dictamen, Tomo XVII, Num 1464, 30 March 1915. However, they seem to have delegated the task to the local Cámara de Comercio.

This produced a series of three values, dated March 1915. These were accepted by the major casas comerciales in any amount and could be exchanged in multiples of five pesos. They were signed by  Luis G. Bellon as Tesorero, Herminio Franco as Secretario, or Joaquín [                ][identification needed]. 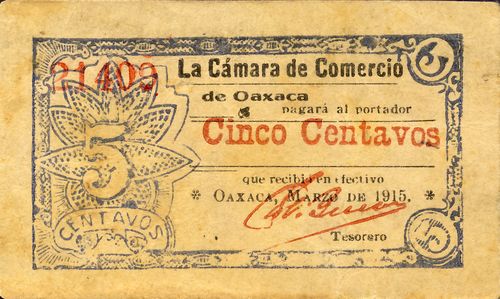 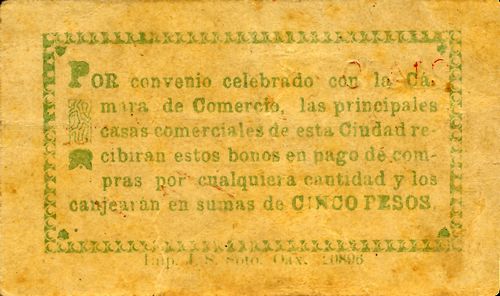 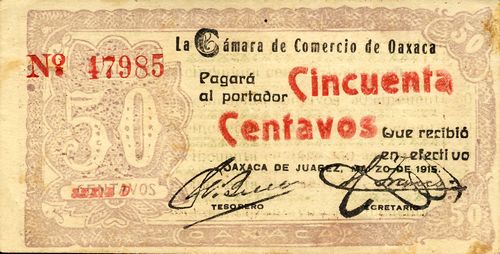 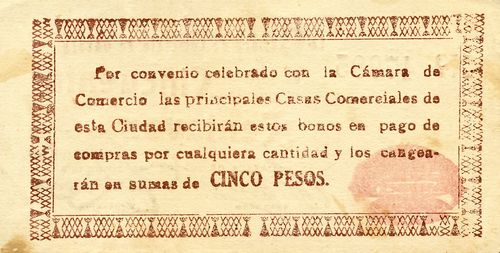 Inevitably there were some typos

'INO PESOS' instead of 'CINCO PESOS' 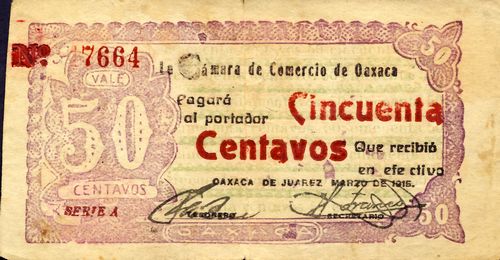 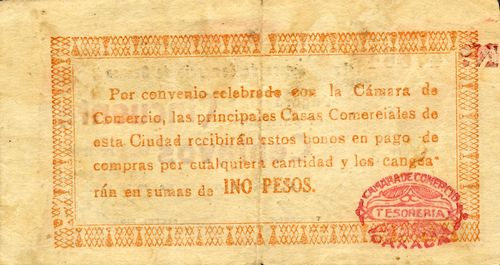 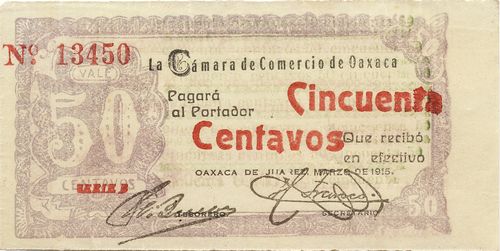 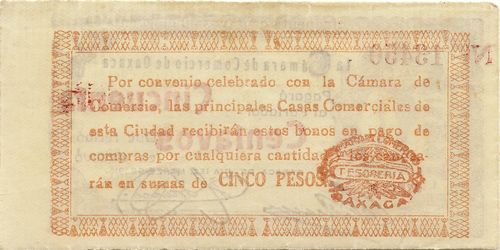 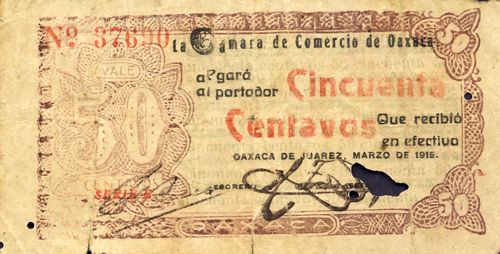 On the reverse of the series D note “principal” appears in the singular, i.e. “ .. las principal Casas Comerciales …”

On 7 April the local correspondant for El Pueblo reported that a new issue of 5, 10 and 20 centavos bonos was expected to replace the ones which after three (sic) months had become unusableEl Pueblo, 13 April 1915. This second issue was dated April 1915. For the 10c value 'La Cámara de Comercio' is found in both large and small type. 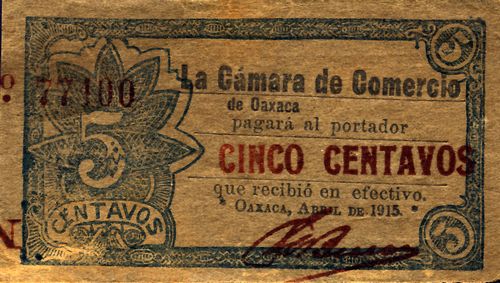 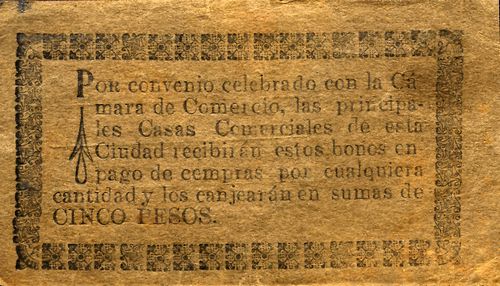 Again there were some typos 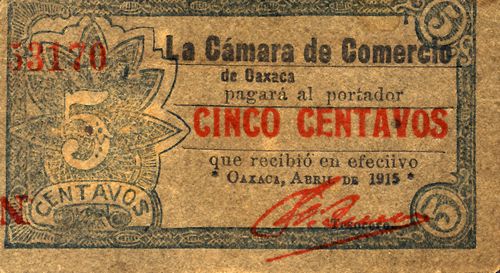 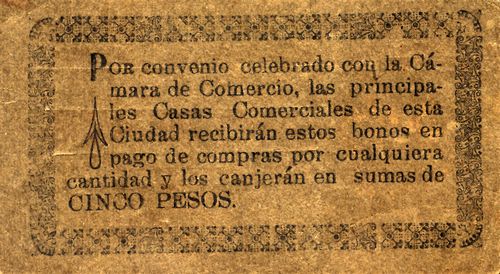 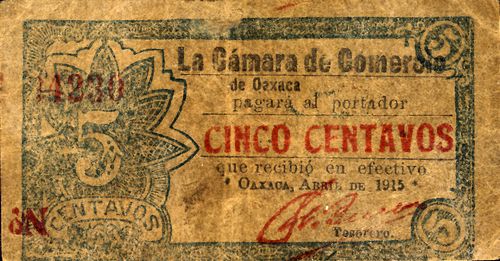 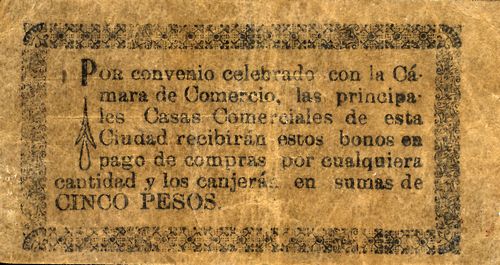 'INO PESOS' instead of 'CINCO PESOS'

On 14 April the Jefe Político wrote to Ricardo Delgado, the Inspector General de Policía, that he had become aware that many of the traders in the "Porfirio Díaz" Market were hoarding the 5c and 10c bonos in order to resell them. He recommended that the Inspector General order a search in the market stalls to verify the truth of the complaint and consign all the people guilty of hoarding to his Headquarters. Delgado acknowledged the request the following dayAO, Fondo Gobierno, sección Secretaría del Despacho, serie Correspondencia, caja 4544, exp.4.

On 16 September governor Dávila, in his informe to Congress, stated that because of the scarcity of fractional currency, his government has tolerated the issue of bonos and vales that circulated in commerce. Until the Mint produced enough coinage he had ordered the Cámara to inform the Government of all the agreements and provisions it has issued, relating to the issue, circulation, exchange and amortization of its bonos. The Cámara had already made several deposits in the Treasury, in order to guarantee its notesAO, Fondo Gobierno, sección Secretaría del Despacho, serie Informes, caja 4825, exp.4. On 16 October the government again acknowledged these issues. Governor Dávila stated that, as the scarcity of fractional currency had produced difficulties and inconvenience and the Mint had not yet produced enough coinage, he accepted the Chamber’s proposal of 7 April to the so-called Constitutionalist Government’s Secretaría de Hacienda, and authorised it to issue and put into circulation 5c, 10c and 50c bonos, to an amount sufficient to meet the needs of the market. The Chamber would guarantee its issues with a deposit in the State Treasury in currency or paper money and in an amount equal to the total value of each issue.

The Chamber should produce a statement of all the bonds that it had issued to date, with the date of issue, series, signatures and number, and for each new issue, would inform the Government of the number and type of bonos that it intended to issue, so that the printing was authorized and an Interventor designated, whose signature would appear on the same.

To put the bonos into circulation, the Chamber's Treasurer would exchange them for notes in amounts not less than five pesos, being able to charge up to two percent for the exchange to cover expenses of the issue. The Chamber would then deliver the cash every ten days to the Treasury.

The Treasury would exchange bonos that became unusable, and amortise the issue when it deemed it convenient in view of the needs of commerce and the general public. Redeemed bonos would then be incineratedPeriódico Oficial, Tomo XXXV, Núm. 83, 16 October 1915.