Juan Andreu Almazán was in a medical school in Puebla, where he started political and military opposition against the then-dictator Porfirio Díaz. He worked for Francisco I. Madero's presidential campaign to prevent Díaz's re-election. When the Mexican Revolution began, he joined the revolutionary party and abandoned his studies. As an early supporter of Madero, he followed him into exile in October 1910. In April 1911 he appeared in Morelos and made contact with Emiliano Zapata. There he presented himself as an agent of Madero, and convinced Zapata to fight under Madero’s banner.

In November 1911, almost immediately after Madero was elected president, Zapata broke with Madero and renewed his fight against the government of Mexico City. Juan Andreu Almazán sided with Zapata and joined the rebellion against Madero.

When Madero was deposed and later executed by General Victoriano Huerta in February 1913, Huerta put out peace feelers to all the rebel groups. Zapata had a great dislike for Huerta and refused to make peace. Andreu Almazán, however, did not share Zapata's feelings about Huerta, and elected to follow him. He was given a combat command, and thereafter became associated with Pascual Orozco, who had also joined Huerta. He and his forces fought against the forces of Pancho Villa. In the battle of Torreón, late March 1914, Almazán commanded a brigade under Gen. Jose Velasco.

When Huerta was defeated in August 1914, Almazán and several other generals associated with Orozco, and known as "Colorados"--because of their red flag--moved south and joined forces with Zapata. Still, Zapata did not integrate them into his forces but allowed them to operate mainly in the state of Puebla. The high-water mark of Almazán’s military career came in December 1914, when his Colorado forces, supported by the forces of Zapata, forced the Constitutionalist Army of Venustiano Carranza out of the city of Puebla, claiming it for the Liberation Army of the South, and the Government of the Convention. The glory was short-lived, however, because the following month, General Obregón’s Constitutionalist Army forced Almazán and the Colorados out of Puebla. Thereafter, Almazán continued to fight against Carranza and his government as a guerrilla faction.

Almazán continued to associate himself with Zapata until the summer of 1916. 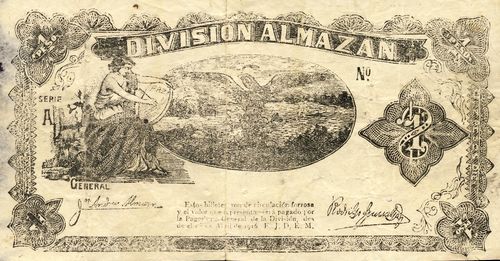 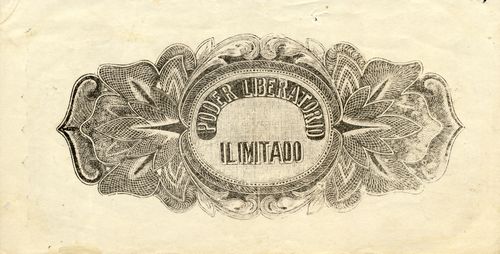 These apparently circulation in the area of Huajuanpan.

In the early summer of 1916 Félix Díaz returned to Mexico and called for the rebel forces of Mexico to join him in the fight against Carranza. As Zapata’s cause seemed to be failing, Almazán chose to align himself with Díaz. Throughout 1915, 1916 and 1917, Almazán operated in the area of Guerrero, Puebla and Oaxaca, primarily as an independent rebel force, yet putting out public pronouncements that he supported either Zapata or Díaz. In early 1918 Almazán changed his base of operations to northeast Mexico, as a rebel force supporting Felix Díaz. With the Agua Prieta revolt of 1920, Almazán supported the rebel forces that removed Carranza and established Obregón as President. For his support, Obregón’s government confirmed his rank as a general. In 1921 he was promoted to Division General, the highest rank in the army. During the 1920s he became director and principal stockholder of a road-building firm, and began investing his profits in industrial and real estate holdings in Monterrey, Mexico City and Acapulco. He was loyal to President Plutarco Calles, and as Communications Minister in Ortiz Rubio’s cabinet in the early 1930s, he enlarged his already considerable fortune by granting government concessions, such as the Pan American Highway construction job from Laredo to Mexico City, to his own company. During the Cárdenas administration, he acquired vast holdings in silver mines. By 1939 he had become one of Mexico’s wealthiest citizens and the next year stood for the Presidency. The 1940 elections were violent and irregular and many believe that Almazán was the real winner. Crying fraud, he left Mexico hoping to build support for an insurrection. When it became clear that little support for him existed, he gave up on the idea of a violent revolt. He returned to Mexico and attended the inauguration of Manuel Ávila Camacho.