The fortunes of war can make strange bed-fellows. In mid-1914 a group of former Federal officers and their followers, such as Higinio Aguilar and Benjamín Agumedo, held sway along Puebla’s eastern and southern border with Veracruz and Oaxaca. Although these had fought against the Zapatistas during the Huerta period, they ended up in an uneasy alliance with them.

Having lost the competition with the Carrancistas to take Puebla, the state capital, in August 1914, Zapata realized the value of potential allies who brought with them not only men, material, and experience bur also officers who had a strategic and political vision. Some three to four thousand ex-Federal forces helped thwart the Constitucionalista consolidation of its hold over the state during the autumn of 1914, capturing and sacking Tehuacán twice and controlling much of eastern Puebla. They played a key role in the taking of the capital in mid-December.

The Carrancista counteroffensive of late December 1914 and January 1915, however, pushed the ex-Federals out of the capital and central Puebla; they retreated to Acatlán, near the Oaxacan border. There they found refuge in the fiefdom of General Ricardo Reyes Márquez, a native of Acatlán, with whom they had more in common than with other Zapatistas. However, they also brought problems. On 22 January 1915, Reyes Márquez wrote to Zapata to tell him that, since Aguilar and Agumedo’s’ forces had arrived in Acatlán and he did not have any small change for purchases, he had issued $2,000 in bonos of five, ten, twenty (sic) and fifty centavos. These were backed by the same sum deposited in hard cash in the district’s Recaudación de Rentas. That office would swap the bonos for cash, and viceversa, so the bonos were not a form of money but merely a means of making transactions easier AGN. Fondo Emiliano Zapata, caja 4, exp.. 2, f 33. 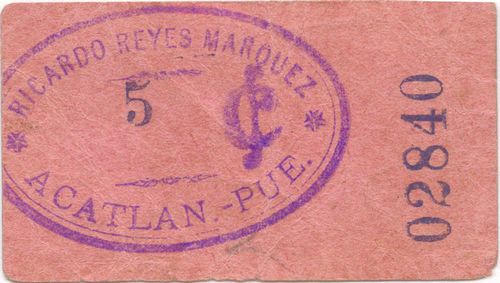 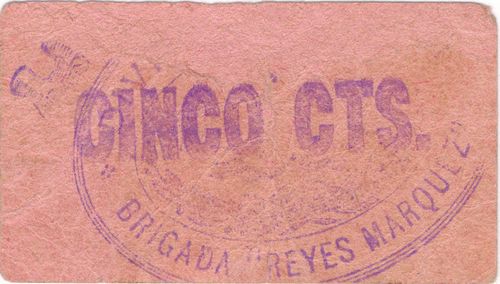 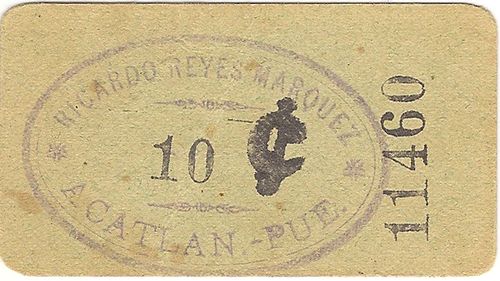 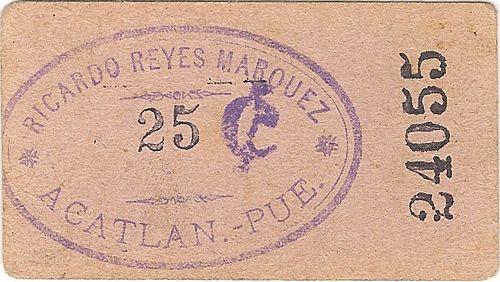 The number range would suggest that the issue exceeded Reyes Márquez’ original figure of $2,000. The 20c note is dated 22 January 1915.

On the same day Reyes Márquez issued a notice to the public about the notes and telling them that they could exchange them in the Recaudación for cash or notes of five pesos and above. Outside Acatlán the tax collectors (cobradores) of the municipalities would be in charge of exchange. The notes would only be acceptable throughout the districtAGN. Fondo Emiliano Zapata, caja 4, exp.. 2, f 34.

Before long, internal dissension reduced this already fractious group’s viability. Argumedo’s heavy-handed actions, including imposing forced loans on Acatlán, prompted Reyes Márquez to intervene. As a result, officers ousted Argumedo as head of the Zapatista Ejército del Oriente and replaced him with Aguilar, his principal accuser and a native of the state. In retaliation, Argumedo pointed out Aguilar’s own crimes, writing on 9 February 1915 to Zapata denouncing Aguilar for, among other things, supporting Reyes Márquez in issuing these notes without any guarantee or formalitiesAGN. Fondo Emiliano Zapata, caja 5, exp. 1, f 118-121. Then a simmering dispute between Aguilar and Reyes Márquez boiled over; Aguilar denounced his southern allies, on 10 February 1915 shot several members of Reyes Márquez’s personal staff, briefly took Reyes Márquez prisoner, and fled across the state line to Oaxaca.

Reyes Márquez subsequently led his forces against the Zapatistas, supported Alvaro Obregón, and served as a federal deputy and senator before being assassinated in May 1929.