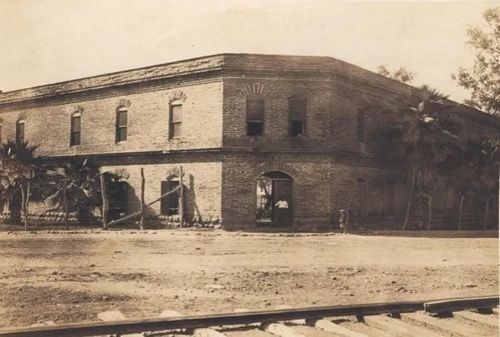 Benjamín Francis Johnston (1865-1937) was born in Sharon, Pennsylvania. He came to Sinaloa and with the hacendado Zacarías Ochoa created the Aguila Refining Sugar Company and acquired the lands of the former Credit Foncier of Alberto K. Owen. He modernised the irrigation canals, lands and factory and in 1903 began to construct the United Sugar Companies, which came to dominate the economy of the region. It operated in a typically capitalist fashion and ironically was ultimately supported by Carranza and the local government against its own workers, who had been champions of the revolution.

Before the revolution the companies’ operations in Sinaloa had been in such financial difficulties that from 1907 to 1911 the Banco Nacional de México, one of its major creditors, had sent a representative, Joaquín Olloqui, to Los Mochis to oversee its finances and authorise every cheque. After Olloqui left, the companies had greater liberty and issued its own paper money of $2, $5 and $10 or vales al portador for larger amounts. With these it paid its wages, covered its debt and even brought properties Filiberto Leandro Quintero, Historia Integral de la región de la región del Río Fuerte, Los Mochis, Ed. El Debate, 1978, p. 547.

The company was said to have used depreciated paper money (bilimbiques) from other states to pay its creditors Mario Gill, La conquista del Valle del Fuerte, Culiacán, UAS – IICH, 1983, p. 69 and to buy garbanzos at extremely low prices, which it then sold in the United States for dollarsMario Gill, op. cit., p. 71.

In 1908 Johnston was appointed United States vice-consul. The U. S. shield over his offices protected his properties during the revolution and and apparently Johnston used the diplomatic bag to smuggle in counterfeit money. In September 1915 in San Francisco Johnston bought from his fellow American, Frank Burke, $200,000 in Monclova notes that turned out to be counterfeit. Johnston told the governor of the state through the Mexican consul in San FranciscoAHGES - ICSGES, Ramo Hacienda, Septiembre, 1915, exp. 4, f. 419.

In [   ] the companies issued cheques for amounts from $1 to $50 in "Billetes Constitucionalistas".

In March 1916 the companies advised that it proposed to withdraw any of these cheques that remained in circulation in as short a time as possible and therefore told the public that it would receive these cheques in exchange for sugar or other goods, at moderate prices, or change them for Veracruz notes.

However, the companies had to resort to making a further issue. These are in reality letters of credit (única de cambio) drawn on the companies' offices in Nogales, Arizona but denominated in moneda infalsificable. We know of $1 and $5 notes dated 1 July 1916.

In August 1916 the state government asked the Presidente Municipal of El Fuerte whether he had authorised the companies to issue its own paper currency in Los MochisAHGES - ICSGES, Ramo Gobernación, Agosto, 1916, exp. 59, f. 410. It also investigated the nickel coins that the companies had had made (AHGES  ICSGES, Ramo Gobernación, Noviembre, 1916, exp. 30, f. 525.).