During their histories many states were obliged to issue bonds to raise revenue or cover debts.

From 1873 the state of Tabasco issued a series of bonds that, if they were all of the same design as the 1889 notes, were in size similar to banknotes but should not be considered as "paper money" because although they were "al portador" and circulated they could ultimately only be used to pay dues.

On 31 January 1874 the Executive modified the 1873 law[text needed]. Among the provisions were that the bonds would be of first, second and third class, with the exception of the $1 bonds, which would be used for exchange for bonds of greater value. The second issue would be made as soon as Congress determined, and would include $1 bonds. The bonds would be accepted in payment of an eighth of any extraordinary tax or impost or in full payment of any tax up to 31 December 1872.

From the details of notes that were redeemed and incinerated in the 1907-1908 fiscal yearPeriódico Oficial, Tomo XXXIV, Núm. 20, 7 September 1912 we can reconstruct what appears in the following tables.

On 27 September 1889 Simón Sarlat, the governor, authorised the issue of $125,000 in bonds of five denominations of $1 to $50 to cover outstanding creditors, including previous 'bonos en circulación'Periódico Oficial, Tomo VI, Núm. 283, 28 September 1889. 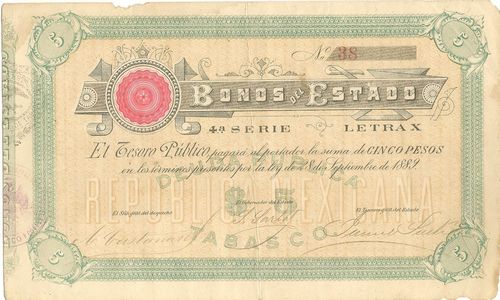 These were signed by Simón Sarlat as governor, Adolfo Castañares as Secretario General and Jaime Sastré as Tesorero General.