As Governor of the northern state of Sonora, Adolfo de la Huerta led the Revolution of Agua Prieta, which put an end to the presidency of Venustiano Carranza, who was killed during the revolt. It was then that de la Huerta was appointed interim President by Congress. When Alvaro Obregón was declared the victor of the 1920 presidential election, de la Huerta stepped down and became the Secretario de Hacienda y Crédito Público.

In 1923, when Obregón endorsed Calles as his successor, de la Huerta started a revolt. He won the support of Catholics, conservatives and a considerable portion of the army officers but with his superb organizing ability and popular support, Obregón crushed the rebellion and forced de la Huerta into exile.

As the rebellion progressed, Tabasco, due to its geographical isolation, became the safest stronghold for the rebels. Adolfo de la Huerta left Veracruz on 5 February 1924, establishing his government in the port of Frontera, which on 20 February he declared the "delahuertista Capital of Mexico". However, on 7 March 1924, de la Huerta fled to Los Angeles and Obregón ordered the execution of every rebel officer with a rank higher than a major.

In December 1923 the firm Vickers, representing some Mexican agency, approached the London office of Bradbury, Wilkinson & Company, an ABNC subsidiaryThe original company was established in the 1850s by Henry Bradbury and begin printing banknotes in 1856. Bradbury then died in 1860. In 1873–74 the firm built an imposing six-storey workshop, for engraving printing plates, in Holborn, London at 25 and 27 Farringdon Road. In 1903 the company was acquired by the American Bank Note Company. In 1917 it moved to New Malden in Surrey still operating as Bradbury-Wilkinson as a wholly owned subsidiary of ABNC., for a quote for twelve million notes in nine denominations. When informed, the New York office tried to get their agent in Mexico City to find out who was placing the order, and he replied that the enquiry was not from the government or any bank and suggested that it must be coming from Adolfo de la Huerta, in Veracruz. The ABNC replied to their Mexican agent that “they would not offer to make bank notes for any unrecognized government party”ABNC.

On 10 February 1924, while at Frontera, Tabasco, in an attempt to finance his revolt de la Huerta authorised an issue of Bonos de la Revolución de 1923. There was to be $5m, carrying an interest of 5%, acceptable in payment up to 50% of federal taxes, and redeemable within three years. Though they were al portador, they were not to be considered as money or legal tender. 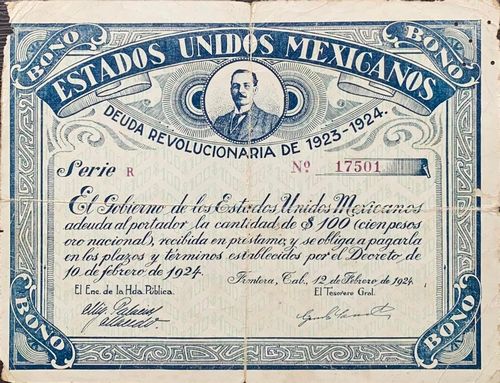 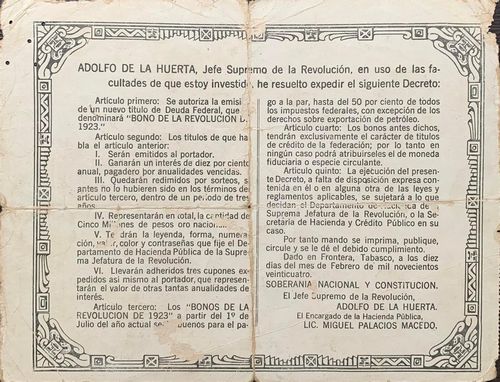 These carry the signatures of Miguel Palacios Macedo as Encargado de la Hacienda Pública and [          ][identification needed] as Tesorero General.

As de la Huerta's revolt failed, any bond (if any) issued in the short period between 12 February and the final defeat in June 1924 will have been rended worthless (and possibly too dangerous to hold on to).