After Huerta’s usurpation Luis Caballero supported the governor of Coahuila, Venustiano Carranza, in his revolt. He rose from Teniente Coronel in May 1913 to being promoted to General Brigadier on 6 November and with his Brigada Caballero captured the capital of Tamaulipas, Ciudad Victoria, on 18 November. The same day Carranza nominated him governor of the state and jefe of the fifth División of the Ejército del Noreste.

Together with Generals Antonio I. Villarreal, Francisco Murguía and Jesús Agustín Castro, Caballero attacked Tampico on 10 December but was unable to take the port until 13 May 1914, when the Huertista general Ignacio Morelos Zaragoza evacuated the place.

Having been besieged for such a length of time, Tampico must have been suffering the usual hoarding of coins and shortage of small change. So on 6 June Caballero authorized the Caja de la Brigada Caballero to issue $25,000 in 50c notes and another $25,000 in one peso notes. These would circulate until enough Constitutionalist fractional notes had been received, when they would be withdrawnPeriódico Oficial, Tamaulipas, Tomo XXXIX, Núm. 48, 17 June 1914; El Constitucionalista, Tomo I, Núm. 77, 20 June 1914.

These notes were printed by a local firm, “El Aguila”, and were of simple designs. Though $50,000 was authorised, these notes were not in circulation for long and in September Anacarsis López de Lara, the Tesorero General of the state, told a Mexico City newspaper that the sum issued was $14,000, duly guaranteed by a deposit of the same amountEl Diario del Hogar, 16 September 1914. 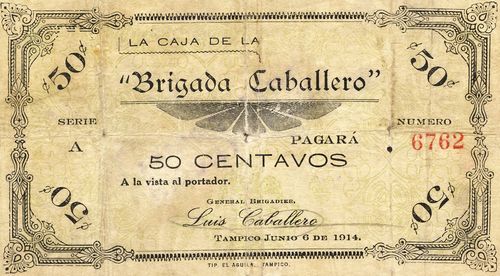 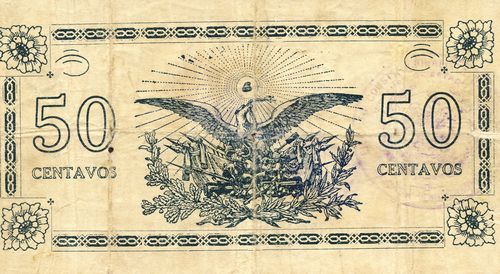 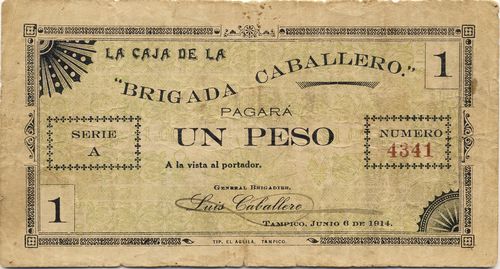 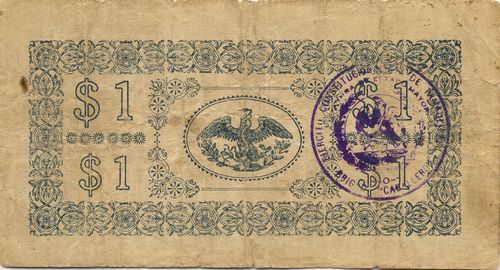 In late June the Subsecretario de Hacienda ordered Caballero to halt his issue, as sufficient fractional currency had been sent to the port, and on 19 June Caballero reported to General Pablo González in Monterrey that he had done so but he added that without a large quantity of money the suspension would cause great troubleCEHM, Fondo MIX-3 telegram Caballero, Ciudad Victoria to Pablo González, Monterrey, 19 June 1914. Coronel López de Lara reported the same message from TampicoCEHM, Fondo MIX-3 and Archivo Pablo González Garza, roll 50 another telegram núm. 9 Caballero, Ciudad Victoria to Pablo González, Monterrey, 19 June 1914 .

On 5 September the Presidente Municipal of Matamoros asked the governor whether the Caballero notes were of forced circulation and asked him to inform the Jefatura de Armas, which presumably was refusing to accept themAMMat, Archivo General 1914, exp. 1464 minutas de comunicaciones oficiales julio-septiembre. On 22 September, the Tesorería General of the state, in Ciudad Victoria, announced that Caballero had agreed to withdraw the notes and so they could be handed in at the office of the Tesorería GeneralPeriódico Oficial, Tamaulipas, Tomo XXXIX, Núm. 76, 23 September 1914. 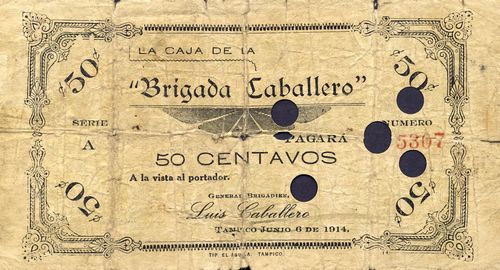 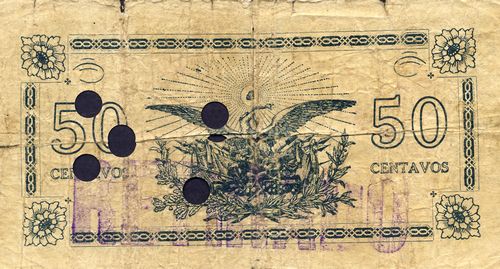 On 2 October the Presidente Municipal of Tampico wrote to the governor in Ciudad Victoria asking him to order the Tesorero General to authorize one of the offices in the city to receive and redeem these notesAMT, Gobierno Estatal, no number letter núm. 357, 2 October 1914. The interim governor, Raúl Garate, replied that the notes were already been exchanged by the Caja of the Jefatura de ArmasAMT, Gobierno Estatal, no number letter núm. 2429, 5 October 1914.

On 8 December Carranza included the notes amongst various military issues that would cease to be legal tender after 1 April 1915 and would be withdrawn by the Tesorería de la Federación. This time limit was subsequently extended on two different occasionson 27 March 1915 and 19 June 1915 but given that this was a local issue it is probable that most of the notes were handed in soon after Caballero’s initial announcement.

What standards does one look for in producing a counterfeit/bogus note? If it is just a souvenir,a simple facsimile will suffice. If it is to fool a collector, then it should mirror as exactly as possible the genuine note. But if it is a contemporary counterfeit to be used as currency, then one needs to consider what is called in modern parlance the“end user”, be it an illiterate peon or an American speculator on the border. This is obviously the reason why so many revolutionary counterfeits are ‘better’ than the original, produced with higher quality paper and inks, correcting typographical errors and other infelicities, and overall creating a far better impression. To give a couple of examples, there are ‘better’ quality Chihuahua dos caritas and Estado de Sonora counterfeits.

In at least one case, however, the counterfeiters went even further. Why expend effort on a reproduction when you can start from scratch?

As seen above, General Luis Caballero’s decree specified that there should be $25,000 in 50c notes and the same amount in $1 notes. These 50c and $1 notes are bog-standard, locally produced efforts with what little ornamentation they have taken from a printer stock type.

There is also a $20 note. This is far more impressive, though it suffers even more from the juxtaposition of too many styles. It has the ubiquitous Mexican eagle, a vignette of a statute, the inscription “EJERCITO CONSTITUCIONALISTA DE MEXICO” and a red validation seal (both used elsewhere on the earliest Carrancista notes) and as well as a reference to the 6 June decree the legend “DE CIRCULACION FORZOSA EN TODA LA REPUBLICA DE ACUERDO CON EL DECRETO DE 12 DE FEBRERO DE 1914”(Of compulsory circulation throughout the Republic (nice touch!) in accordance with the decree of 12 February 1914). Carranza’s decree of 12 February, issued in Culiacán, Sinaloa, in fact authorised an increase in his currency to $30,000,000, and is referred to on the reverse of his Ejército Constitucionalista issue.

However, it is a contemporary counterfeit. Some features were copied from existing notes. The central vignette on the reverse was engraved by the American Bank Note Company in November 1881 and used on seven denominations of the Banco Mercantil Mexicano and the $20 value of the Banco Nacional de México,

whilst the border on the face comes from the same $20 Banco Nacional de México note and explains the ABNC imprint.

On 8 December 1914 Carranza, from Veracruz, issued a decree establishing which issues were acknowledged by his government and stating that from 1 April 1915 Caballero’s notes, along with other emergency issues, would cease to be legal tender and would be exchanged in due course. On 1 March 1915 his Secretaría de Hacienda, in its circular núm. 11, authorised the Jefaturas de Hacienda and Administraciones del Timbre to exchange these issues for others of legal tender. A fortnight later, on 15 March, the Secretaría issued its circular núm. 17 warning its offices that these $20 Caballero notes had appeared in the market, and confirmed that Caballero had only issued 50c and $1 notes and that these $20 notes were in fact counterfeitEl Democrata, Tomo I, Núm. 141, 16 March 1915; not officially printed in the Periódico Oficial until late June (Periódico Oficial, Tamaulipas, Tomo XL, Núm. 33, 19 June 1915). This circular was received in Querétaro on 7 May and passed on to the Administrador del Timbre and publishedAQ, Fondo Poder Ejecutivo Sec 2ª Hacienda C-1 Año 1915 Exp. 144. It was published in Ciudad Victoria, Tamaulipas on 16 June.

On 28 November 1915 the agents of Pablo González’ special police in Veracruz, Alvaro B. Gómez, Luis Ontiveros and Agustín Reverter, reported that an American, Louis Federick Thomsson, along with his brother, was involved in putting counterfeit Obregón and Caballero notes into circulation in Tampicoprívate archive (information from Angel Smith) report of Alvaro B. Gómez to General Alfredo Rodríguez, Jefe del Estado Mayor, 28 November 1915. They do not specify the denominations.