The interest of the Veracruz elite in the banking system was manifested by several of them acquiring shares in the Banco Nacional Mexicano in 1882. After the merger of the Banco Nacional de México in 1884 it maintained a branch and various agencies in the state, competing at this time with just the Banco de Londres y México.

As a result of the passing of the Ley General de Instituciones de Crédito on 14 October 1897 Zaldo Hermanos y CompañíaZaldo Hermanos y Compañía was founded in 1857 by the Spaniard Bruno Zaldo. a brilliant merchant with a creative entrepreneurial mentality. It grew to invest in several areas of commerce and expanded to other cities in Puebla, and to Oaxaca and Tabasco. In the port of Veracruz it was an importer and exporter, and owned a store famous for its English and French finos casimires and telas for women, imported from Europe and the United States.
In the the national banking sector it was a founder of the Banco Mercantil de Veracruz (directly controlling 81.2% of the initial stock), and shareholder in the Banco Nacional de México and the Banco de Londres y México. It also had shares of the Banco Mercantil Mexicano, Banco Oriental de México, S.A., in the Almacenes Generales de Depósito, as well as in the Banco de Tabasco.
In the textile sector it owned Fábrica de Hilados y Tejidos de Algodón San Bruno in Xalapa and La Purísima in Coatepec.
It owned the sugar hacienda de San José de Abajo in Córdoba. It also owned a coffee mill with which it processed the coffee beans that he acquired from individual producers and then marketed the cofee on the international market.
Among their other interests, the Zaldos financed La Tabacelera Mexicana, Mexico's second largest cigarette manufacturer. The Tabacelera was a partnership formed in 1899 by the Zaldos, Antonio Basagoiti, the firms of Solana Barreneche y Compañía and Martinez y Compañía. The Tabacelera controlled approximately twelve per cent of Mexico's cigarette market.
The company ran steamships and was a shareholder of the shipping company Pinillos Izquierdo y Compañía with branches in Cádiz and Barcelona.
At the beginning of 20th century the company was run by Román Zaldo, founding member of Cámara Nacional de Comercio. , Palomo y Compañía and José Breier, all members of the Veracruz elite, asked for authorisation to establish a bank of issue in Veracruz, and this was granted on 18 October. In fact the first subscription for shares was so successful that the bank asked to double its share capital to two million pesosThe first board was composed of Anselmo Román Zaldo as president; Antonio Palomo as vicepresident with Primer Vocal Secretario Jacinto Villacieros Benito; Segundo Vocal Propietario Esteban J. Pons; Primer Vocal Suplente Antonio G. Presno; Segundo Vocal Suplente E. Speckter; Tercer Vocal Suplente C. Pardo y Sáinz; Cuarto Vocal Suplente Laureano Alvarez; Comisionario Propietario Saturnino Ulibarri and Comisionario Suplente Manuel Gómez O.. 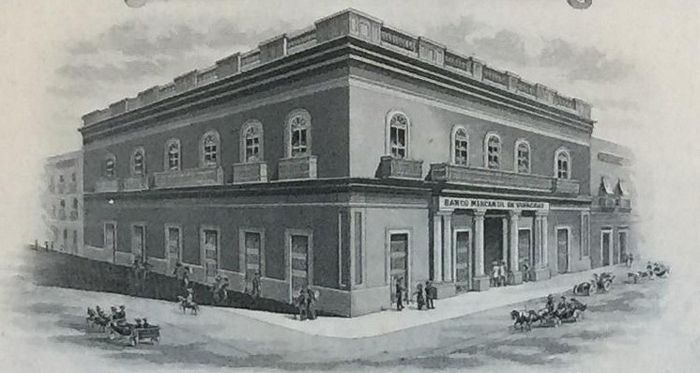 The first meeting of shareholders of the bank was held on 15 December 1897, and they asked that a special note (billete) be made for the bank’s promoter, Anselmo R, Zaldo, and that his portrait be hung in the bankLa Época, Veracruz, Tomo II, Número 314, 19 December 1897.

The bank originally suffered from the fact that use of its notes, unlike those of the Banco Nacional de México, were limited to within the state but in 1904 the bank signed an agreement with the government of Veracruz by which it provided banking functions to the government which in turn gave it privileges and accepted its note in all its offices.

Other branches were opened in Orizaba (1904), San Andrés Tuxtla on 1 September 1905Memoria de las Instituciones de Crédito correspondiente a los años de 1904-1906, vol. I, tomo 2 report of interventor, 16 January 1906. Braulio Chamarro, from Velilla de Medina, Spain, came to Xalapa in 1901, and ran the La Castellana business, owned by Celestino Chamarro. In 1909 he became the manager of the branch in San Andrés Tuxtla and Córdoba on 20 May 1908In 1908 the bank agreed that Castro J. Oropesa should prepare the necessary documentation and other details for the opening of a branch in Córdoba. It appointed the Spaniard Leonardo Penagos as consultor propietario (Penagos owned a grocery warehouse, dealt in fruits and vegetables, served as an exporter as the main shareholder of the Emporio del Café S. A. and owned the hacienda Venta Parada in Amatlán), Manuel Unanue as consultor suplente, Antonio Carlín as manager, Castro Oropesa as accountant and Alejandro Frasser as subcajero. and agencies in Puerto México (now Coatzacoalcos) (1906) and Tuxpan (1910).

In the face of the 1907 banking crisis the Banco Mercantil was cautious and reduced its issue of banknotes and credit. During the period 1908-1915 the bank survived but not without difficulty and the expansion was slowed and several branches and agencies even closed. Despite this it maintained profitability until the revolution. On 31 January 1916 the Comisión Reguladora y Inspectora de Instituciones de Crédito found that the bank conformed with the law and reasserted its concession.

Following Obregón’s decree of 31 January 1921 and an examination of the bank’s books and records, on 28 March 1921 the Secretaría de Hacienda authorized the reopening for businessEl Paso Herald, 11 April 1921. The  bank finally went into liquidation in 1930.

The American Bank Note Company produced the following notes. The company engraved a view of Veracruz (C 651) for all the backs and a vignette of a group of Mexican cavalry (C 662),