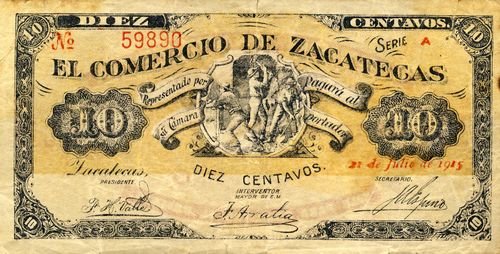 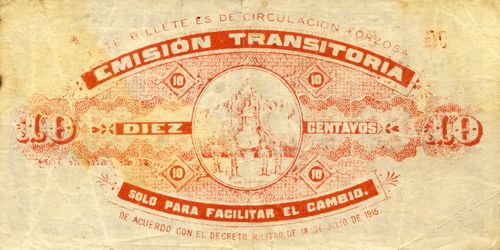 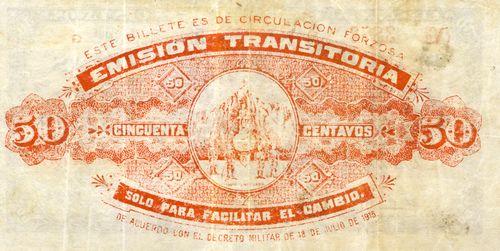 These were signed by F. H. Valle, president, and J. A. Espino, secretary of the Chamber and Mayor F. Arratia as Interventor.

On the reverse, besides referring to the military decree, the notes stated that they were a temporary issue solely for the purpose of facilitating the making of change.

The Carancistas recaptured Zacatecas in August 1915. General Francisco Murguía with the support of the generals Cesáreo Castro and Benjamín Hill took the town and immediately named General Rómulo Figueroa as Interim Governor. On 27 August the Jefe Político, L. T. Villaseñor, put out a flyer, reminding the public that, amongst others, the notes issued by the local Cámara de Comercio were of forced circulationAMZac, Jefatura Política, caja [ ], exp. 92, folio 1.

A Comisión Reguladora del Comercio in Zacatecas was established by governor Carlos Plank on 13 May 1916Periódico Oficial, Año 2, Tomo 2, Núm. 40, 13 May 1916. This validated some of these Chamber of Commerce notes. 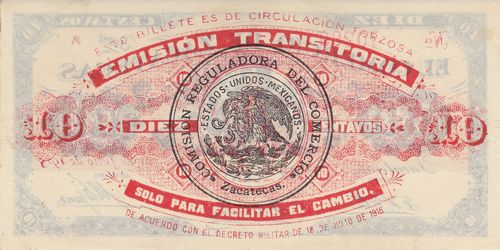 By February 1916 the need for these notes had passed and Figueroa ordered their withdrawal. Holders could present them for exchange at the Oficina Reguladora del Comercio.